Need a New Liver? Print One.

Well, not quite yet. 3D printing continues to garner lots of press and attention. It truly has become a way to leverage 3D data generated from many different sources. The medical product industry has embraced additive manufacturing and continues to find new applications for the tool.

A corollary use for 3D printing applies to surgical simulation. For example, training surgeons in the use of new medical tools using 3D printed organs instead of a patient. The following article from the Wall Street Journal details this approach. Enjoy.

3-D
Printing Is Ready for Surgery

Surgeons Practice With Replicas of
Patients' Organs Before Surgery 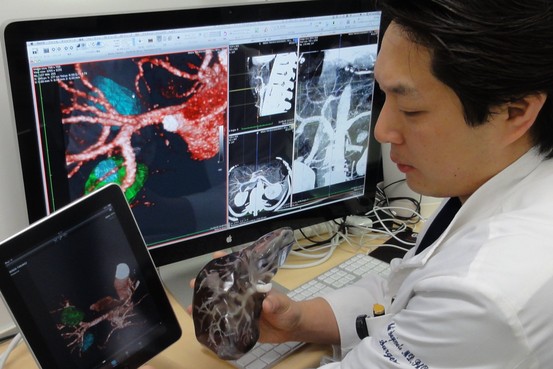 Surgeons at a hospital in Japan recently faced a
dilemma before transplanting a parent's liver into a child: How exactly to trim
the organ to fit the space in the child's smaller cavity while preserving its
functions.

So they took a knife to a three-dimensional replica
of the donor's liver built by a machine that resembles an office printer. The
model helped the doctors figure out where to carve it, leading to a successful
transplant last month.

Surgeons are finding industrial 3-D printers to be
a lifesaver on the operating table. This technology, also known as additive
manufacturing, has long produced prototypes of jewelry, electronics and car
parts. But now these industrial printers are able to construct personalized
copies of livers and kidneys, one ultrathin layer at a time.

The medical field in particular is expected to
benefit greatly from 3-D printing. Scientists are working on ways to print
embryonic stem cells and living human tissue with the aim to produce body parts
that can be directly attached to or implanted in the body. 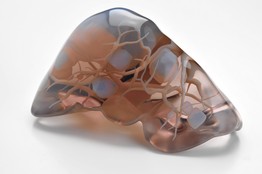 A 3-D replica of a patient's liver.

Printing out artificial body parts is likely many
years away, but advanced 3-D printers are starting to make their mark at
hospitals.

Using medical images such as CT scans, these
printers can construct translucent models made with variations of acrylic
resin, enabling surgeons to understand the internal structure of the livers and
kidneys, such as the direction of blood vessels or the exact location of a
tumor.

A more realistic-looking model, made partly of
polyvinyl alcohol, assimilates the wetness and texture of a real human liver,
making it more suitable to cut with a surgical knife.

It usually takes several hours to a half day to
print a copy of a human organ depending on its size. The whole process,
including the time to convert the original medical images to printable 3-D
data, usually takes a few days.

"Today, most medical uses [of 3-D printers]
are still experimental, but we are seeing more and more applications,"
said David Reis, chief executive of Stratasys, based in Eden Prairie, Minn.

There are many hurdles, to be sure, before the
technology can become widespread in operating rooms at hospitals world-wide.
The kinds of advanced 3-D printers used to create organ models can cost between
$250,000 to $500,000, making it difficult for smaller hospitals to install
them.

As most doctors don't know how to use those
printers, hospitals need engineers to operate the printers and help convert
images from computed tomography and other medical equipment to 3-D data that
can be printed out.

Maki Sugimoto, a surgeon at Japan's Kobe
University Hospital who began using replicas of patients' organs for navigation
purposes in 2011, employs Japanese company Fasotec Co. to produce the 3-D
models. Fasotec acts as an intermediary between the hospitals and printers.

Fasotec says it is still rare for surgeons to
request 3-D replicas of internal organs—more typical are basic 3-D copies of
bones.

At Hong Kong's Dental Implant & Maxillofacial
Centre, oral surgeons have been using 3-D printers for a few years to create
not only a copy of the patient's jaw to plan surgeries, but also a custom-made
surgery template that can be placed inside the patient's mouth during the
operation so the doctor knows exactly where to insert implants.

Efforts to promote 3-D printing for surgical
purposes come at a time when the technology is evolving faster, drawing renewed
attention in the media and generating buzz among consumers world-wide.

While 3-D printing has existed for about 30 years,
the rapid progress in technology in recent years, as well as more affordable
price tags, has made the technology more attractive to industries and
consumers.

In the U.S., some universities and corporate
laboratories are conducting research on "bioprinting," or artificial
construction of body parts using living human tissue. Still in the experimental
phase, researchers hope one day to produce personalized body parts on demand,
despite many hurdles including ethical questions.

If doctors feel more confident about the surgeries
they are about to perform, patients will feel more comfortable, Mr. Sugimoto
said.

"The potential impact is no smaller than the
shift from fixed-line phones to mobile phones," he said.

Write to Juro Osawa at juro.osawa@wsj.com

The
photos above were taken by Maki Sugimoto. A previous version of this article
credited Kobe University Hospital for the photos.

A version of this article
appeared April 9, 2013, on page B5 in the U.S. edition of The Wall Street
Journal, with the headline: 3-D Printing, Under the Knife.