One pretty amazing new option in SOLIDWORKS 2016 is the Rename From Feature Tree.  This has been a long time request every year on the Top 10 Enhancements for SOLIDWORKS. 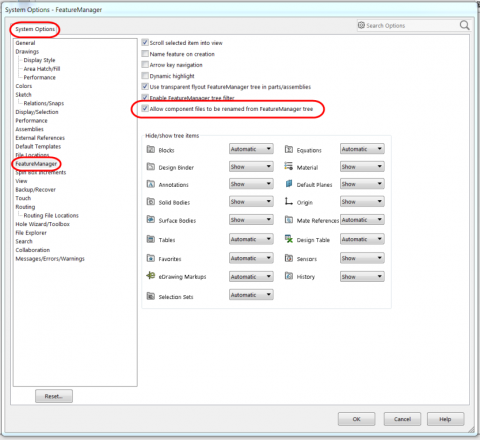 When enabled, this option gives you the ability to rename a part file, just by slowly double-clicking (or F2) on the name in the Assembly Tree.

When you do a rename from the feature tree it will only rename the part in RAM.  You have to then save the assembly, which will also tell you that you need to save the renamed part also.

Then of course the file is officially renamed in windows.

We now need to discuss what this actually does WITH and WITHOUT SOLIDWORKS PDM.

If you did this rename, and saved the assembly and part (as described above), IF you had any other assemblies that needed this file, you have just majorly messed them up of course (same as if you went out to windows and renamed something). Therefore use with caution or finally come to the realization that you really need a PDM system!!

IF you DO have SOLIDWORKS PDM, what happens in the background is that it really does do a “where used” and repoints any (and ALL) assemblies that used the old part to now look at the new part.

BUT it DOES NOT let you know that it did this in all your other assemblies…  You would just have to know that that is the behavior.   Would be nice if it warned you or something at that point.

But then again, if you are doing a rename (not a Save As) you are basically saying you don’t need the “old” named part anymore, so I guess there isn’t really any other thing you would want to still reference the “old” name anyway? i.e. maybe you should have done a Save As or Save As copy instead…

This is really the same behavior you get if you go out to your PDM window and rename there.   You do get to see a where used, and it updates in all the assemblies it was used in as expected.

Like this new feature? Experiencing problems? Let me know in the comments section below!