The “What’s New in 2010” rollouts are nearly over. We have one prime time show in Dayton on November 5th, and a webinar tomorrow. I expect the Dayton rollout to be a huge success since it is in the evening and we don’t have to compete with Oprah.

SOLIDWORKS 2010 seems to be very well received, many people I surveyed are planning on rolling it out in their companies very soon, a slight change from previous releases where many people planned on waiting a service pack or two before upgrading.

It is fun to watch the group’s reaction as they see the new features for the first time. I was rather surprised, but the  area where I saw the most high fives was with the drawing enhancements!

For those of you who like to put a face to the name, Keith Rice made an appearance at the Columbus rollout. 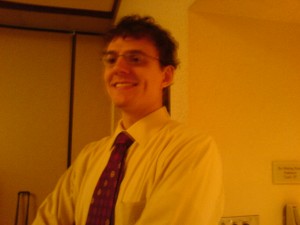 It’s always fun to get the new guy to wear a tie!

It was good seeing everyone again –till the end of January!

How Enterprise saved my weekend

3D Scanning: I Can See It, but How Do I Measure It?

YOU CAN WIN A 3D MOUSE FROM FISHER UNITECH!!

How to set your SOLIDWORKS Spin Box Increments on the fly…