From 1997 to 2008 SOLIDWORKS had a photo rendering product called PhotoWorks that was a very capable application, but way too hard to use. From 2009 to 2010, SOLIDWORKS introduced PhotoView 360 which could help you whip up a great looking rendering in a couple of minutes, but it was a bit too simplistic. Now, in 2011, PhotoView rocks! It’s officially replaced PhotoWorks. By doing so, it’s maintained its simple work flow while giving users the ability to control every last nitty gritty detail they want to get their hands on.

One of my favorite new settings is the ability to easily create displacement mappings (notice Santa’s hairy beard and fuzzy fur ball on his hat). If you’d like to learn how to do this as well as just learn the basics of the new interface, feel free to download my SOLIDWORKS World presentation below. 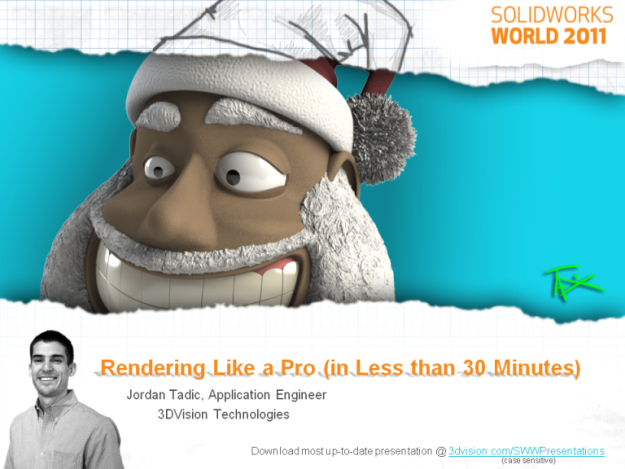 If you’d like to check out the Santa model, you can download it at a great new online CAD sharing website called GrabCAD.  I would have uploaded it to 3DContentCentral, but they have a maximum file size that I exceeded.  GrabCAD already has a ton of great models and a slick interface that allows you to upload a rendered image with your model so other community members can see your models in all of their glory.

Finally, I have to point out even more customization that’s available through PhotoView 360 2011.  Because PhotoView was originally developed by Luxology, we’re going to begin getting opportunities to take advantage of Luxology’s online appearance/scene libraries.  Just recently, they released a set of 51 brand new scenes that can be imported directly into SolidWorks.  Check it out… 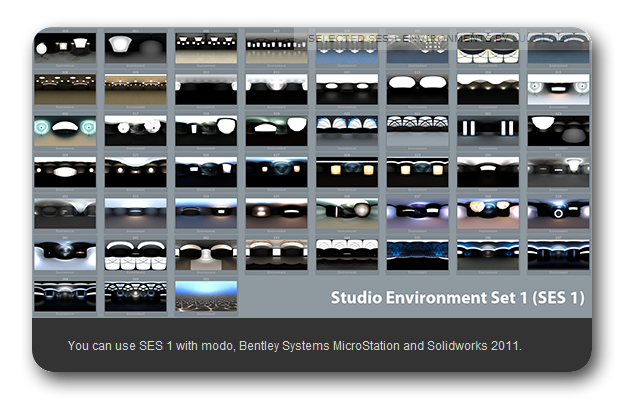