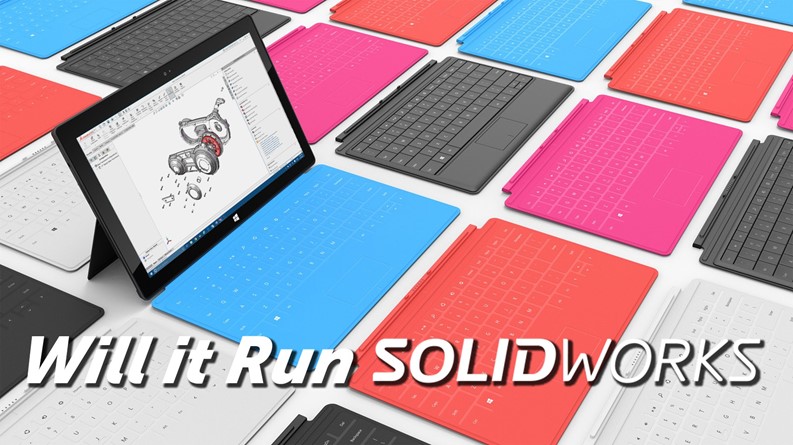 This holiday season, I had the pleasure to play with one of the new Windows Surface Pro 4s and I was pretty impressed. But, will it run SOLIDWORKS?  This is the question I plan on answering very soon here on the CATI Blog. But first, I thought we would go through standard unboxing and technical specs to see if there is anything either missing in the box or the Surface itself. In my opinion, the only thing that is really missing from the box is a keyboard cover.

Ok, so the model I have is the $999.00 model which comes with the following specs:

Upfront thoughts: The i5 chip sets are not something that we have ever tested heavily here at CATI before, but the performance for 2.4 gigahertz process seems pretty solid

Upfront thoughts: This display is crisp like no other. 2736 pixels across by 1824 pixels high is a very dense at almost 270 pixel per inch of display. With that said your Windows profile will load with the user interface being loaded at 300% scale just so you can see what you are doing. I reduced that to about 200%.

Upfront thoughts: I usually start any machine with 8 or 16 of ram but that would increase this by 400 to 800 hundred dollars, ouch!

Upfront thoughts: Not on the supported list from SOLIDWORKS, not if it will ever be, will not support realview graphics and things like Zebra strips and draft analysis may have problems. It has 24 EUs (Execution Units) running 1050 Mhz the graphics that is going to be have to rely on the system RAM due to no dedicated graphics RAM. The performance of this card varies a lot on other tests I've seen, being this an i5 with 4gig of RAM it's going to run slower. I'd give it a 5 out of 5 on the, "This is going to be the problem with this system running SOLIDWORKS.

Upfront thoughts: I'd like more but I'll take it

Upfront thoughts: You are going to want to buy a Logitech Unity Keyboard and Mouse because you only have one port. Unless you buy the keyboard cover which I suggest.

So next, we will run the thing through some paces and see how it performs.

How far can you chuck a pumpkin? Let SOLIDWORKS Simulation solve it for you.