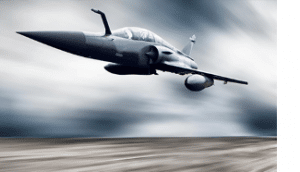 The aerospace industry is one of the most powerful in the United States, and produces everything from airplanes to missiles and spacecraft. According to the International Trade Administration, the “U.S. aerospace industry contributed $147 billion in export sales to the U.S. economy,” including aerospace parts like jigs, fixtures, and production parts.

Original Equipment Manufacturers (OEMs) who make these parts know there’s money to be made in aerospace, but the close regulation of products can make production complex and expensive. To counteract this, companies are adopting new techniques to streamline their processes and save on cost: they’re 3D printing the parts.

Although the earliest airplanes were made largely of wood, modern aircraft are typically made of a combination of materials, including titanium, graphite-epoxy, steel, and aluminum. The materials used for each part depend on the physical properties, thickness, and shape required; steel, for example, is typically used in landing gear because of its strength. Turning these materials into parts is labor- and time-intensive, and many OEMs looking for alternative solutions have turned to 3D printing to get the job done. This is largely because 3D printing can be done faster and more efficiently than traditional methods, while still producing parts at a lower cost.

For example, GE Aviation found it could create a 3D printed fuel nozzle that was five times more durable and 25% lighter than the fuel nozzles created with traditional manufacturing. While the old fuel nozzle required 20 separate parts to be welded together, the 3D printed version could be produced as a complete part in one print job.

Much of 3D printing’s success in the aerospace industry lies in its materials, which have chemical and mechanical properties that meet or exceed those of their traditional counterparts. Unlike their traditional counterparts, however, 3D printing materials do not require welding or complex machinery; they’re simply printed in one piece. This allows manufacturers to cut down on lead time while still producing quality parts.

ULTEM 9085 has a high strength-to-weight ratio and is produced to meet strict procurement requirements. It is flame-retardant with full FST compliance; Kelly Manufacturing has used the material to produce toroid housings with a lead time of three days, a vast improvement over the three to four weeks done with traditional manufacturing.

According to Stratasys, ULTEM 1010 offers the “highest heat resistance, chemical resistance and tensile strength of any FDM thermoplastic.” ULTEM 1010 can be used in the manufacturing of out-of-cabin aerospace components.

Nylon 6 is a strong and tough FDM material that works well for creating low-volume, high-requirement parts on aircraft.

Nylon 12 is another strong FDM thermoplastic, with high impact strength and superior fatigue resistance. According to Stratasys, aerospace applications include custom “production tooling, jigs and fixtures,” as well as “prototypes for interior paneling and low-heat air-intake components.”

Adoption of 3D Printing in Aerospace

With so many options available, many manufacturers are moving forward with 3D printing aerospace parts. Some of the biggest players in the aerospace industry are experimenting with 3D printing’s capabilities, with a focus on accelerating processes and cutting costs. Similar to GE Aviation, Lockheed Martin and Honeywell are “incorporating additively manufactured components in their designs,” while Boeing recently announced the use of over 50 metal 3D printed parts in in its 702 model satellite. Even planes of the future are getting on board — Boom Supersonic, a company focused on high-speed aviation, is looking to incorporate 3D printed parts into their supersonic airliner.

These innovations are expected to drastically increase additive manufacturing’s use; Greg Morris, the leader of GE Aviation’s additive manufacturing team, predicts that additive manufacturing output will grow from $3 billion to roughly $100 billion in coming years. This potential for growth has motivated some companies to capitalize on the trend; Stratasys recently launched an aircraft interior certification that includes certified material, process documentation, and statistical data so aerospace companies and OEMs can more easily certify their parts for flight.

With 3D printing’s current and projected use for innovation in aerospace, it will be interesting to see how companies incorporate 3D printing into their designs, or use its rise to create new business opportunities. OEMs in particular should look at the possibilities of 3D printing to cut costs and improve production processes.