Additive manufacturing has many benefits over traditional manufacturing. One of the most valuable is the ability to create natural and organic geometry. However, modeling natural or organic geometry can seem difficult in SOLIDWORKS. The introduction of 3D textures in SOLIDWORKS 2019 made texturing SOLIDWORKS files very easy (see this earlier blog to learn more), but the capabilities of 3D textures go much farther than applying a simple pattern. To test the abilities of this tool, I took inspiration from the board game “The Settlers of Catan” and recreated pieces from the game in 3D. These pieces were then printed using a Stratasys J750. The design process is outlined below.

To start, measurements were taken of tiles from the original board game and a base was created. 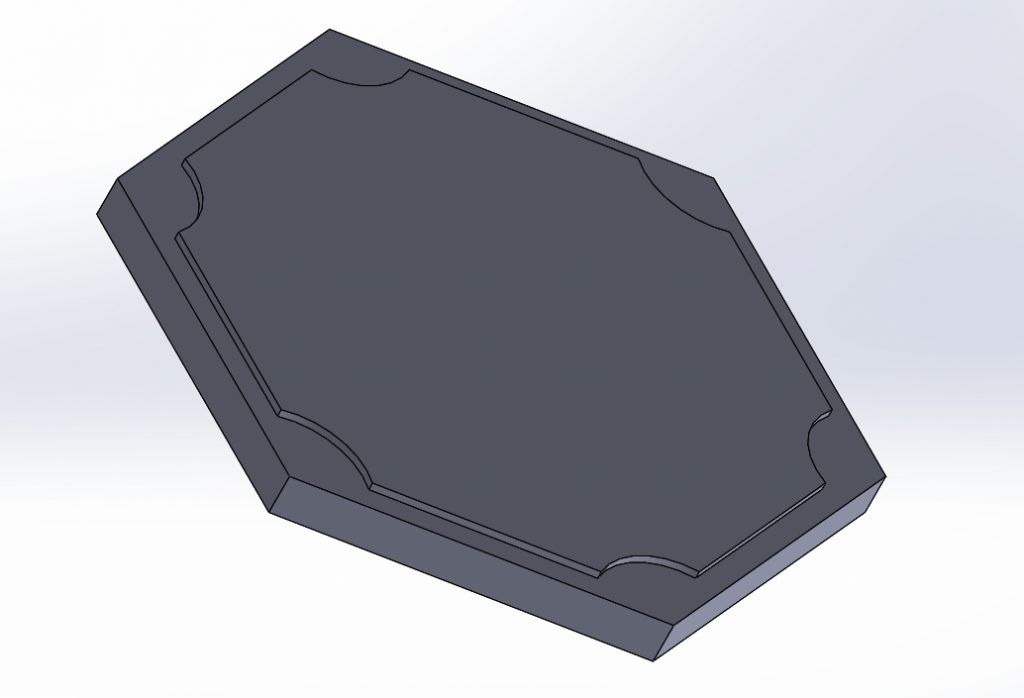 Next came applying the texture. To apply a texture, first right-click the portion of the part to be textured and select Appearances (the colored sphere). 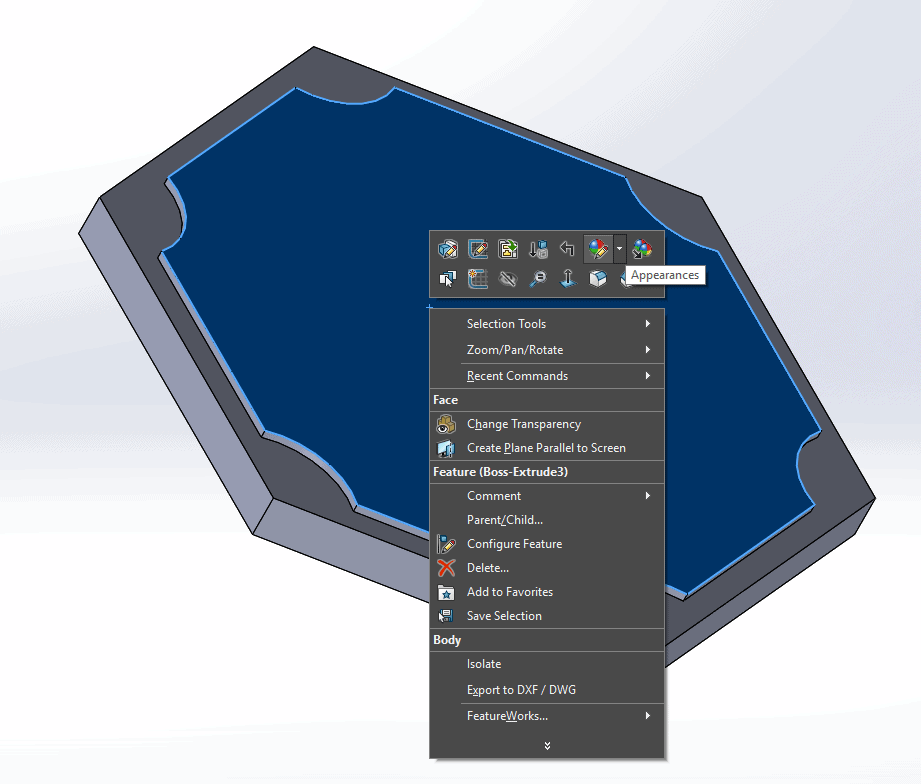 From here, select whether to texture just that face, the feature, or the body. In this case, the face was the portion textured. This is normally where colors are applied to parts. This is also where textures are applied. This is done by selecting the checkerboard pattern labeled “texture”. 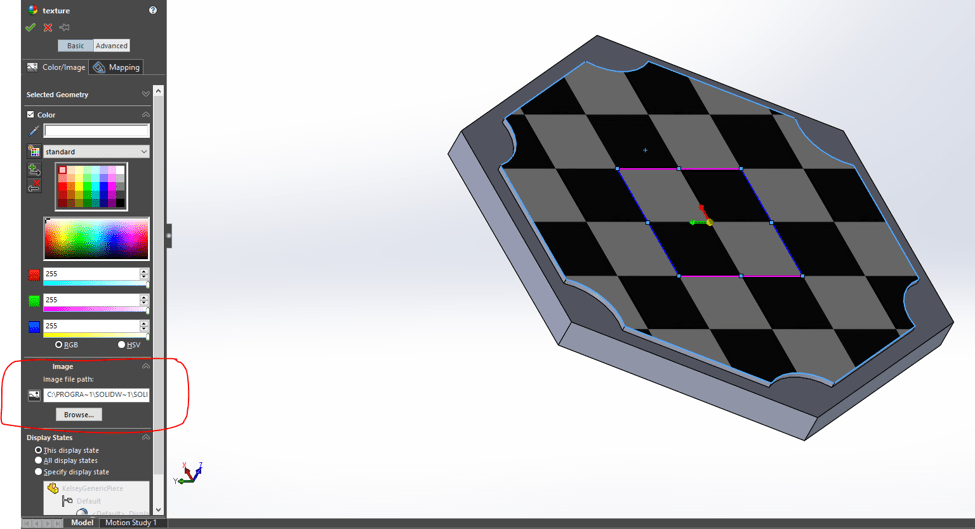 The process of using an external image will be expanded upon in a future blog. For the first board game piece, however, the default checkerboard pattern can be used. Press the green check mark to apply the texture.

Now, to make that 2D texture into a 3D texture, select the solid body with the applied texture from the “Solid Bodies” folder in the feature tree. Once selected, select the tool labeled “3D Texture”. 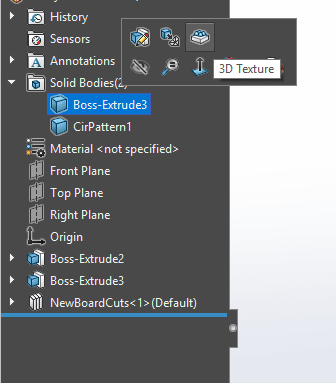 This leads to the 3D Texture options. 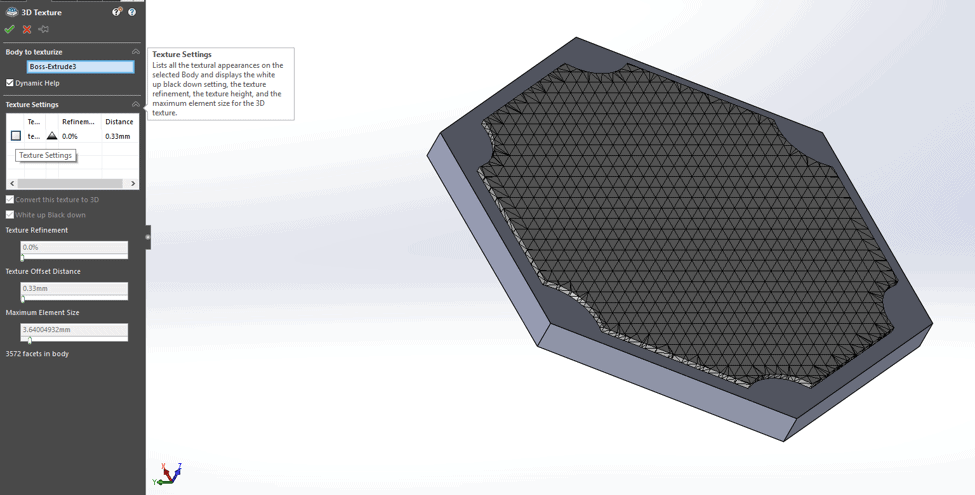 From here, click the checkbox to apply that texture to the part. This is when things get interesting. To create randomized mountain-looking structures for the Stone Catan piece, the “maximum element size” was changed to the largest possible value and changed the “texture offset distance” to be 15mm. This achieves the following texture: 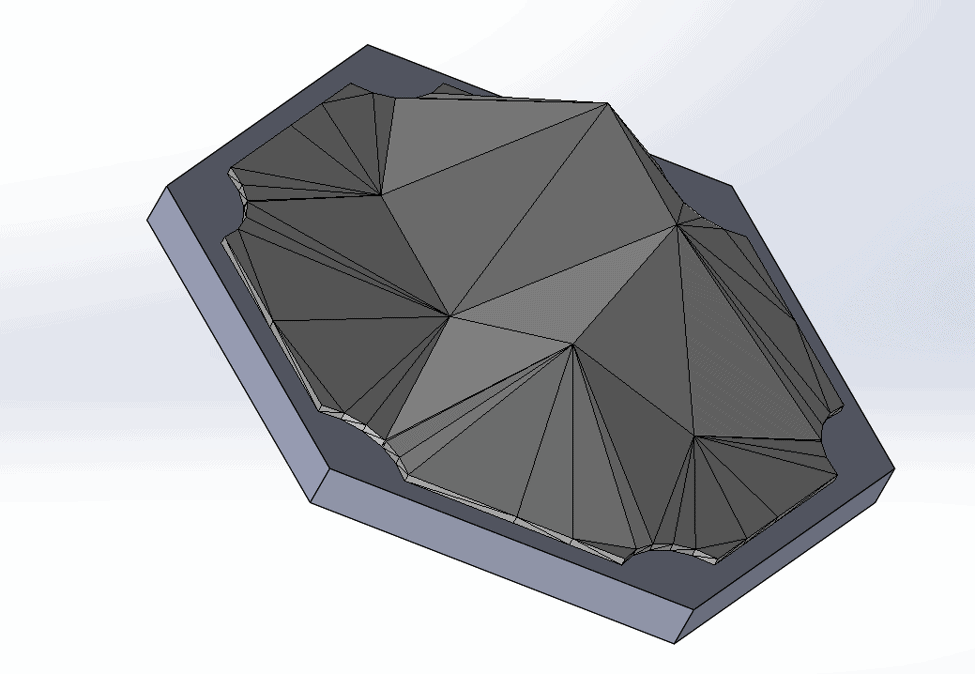 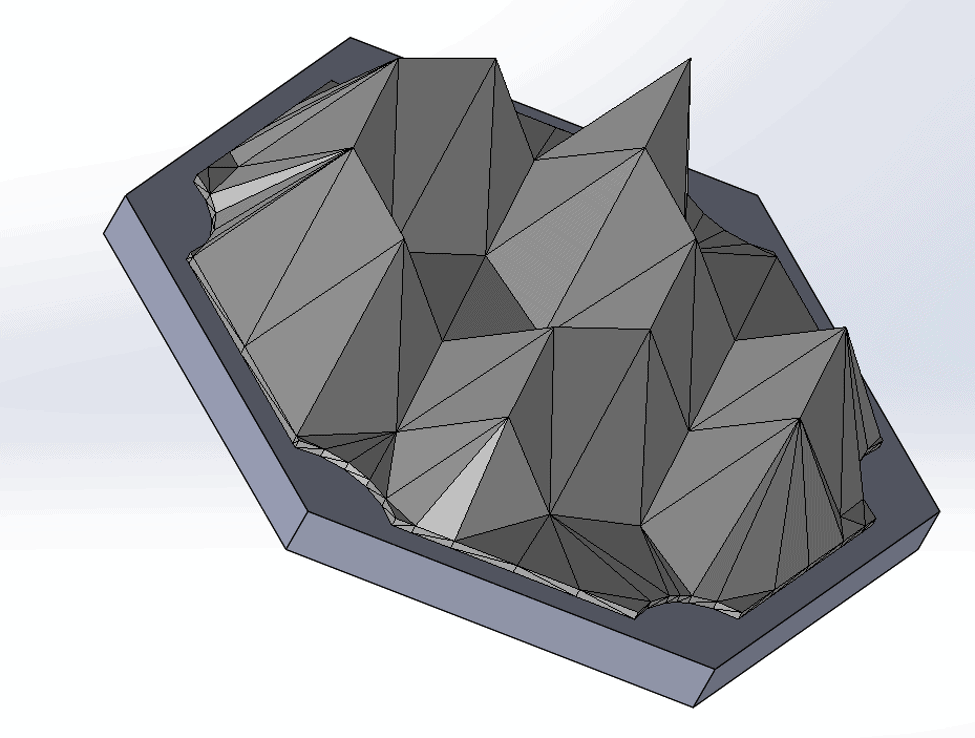 That looks good! After confirming, a new “Graphic Bodies” folder appears in the feature tree. Currently, these spikes are not editable solid bodies, so the next step is to turn them into a mesh. This can be done by right-clicking the graphic body in the feature tree and selecting “Convert to Mesh Body”. 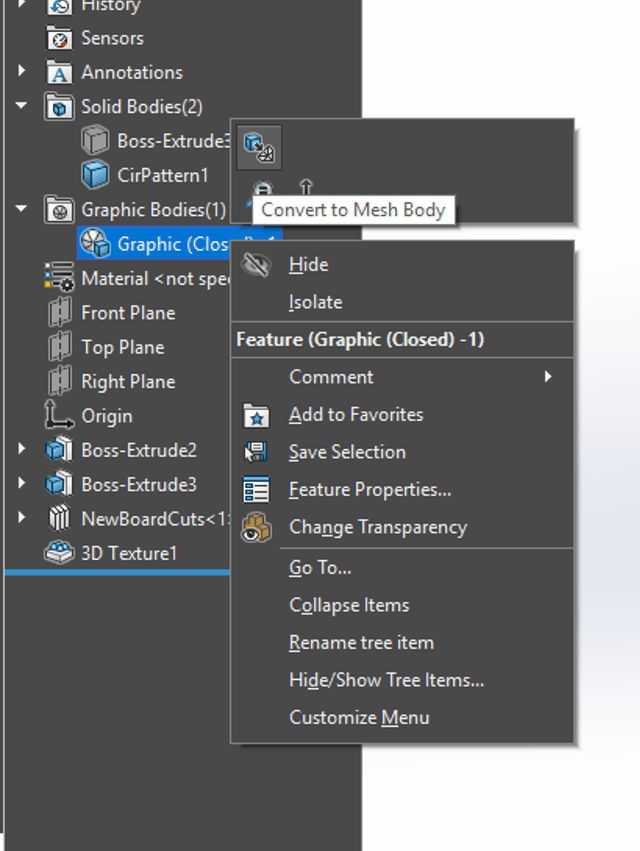 After confirming, the spikes have now turned into a mesh. Now to make the mountain tops snowy. Since these mountains are a mesh they require mesh-editing tools to make changes. An easy way to do this is by using planes and the “Intersect” feature. This will result in the mesh being split into separated solid bodies. Separate solid bodies are a requirement for applying different colors to the part in GrabCAD. This was done by creating a plane 12mm from the base and selecting the plane and the mesh with the “Intersect” tool.

Make sure to check “Cap planar openings on surfaces”. After intersecting, deselect the “Merge Solids” option at the bottom. 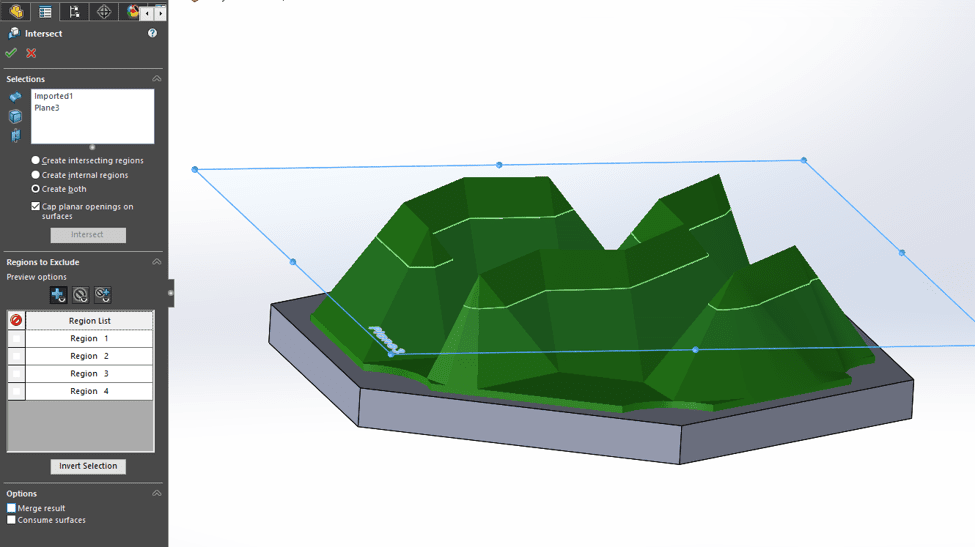 This results in split mountain-caps that can be colored differently from the rest of the mesh.

To make the mountain range a little more realistic, the “3D Texture” steps were repeated to create some foothills. The same checkerboard pattern was used in this step, however the “3D Texture” settings were different. 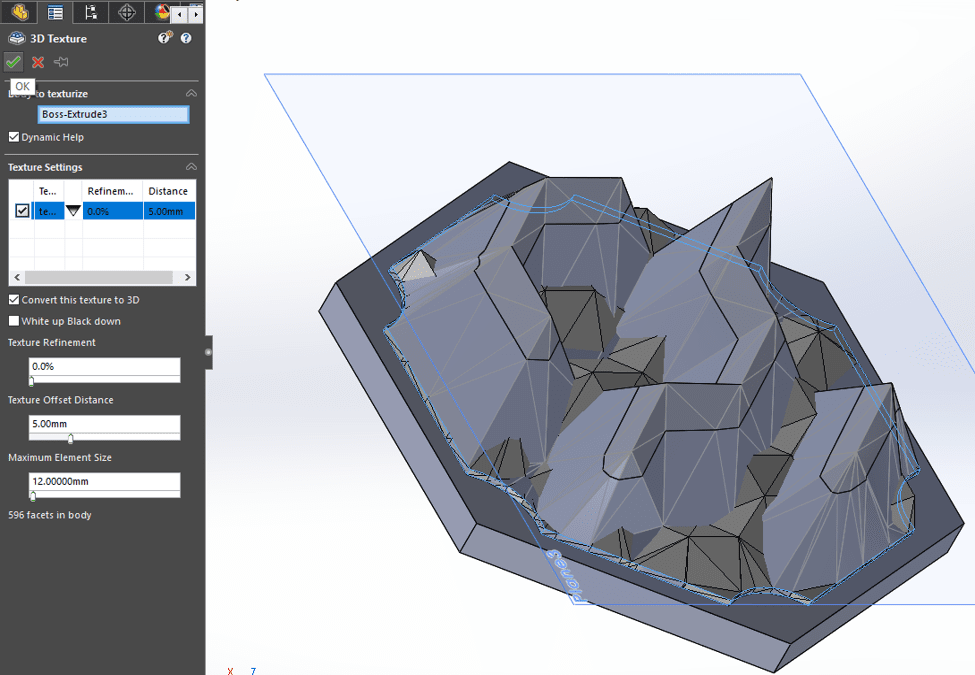 The last part needed to complete this piece is the slot to put the number token. After measuring the piece and accounting for some wiggle room, I created a cylinder extrusion feature from the offset plane from earlier. This solid intersects the original mesh. 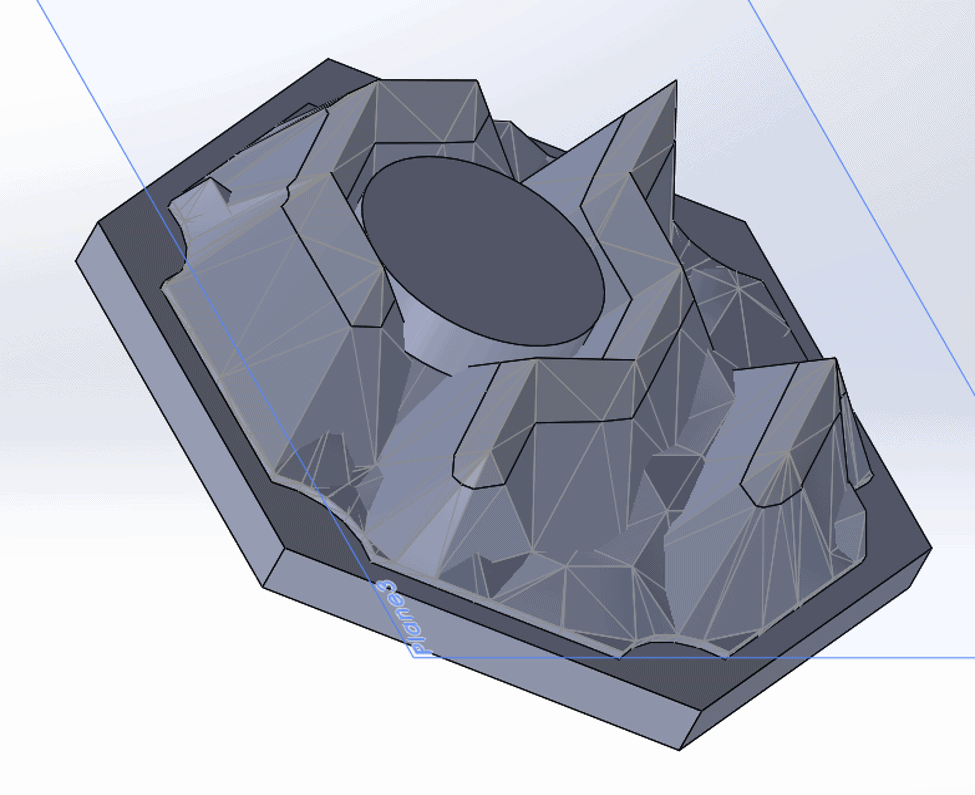 The “Combine” tool is going to be the key to removing the material from the original mesh. To use this tool, the cylinder needs to be a mesh as well. To do this, use the same “convert to mesh body” tool from earlier, only now convert the cylinder feature. 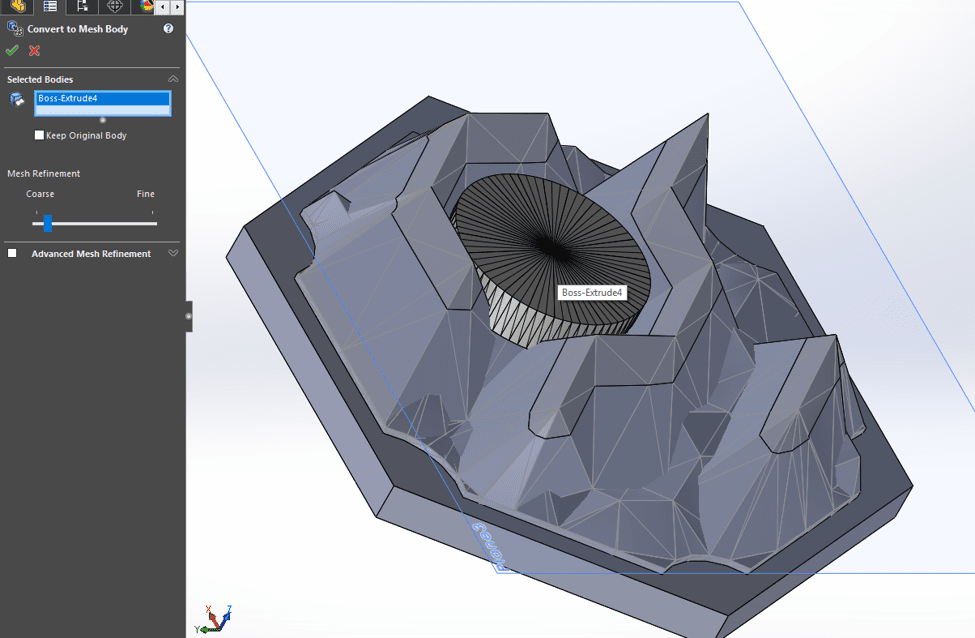 With the cylinder now a mesh, select the “Combine” tool. The tool has 3 functions: Add, Subtract, and Common. In this case, select “Subtract”. 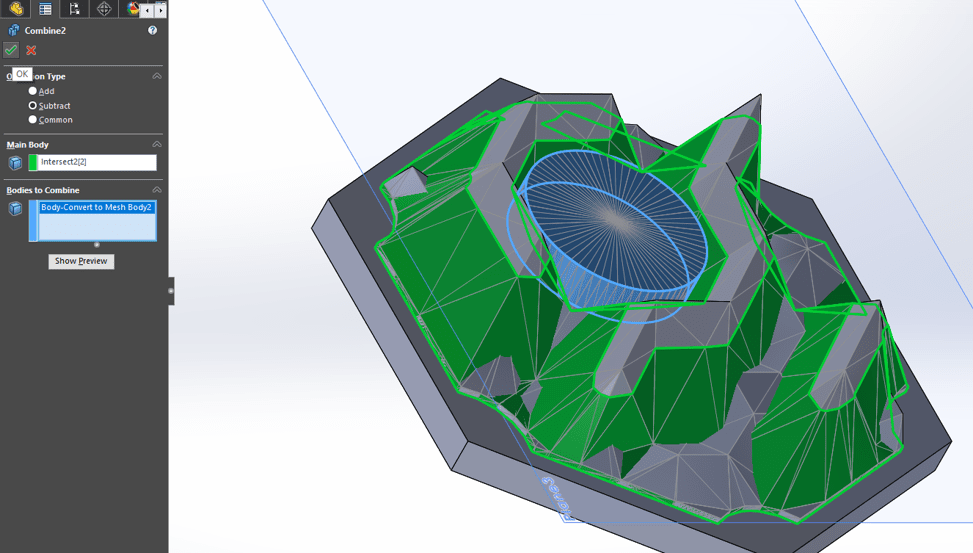 This will subtract the overlapping cylinder volume from the original mesh, resulting in a small resting place for the Catan number token. 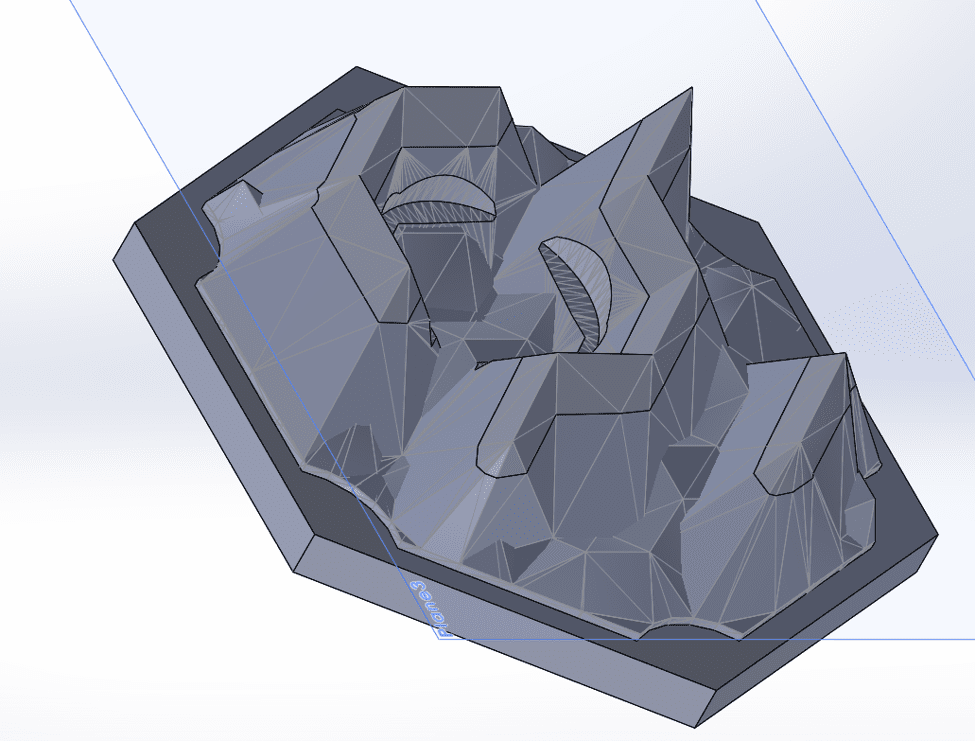 Now to import the part into GrabCAD Print. The part can have a difficult time interpreting the meshes from the Solidworks SLDPRT file. In this case, the SLDPRT file had an error in the base. 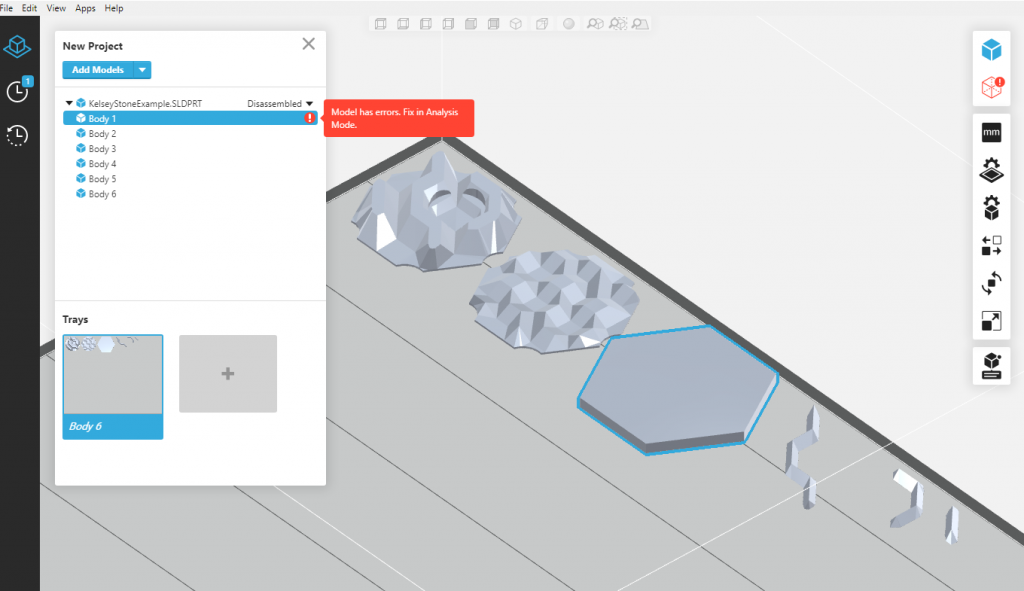 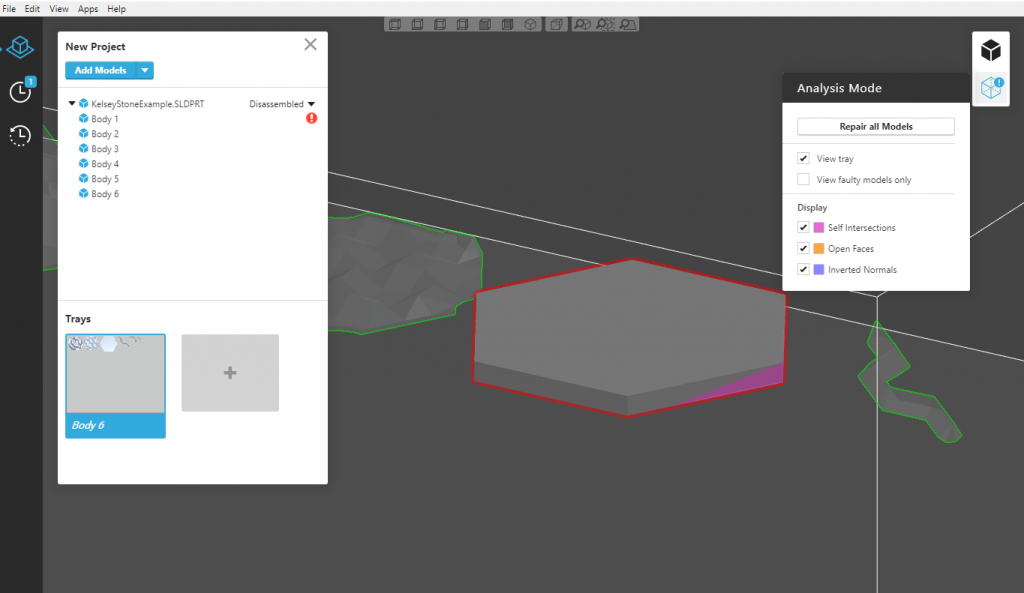 From here, the different solid bodies can be colored and prepared for printing! 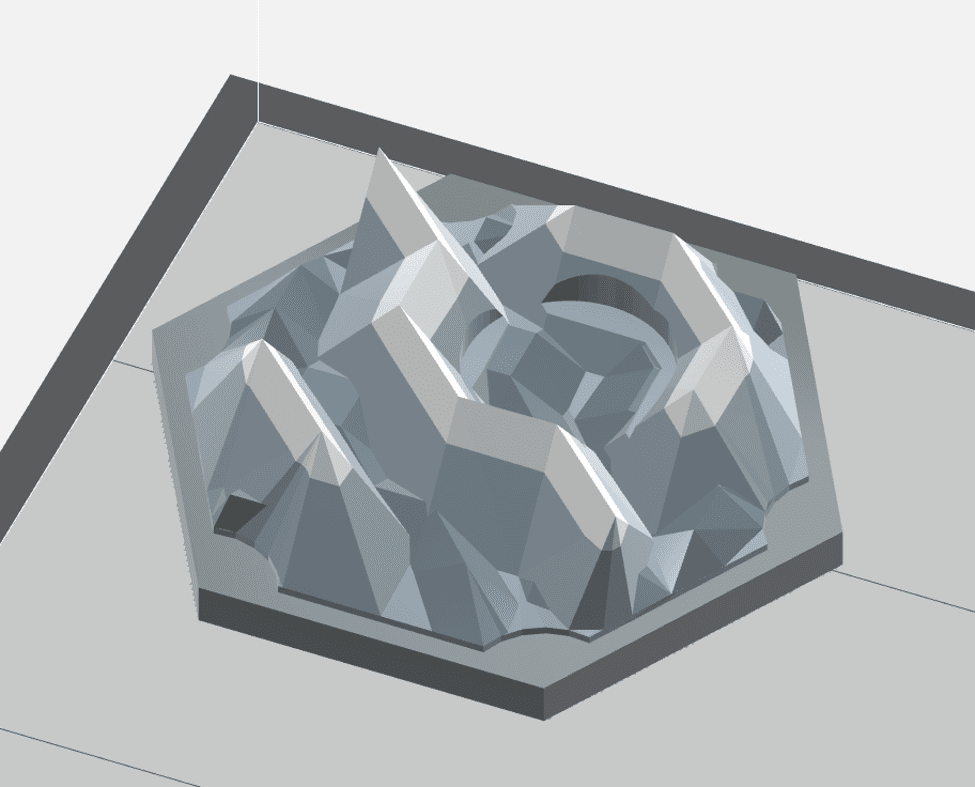 I printed some examples of different Stone pieces I’ve made with this method. These were all created using the default checkerboard pattern. Sometimes the scale of the checkerboard or the texture height were changed. 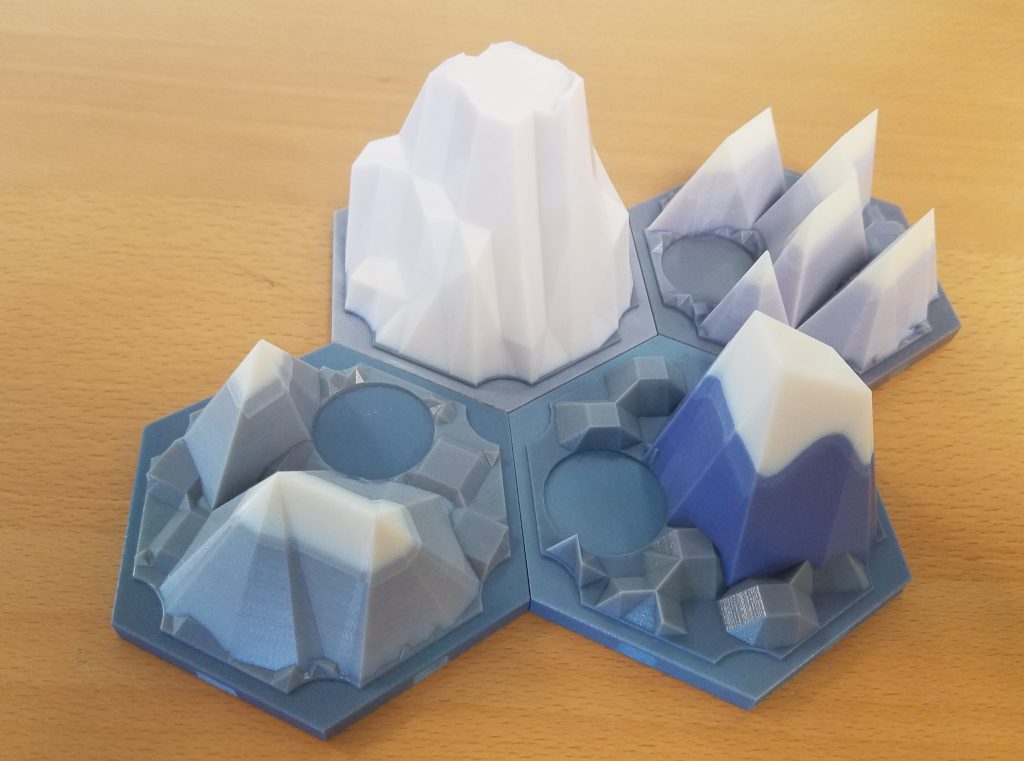 These look much more realistic than the original I created 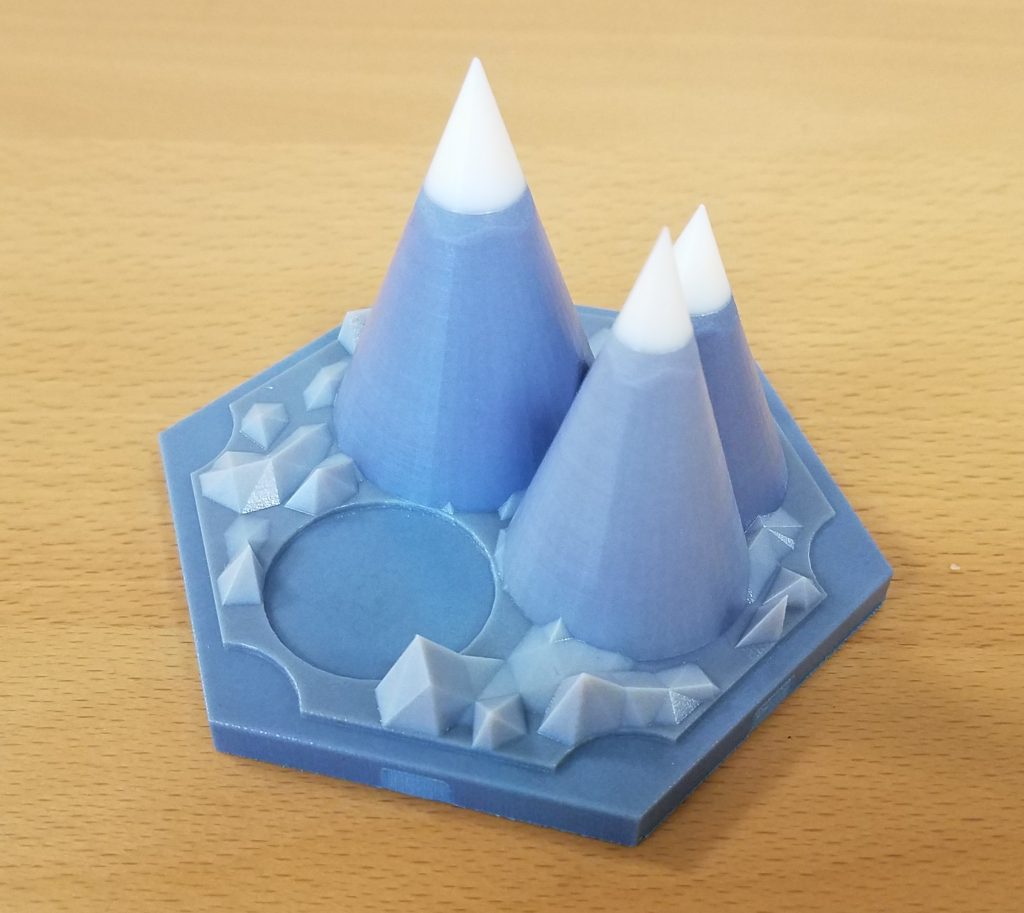 This is just scraping the surface of what the 3D texture tool can do! In the future we will cover customized textures for creating rolling hills and valleys as well as utilizing real-world textures to apply features like ripples of water. Here are some previews: 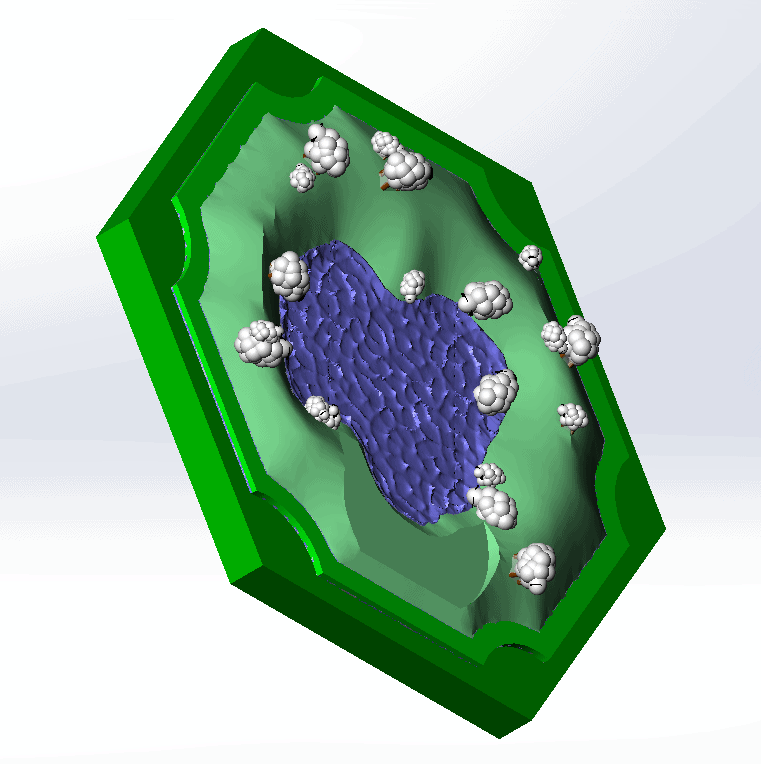 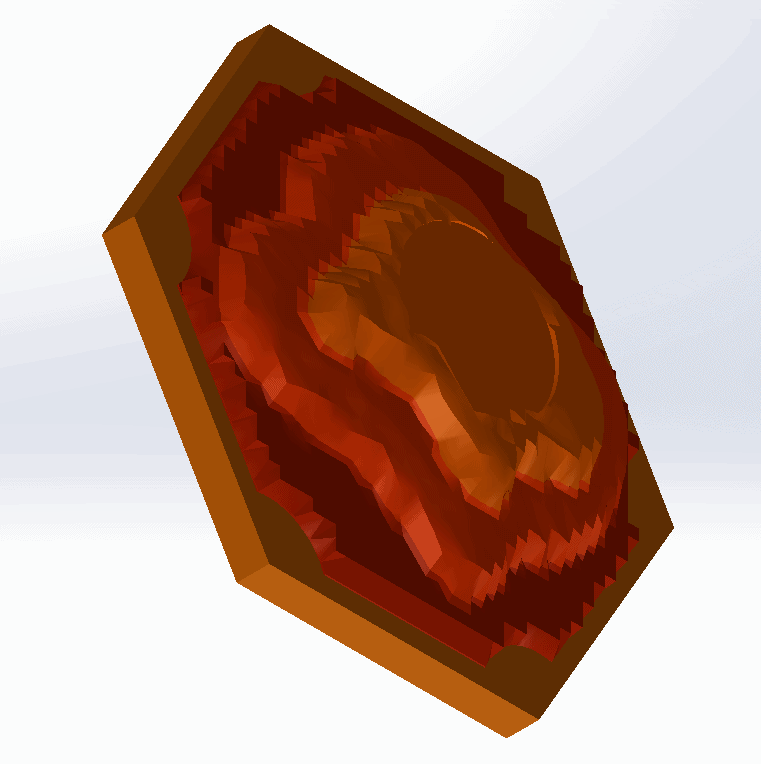 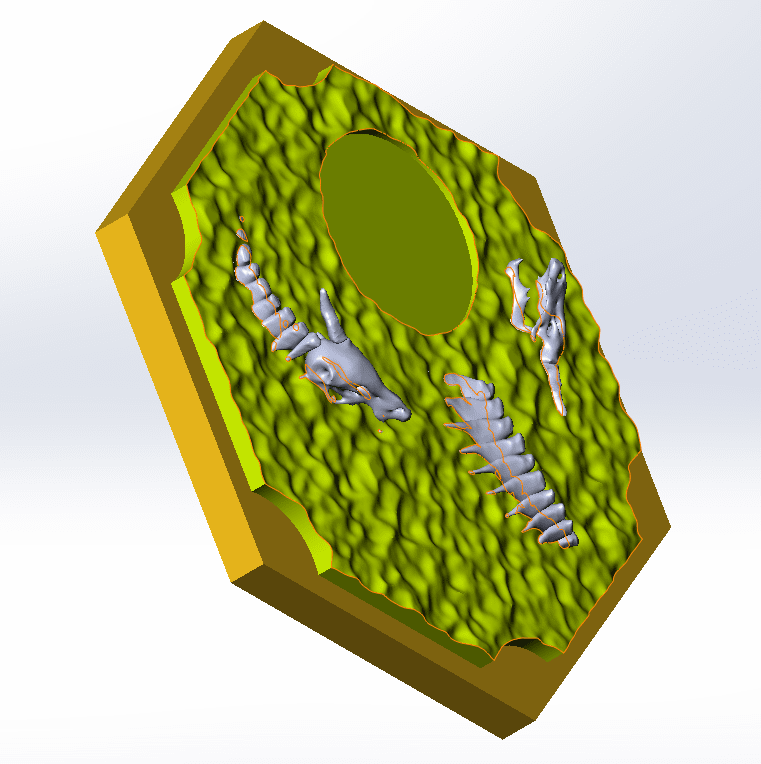