With the release of SOLIDWORKS Simulation 2018 came the addition of a new study type, the topology study. For those of you unfamiliar with Topology Optimization it is a simulation algorithm that specializes in minimizing mass of structures while still resisting loads. It often generates organic looking shapes that traditional engineering practices would not. After a few months of experimenting with it and 3D printing some great stuff with the help of STRATASYS 3D Printers, I have become experienced in driving the topology results to a form that best suits my needs. The goal of this blog is to discuss some of the options available in Topology studies and how they can influence the shape of the result.

A good place to start with any analysis is the study properties. These contain options for the solver and how boundary conditions are applied. In topology analysis there are some useful tools related to preserved regions. By default, a topology study will preserve the faces that have loads or fixtures applied to them. In the study properties though, you can override this by only preserving loading faces, fixture faces, both, or neither. See below: 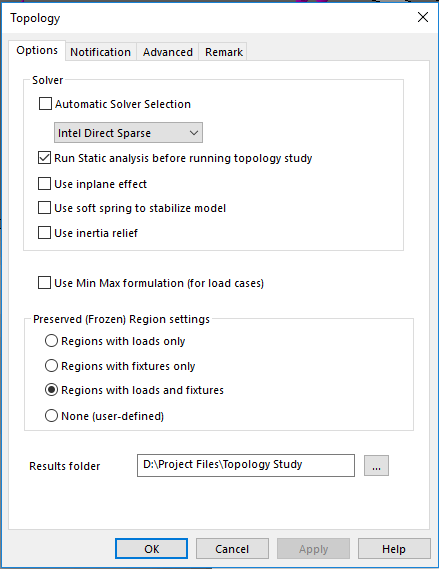 There are useful in instances where the faces that the load or fixture is applied do not need to remain constant. For example: 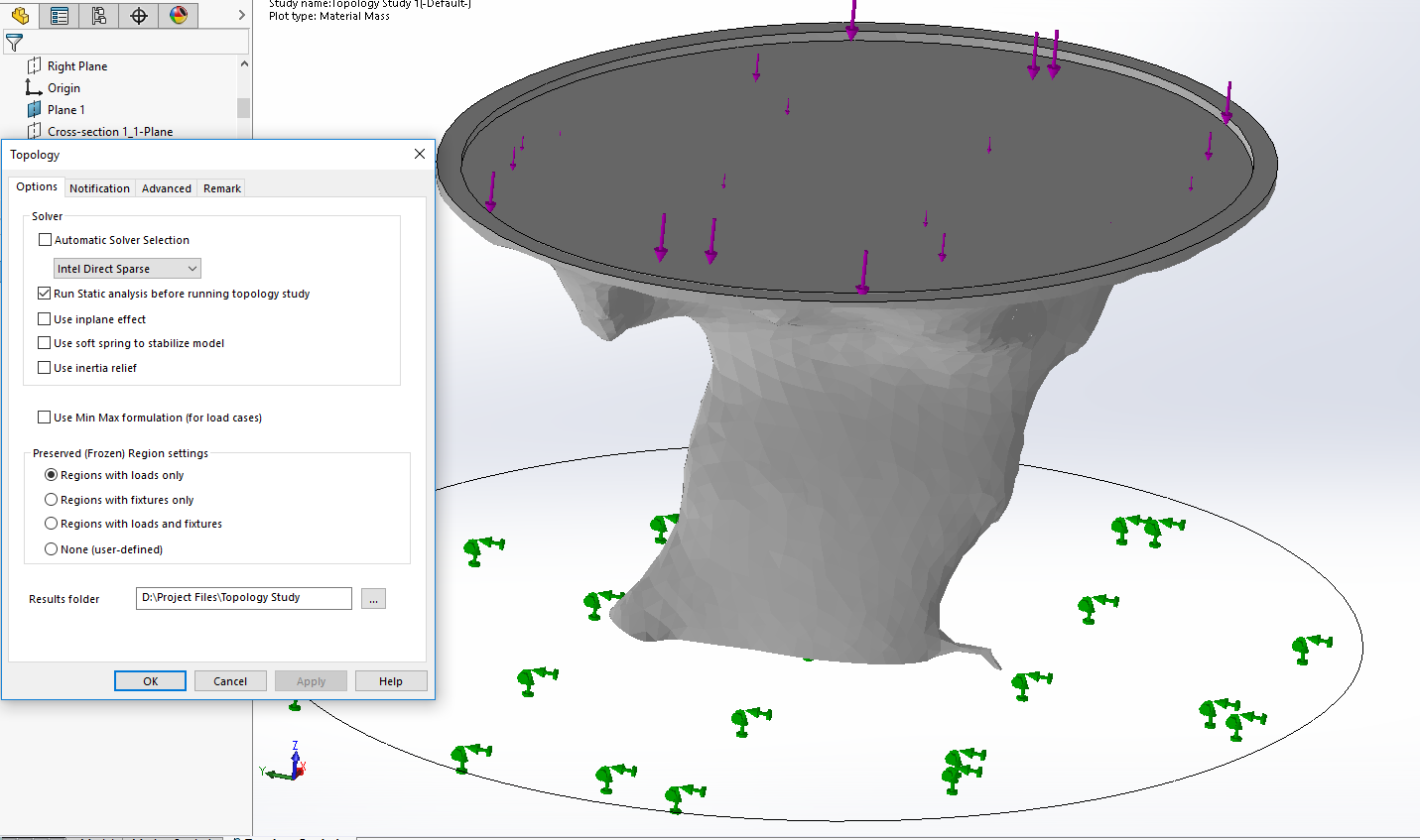 (Above: the bottom of this stand was fixed, but the study settings were such that faces with fixtures can be removed. Only the necessary amount of the bottom face was kept; just enough to resist the load.)

A bit more powerful than the study properties is the option to add manufacturing controls into the topology analysis. 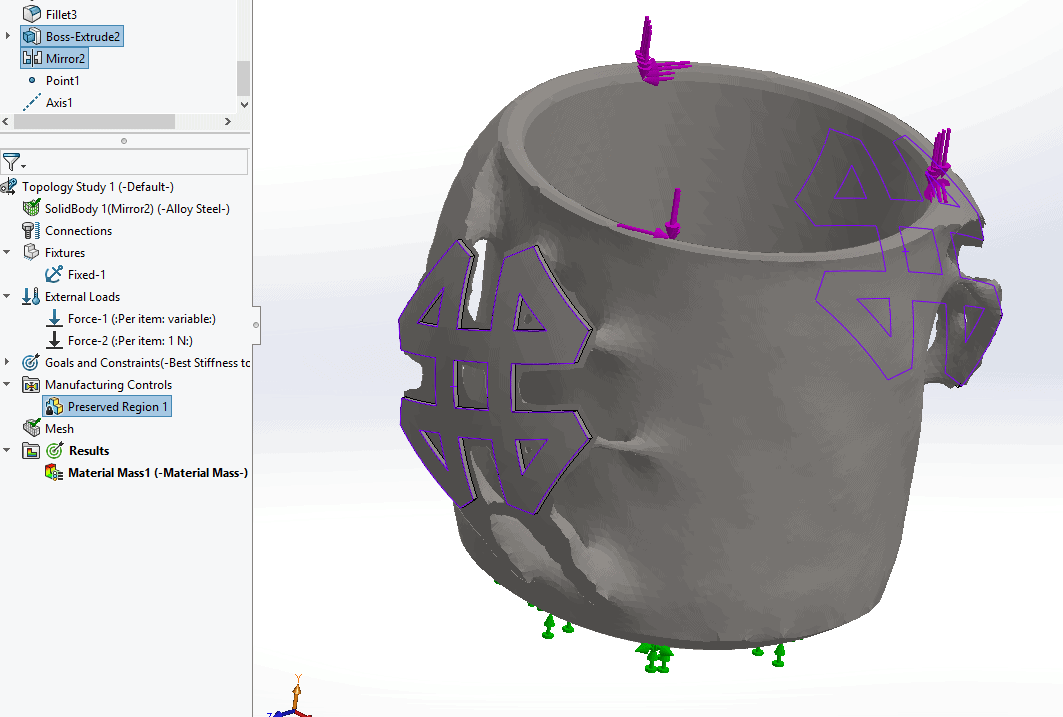 (Above: preserved region is used on the faces that look like the CATI Logo to make a cool looking pencil holder) 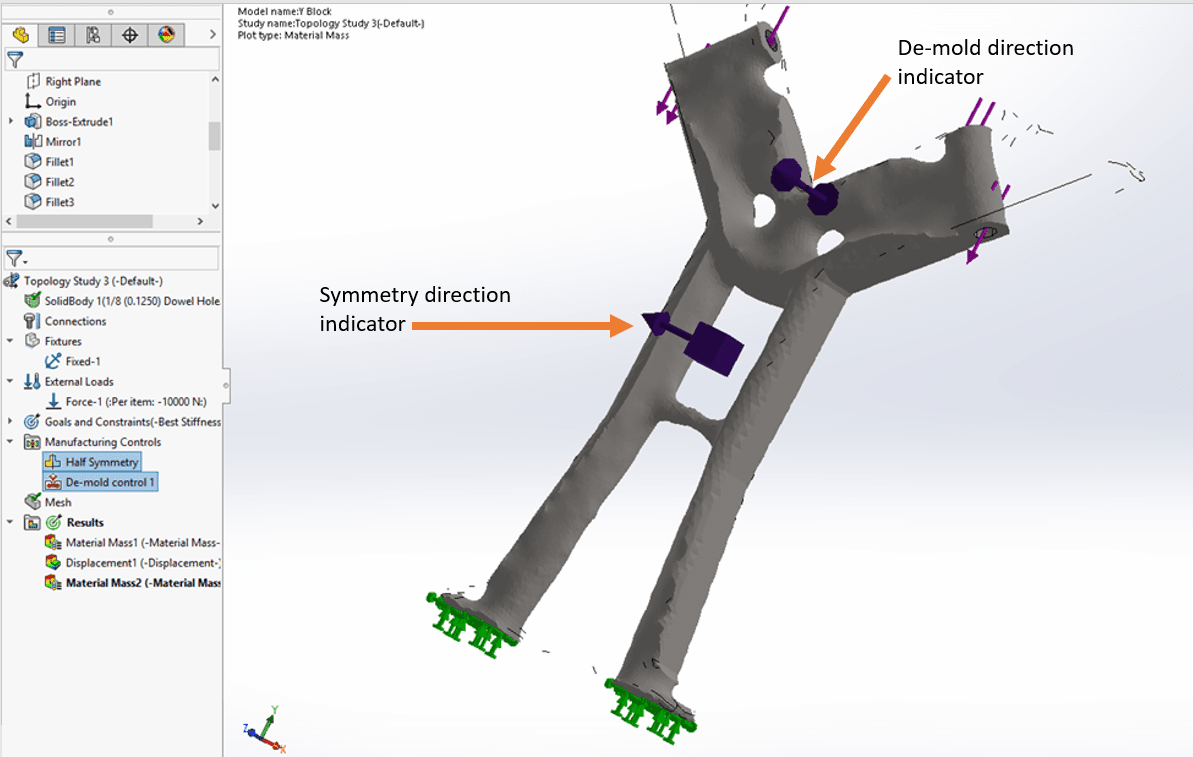 Above: Symmetry and de-mold direction were both used on this “Y” shaped bracket. Symmetry was used to keep the bracket even about the “Y” and De-Mold was used in the thickness direction of the part.

The above screenshot shows a member that has a very small mesh which can result in very thin structures in the part. Instead of simply increasing the size of the mesh, adding a thickness control could drive the results towards fewer members with a higher thickness.

Topology studies are a fantastic way to make use of SIMULATION to help drive parts to their minimum mass state; and let’s be honest, they look really cool. As the additive and other advanced manufacturing fields grow, shapes like this will become more common. With a bit of practice and imagination, topology studies in SOLIDWORKS Simulation Professional can help you become the engineer of the future.