Lynx Motorsports is a student engineering team from University of Colorado Denver that designs and races Formula race cars as a part of Formula SAE (Society of Automotive Engineers).

Each year, Lynx Motorsports designs, builds, and tests a prototype to be judged against their peers in engineering across the US. They will compete in the Formula SAE Lincoln race and design competition in Lincoln, Neb. June 20–23.

We spoke to students Robert Wiley, Wesley Kaiser, and Slade Mills about their progress in preparing for this week’s competition.

“It’s pretty much a rite of passage. We start our design process in August and go from 3D models, run calculations and stress analysis in SOLIDWORKS FEA, and then, come springtime, we actually manufacture the parts.”

At CU Denver, it’s part of the senior design class to design a car and compete on the team in order to graduate. “It’s pretty much a rite of passage,” says Robert Wiley. “We start our design process in August and go from 3D models, run calculations and stress analysis in SOLIDWORKS FEA, and then, come springtime, we actually manufacture the parts.” The team’s car performed well in last year’s competition, earning them a spot in the top 40; it was also the first year since the team’s formation in 2014 that they competed in all the dynamic events. 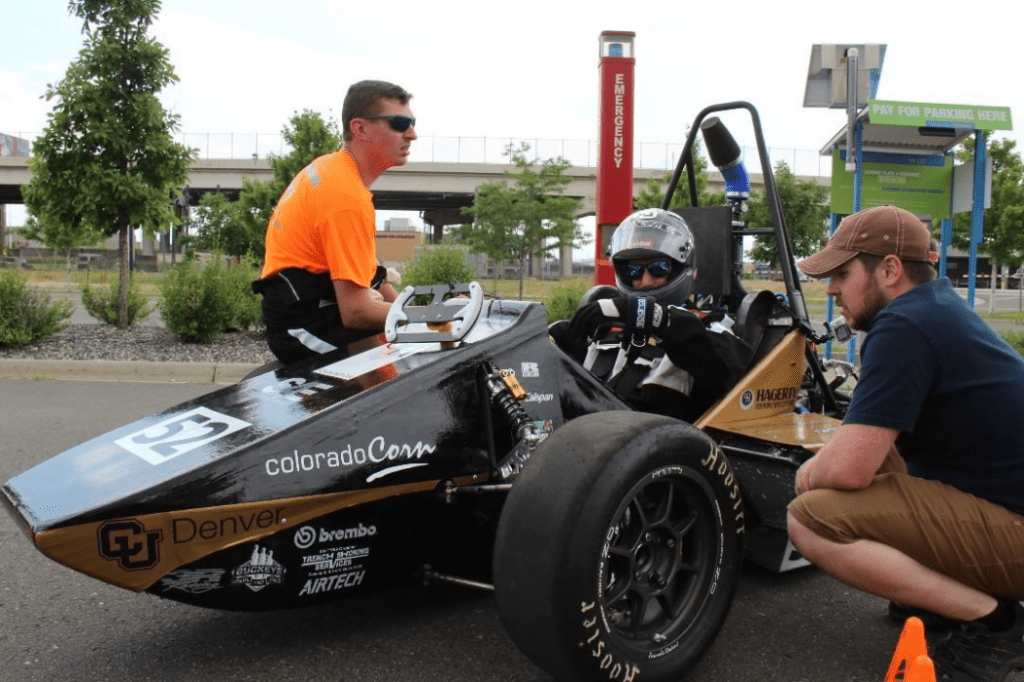 This year, however, they’re ready to break the top 20 with a few upgrades on the electrical side, including a CAN [Controller Area Network] bus center unit. “We have a sensor that constantly monitors the air-fuel mixture at the exhaust, and then it continuously adjusts the fuel-air mixture going into the combustion chamber,” says Slade Mills. “It’s called closed-loop fuel injection. It ensures we’re burning fuel at the most efficient level and can create the most power.” The other shift in this year’s model is in shifting, this time controlling it through the ECU [Engine Control Unit]. “We’re using a paddle shifter that’s mounted on the steering wheel,” Slade explains. “When the driver shifts gears, a signal is sent to the ECU, and the ECU says, ‘cut ignition, cut fuel,’ then, ‘shift gears,’ and when the gear shifts, it sends another signal that says ‘turn on ignition and fuel,’ and the gear shift’s complete, all in about 60 milliseconds.”

As for the physical upgrades, one particular weak spot they were hoping to improve was the air intake system. The team’s air intake system completely failed during competition in 2017. They were able to determine the cause of last year’s flaw through Flow Simulation. Some flow tests showed that the overall design had a low fatigue lifecycle, and in some stress tests, there were some weak points along the external faces. “The flow simulation was actually pretty horrible on last year’s model,” says Slade. “We improved that quite a bit this year!” The air intake system on last year’s model lasted about 10 hours before failing, but the team was able to repair it to keep it running another five hours. “We ran it the entire competition, and the car finished,” Wesley Kaiser says, “but that part was not a strong point of the design.” This year’s improvements include adding a waffle-pattern feature on the external face to increase the overall strength, making some places thicker in material, decreasing the size by 85 percent, and building better internal supports. “We’re pretty confident this year that it’s going to work out much better for us,” Slade says. When working with CATI as a sponsor, the Lynx team wanted to take advantage of additive manufacturing on their design to create the air intake filter. Working with Manufacturing Solutions Applications Engineer Tim Crennen from CATI, the team was able to custom-print an ASA plastic part on a Stratasys 450 3D printer that would be used on the vehicle.

Lynx has been putting finishing touches on their car and practicing lap-times in the past two months. They have been doing time trials at about 65 mph on autocross-style courses—about the only place they can practice in the area—but on race day, they’ll be able to get much faster with the longer straightaways on the course. At this event, teams earn points not only for speed but in multiple static events that judge their engineering prowess. A majority of the Lynx team graduated in May from CU Denver, and are going on to pursue careers in automotive, aerospace, and electrical engineering.

“Our team motto is there is not many problems we can’t overcome with hard work and ingenuity,” says Slade, something that is apparent upon speaking to the team. We wish Lynx Motorsports well in the Formula SAE Lincoln competition! You can follow their team’s progress at @lynxmotorsports or visit them online at lynxmotorsports.org. 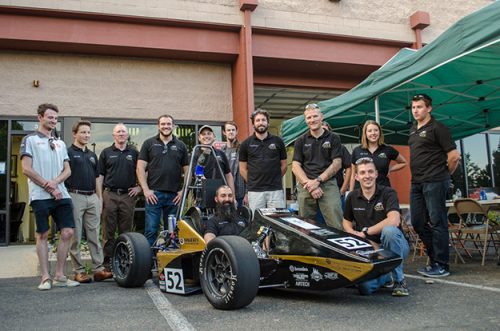