An agile white vehicle roams the Arizona desert, maneuvering the unforgiving terrain as the wind and sun beat down and temperatures swing from one extreme to another. NASA astronauts and engineers are test-driving a rover over rocks and sand, up and down hills in an environment that simulates the brutal conditions of Mars. 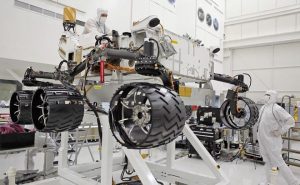 An agile white vehicle roams the Arizona desert, maneuvering the unforgiving terrain as the wind and sun beat down and temperatures swing from one extreme to another. NASA astronauts and engineers are test-driving a rover over rocks and sand, up and down hills in an environment that simulates the brutal conditions of Mars.

This is Desert RATS (Research and Technology Studies), and the rover — about the size of a Hummer and boasting a pressurized cabin to support humans in space — is being put to the test. It could ultimately serve one of NASA’s loftiest goals: human exploration of Mars. In the nearer future, similar vehicles might help humans investigate near-earth asteroids.

The rover is integral to NASA’s mission to extend human reach farther into space. Its cabin can accommodate a pair of astronauts for days as they study extraterrestrial surfaces. Its twelve rugged wheels on six axles grapple over irregular, unsure terrain. And its forward-jutting cockpit can tilt down to place its observation bubble low to the ground.

To design such a tenacious and specialized vehicle, NASA engineers drew on ingenuity and advanced technology. For example, about 70 of the parts that make up the rover were built digitally, directly from computer designs, in the heated chamber of a production-grade Stratasys 3D Printer. The process, called Fused Deposition Modeling (FDM) Technology or additive manufacturing, creates complex shapes durable enough for Martian terrain.

When you’re building a handful of highly customized vehicles and subjecting them to otherworldly punishment, stock parts and traditional manufacturing methods aren’t enough. 3D-printed parts on NASA’s rover include flame-retardant vents and housings, camera mounts, large pod doors, a large part that functions as a front bumper, and many custom fixtures. FDM offers the design flexibility and quick turnaround to build tailored housings for complex electronic assemblies. For example, one ear-shaped exterior housing is deep and contorted, and would be impossible — or at least prohibitively expensive — to machine.

For its 3D-printed parts, NASA uses ABS, PCABS and polycarbonate materials. FDM, patented by Stratasys, is the only 3D-printing method that supports production-grade thermoplastics, which are lightweight but durable enough for rugged end-use parts.

Failure is Not an Option

“You always want it to be as light as possible, but you also want it to be strong enough that it’s got your safety factors, that nobody’s going to get hurt,” NASA test engineer Chris Chapman says. NASA’s mantra regarding human space travel is: Failure is not an option. The journey to space subjects a vehicle to intense stresses, starting with the launch from Earth. “You’re going at several thousand miles per hour just to escape the Earth’s atmosphere. So you’ve got to be able to handle all these vibrations just to get out into space, and the vehicle can’t be damaged,” Chapman says.

NASA engineers also 3D print prototypes to test form, fit and function of parts they’ll eventually build in other materials. This ensures machined parts are based on the best possible design by solving challenges before committing to expensive tooling. “Everyone’s got a budget to deal with, and we’re no different,” says Chapman.

Every day, NASA engineers and their devices bridge the gap between practical concerns such as budget and manufacturability, and the human drive to discover the secrets of unfamiliar worlds — in the workshop, in the desert, and eventually on another planet.