The moment Megan Lavelle saw the device, she knew it would change her daughter’s life.

The moment Megan Lavelle saw the device, she knew it would change her daughter’s life. Lavelle is an energetic, unstoppable mom whose youngest daughter, Emma, was born with arthrogryposis multiplex congenita (AMC). At a Philadelphia conference for AMC families, Lavelle learned about the Wilmington Robotic Exoskeleton (WREX), an assistive device made of hinged metal bars and resistance bands. It enables kids with underdeveloped arms to play, feed themselves and hug. 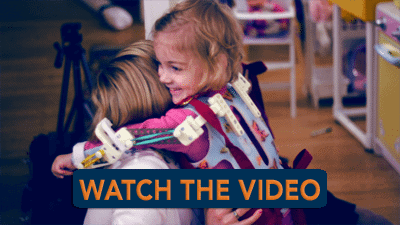 AMC is a non-progressive condition that causes stiff joints and very underdeveloped muscles. Emma was born with her legs folded up by her ears, her shoulders turned in. “She could only move her thumb,” says Lavelle. Doctors immediately performed surgery and casted Emma’s legs. The baby girl went home with parents determined to provide the best care.

Medical experts warned that AMC would prevent Emma from ever experiencing any sort of normalcy. She developed more slowly than an average child and spent much of her first two years in casts or undergoing surgery. Unable to see Emma play and interact with her environment in ways her older daughter had, Lavelle privately wondered whether Emma’s cognitive ability would be hampered as well.

But Emma progressed, slow and steady. As she grew and became able to move about with the help of a walker, it became clear that her mind was sharp and her determination on par with her mom’s. At two years old, she still couldn’t lift her arms, and the smart little girl wanted more. “She would get really frustrated when she couldn’t play with things like blocks,” Lavelle says. And so the mom would be Emma’s arms for her; playing with blocks, eating, brushing teeth.

Then came the WREX, demonstrated at the conference by an 8-year-old AMC patient lifting his arms and moving them in all directions. Lavelle met with the presenters, Tariq Rahman, Ph.D, head of pediatric engineering and research, and Whitney Sample, research designer, both from Nemours/Alfred I. duPont Hospital for Children in Wilmington, Delaware. Rahman and Sample had worked for years to make the device progressively smaller, serving younger and younger patients. Attached to a wheelchair, the WREX worked for kids as young as six. But Emma was two, small for her age, and free to walk.

In Sample’s tool-and-toy filled workshop, the team strapped Emma’s little arms into a small but awkward trial WREX attached to a stationary support. “She just started throwing her hands around and playing,” Sample says. Megan brought Emma candy and toys and watched her lift her arms toward her mouth for the first time.

For Emma to wear the WREX outside the workshop, Rahman and Sample needed to scale it down in size and weight. The parts would be too small and detailed for the workshop’s CNC system to fabricate. But humming along near Sample’s desk was a Stratasys 3D Printer, which can build complex objects automatically from computer designs — like an inkjet printer but in three dimensions. Sample often used it to work out ideas with physical models, so he 3D printed a prototype WREX in ABS plastic. The difference in weight allowed Sample to attach the Emma-sized WREX to a little plastic vest.

The 3D-printed WREX turned out to be durable enough for everyday use. Emma wears it at home, at preschool, and during occupational therapy. And the design flexibility of 3D printing lets Sample continually improve upon the assistive device, working out ideas in CAD and building them the same day.

Fifteen kids now use custom 3D-printed WREX devices. For these littlest patients, Rahman explains, the benefits may extend beyond the obvious. Prolonged disuse of the arms can sometimes condition children to limited development, affecting cognitive and emotional growth. Doctors and therapists are watching Emma closely for the benefits of earlier arm use.

Emma quickly grew to love the abilities WREX unlocked in her. “When she started to express herself, we would go upstairs [to Sample’s workshop] and we would say, ‘Emma, you know we’re going to put the WREX on.’ And she called them her magic arms,” Lavelle says.

The little girl’s approval is a fitting reward for her determined mom and dedicated researchers. Sample says: “To be a part of that little special moment for someone else, can’t help but tug at your heart strings.”

Learn more about Nemours/Alfred I. duPont Hospital for Children, where the WREX was developed, at Nemours.org.