A new final design rarely is achieved in a first go. It often takes some jumping around, some changes to get to that final result. An assembly feature tree in SOLIDWORKS may end up with items listed in a "random / as developed" order. Later one might prefer to have the items listed in a different logic sense.

It a part Feature Manager Tree we know we can reorder features by simply dragging and dropping them up or down the part feature tree. Now there are issues, some order changes can have dramic positive or negative results and some attempts to reorder just don't work at first because of parent child relationships between the features.

The assembly Feature Manager Tree is similar but also another "level" of control. You can actually restructure the hierarchy of you assembly with the same drag and drop. That's really nice if thats what you wanted. It's really not so nice when you don't want to change the assembly hierarchy.

So how then does this work? The best thing to do when reordering any item in an assembly Feature Manager Tree is to hold down the Alt key before-during and until the drag and drop has completed. The result will be a simple reorder rather than a restructure of the hierarchy. 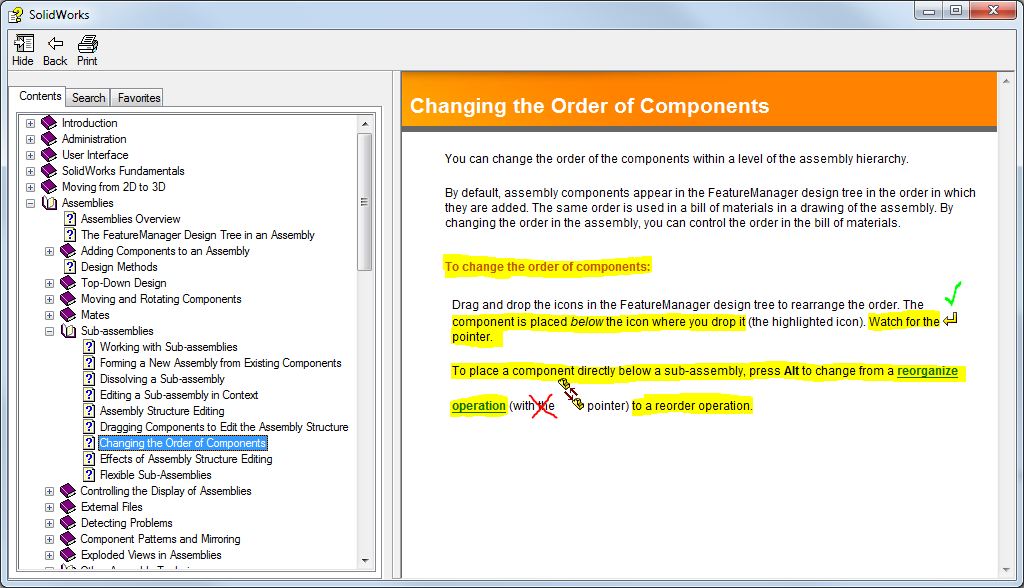 Note: The Alt key isn't always required, but even when it's not it still works. Where it really is necessary is; if your asm only has sub assemblies. Without the Alt key being used, dragging and dropping will always try to change the hierarchy. Trying to put a part between two subassemblies, will also not work without the Alt key. Again, it'll just try to rearrange the part "into" the subassembly rather than reorder. Trying to put an item after a subassembly will again default to changing the hierarchy rather than reorder.

Using the Costing Tool in SolidWorks