March Madness and the Charity Stripe

It’s that time of year again when office productivity goes down.  Way down.  No, it’s not because of Spring Fever.  At least not yet!  We have brackets to check.  We have to stand over the cubicle wall and brag about correctly picking a 15-2 upset.  We have to make fun of our coworkers who always pick chalk.  Most importantly, we have to figure out how to stream basketball games in web browsers!  Yes, it’s time for March Madness!

While we are all getting ready to watch the NCAA basketball tournament, I’d like to address one of the things that can – and often does – make the difference between surviving and advancing or going home.  It’s the free throw.  Some even call it the charity stripe, but I’ll show you using SOLIDWORKS Motion Simulation that it’s not exactly a charitable event.

Success at shooting a free throw requires skill and a significant amount of consistency.  There are a number of variables that affect the success or failure of this fifteen foot shot.  A player has to control launch angle both horizontally and vertically, initial velocity, and also backspin and sidespin of the basketball at release.  One thing that is outside of the players control is how stiff or soft the rims are, which affects how a player perceives a friendly or not so friendly bounce when the basketball hits the iron.  Using SOLIDWORKS Motion, I can control each of these factors in my analysis.  Here is how this is accomplished.

In SOLIDWORKS I have a basketball modeled to the size and weight specifications of a men’s collegiate basketball: maximum circumference of 30”, a weight of approximately 22 ounces, and seams no wider than ¼”.  I also have half a basketball court modeled including the goal post, backboard and rim.  I added the decals for my alma mater, The University of Louisville, and my favorite NCAA basketball team, the Louisville Cardinals! 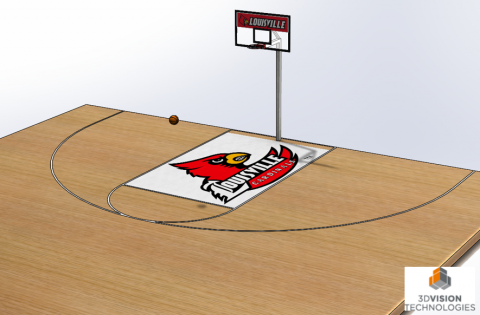 The starting position of the basketball is seven feet high above the court and fifteen feet away from the backboard.  This is the approximate position that one of my favorite players on this years’ Louisville team, Damion Lee, releases the basketball.  In Motion, I am keeping the launch angle set to 55 degrees from horizontal.  I’ll specify initial velocity of 280 inches per second and backspin of 100 RPM for the basketball.  I can also add sidespin to the basketball if the players hand at release isn’t in the correct position.  Finally, I can change how many degrees offline from the center of the rim that the shot trajectory is at release.

In SOLIDWORKS Motion, the setup requires specifying each of the prior listed variables.  There is 3D contact between the basketball and the court/backboard/rim with appropriate impact properties, gravity, and the initial velocity and backspin condition.  There is also a rotary motor to include sidespin in the analysis. 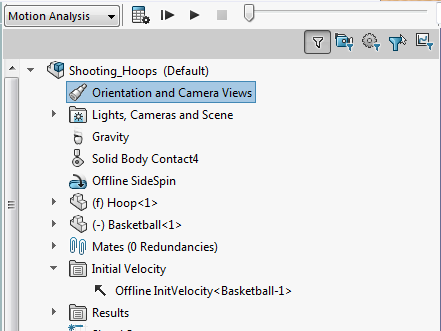 When I am confident the Motion Study setup will solve correctly, I created a Design Study using parameters that were linked to Motion variables.  For the Design Studies, I varied the initial velocity, sidespin and angle offline at release so I could determine when a free throw is made or missed.  A made shot had to meet criteria defined using a sensor between the center of mass of the basketball and the center of the rim – anything less than the radius of the basketball is counted as a made free throw.

Let’s review the results of the several different studies that were calculated.  In the best case scenario, which is perfectly online, backspin but no sidespin, a free throw is made in seventeen of the thirty-one scenarios, i.e. initial velocity between 280 in/s and 310 in/s, that were calculated.  Looking at the data in the ‘Aligned’ column, the upper grouping of made shots made (in green) are close to being a ‘swish’ while the lower grouping of made shots are from using the backboard (you better have called bank!). 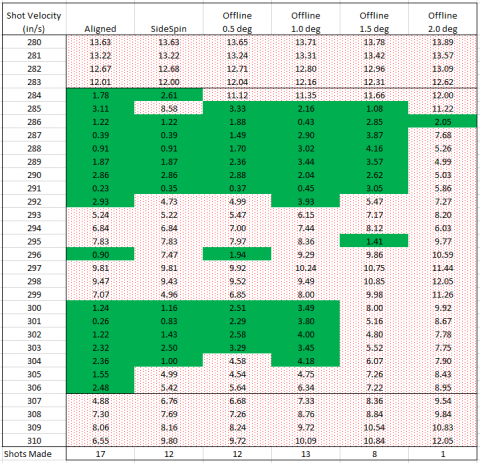 So a player has to release the ball with an initial velocity between 284 and 306 in/sec to have a chance at making a free throw if everything else is perfect.  Then 17 of 23 scenarios (initial velocity) would result in a made free throw.  If the ball is released with 20 RPM sidespin but perfectly online, the number of made free throws decreases to 12 in 23 scenarios.  The four additional columns for ‘Offline’ included sidespin in the analysis with the initial trajectory angled towards the left side of the basketball hoop.  As you can see by looking at the number of cells highlighted in green, the less consistent the shot is in terms of offline with sidespin, the lower the chance of the free throw being made.

There is one thing that I do need to note regarding the results.  Occasionally the sensor would register a made free throw when the shot was not made.  In this case, the center of the basketball was within the 4.5” radius requirement, but the ball bounced out of the rim after impact.  This is what a ‘false positive’ made shot looks like. 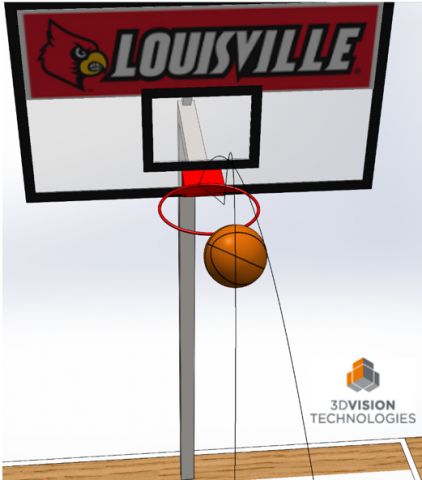 I did filter these false positive results from my final data.  The next time I solve this problem using SOLIDWORKS Motion I will add another sensor under the rim to count made free throws with more accuracy.

In reviewing the made shots, there are a couple things that stand out.  First, more free throws are made when the player attempts to swish the free throw.  This, of course, makes sense as the sidespin will have less of an impact on the shot if the ball does not impact the backboard.  Second, the initial velocity range with the most margin for error is between 286 and 291 in/sec.  All of the free throws are made unless the shot is offline by more than 1.5 degrees.  Think about the skill involved in shooting a free throw within a 5 in/sec velocity range, being off target no more than 1.5 degrees, assuming the launch angle is exactly 55 degrees!

Let’s take a look at statistics for NCAA Division 1 Men’s Basketball players shooting free throws this past season (2015-2016).  There are only four players that ended the regular season with a free throw percentage above 90% and fifty-three that finished at higher than 85%.  There are 347 NCAA Division 1 basketball teams and with usually 13 players per team, this equates to approximately 4500 players.  The 53 best free throw shooters are in the top 1.2% of the class!  Kudos to you men who are models of consistency at shooting free throws.  Now that you know how difficult it is to make a free throw, if you can explain why it is called the Charity Stripe, I’m willing to listen.  Enjoy March Madness!  Now go make your products better with SOLIDWORKS Simulation!

And to the Univerisity of Louisville Cardinals… I’ve got your back!

What does support mean to your organization?