It’s been nearly five years since I wrote the “Convert Durometer to Young’s Modulus” blog.  I mention this as even today that blog article is still regularly visited by people looking for workarounds to analyze rubber materials with linear finite element analysis solvers.  While I wrote a disclaimer stating that there is not a direct correlation between Shore durometer and Elastic Modulus, I am long overdue to compare the workaround to the correct method for analyzing flexible, stretchy materials.

Using the SOLIDWORKS Materials Web Portal, I found several rubber materials with different Shore durometers listed.  I downloaded Viton 75 and Santoprene 55 as both of these materials included the necessary stress-stretch curves for utilzing a Nonlinear Hyperelastic material model.  Referencing the spreadsheet and equations I used in the blog article from several years ago, a 55 Shore-A durometer material calculates to an Elastic Modulus of 1.92 MPa.  Similarly, a 75 Shore-A durometer material calculates an Elastic Modulus of 3.072 MPa.  These two values will be used for calculating the Linear Static studies while the Mooney-Rivlin material test data will be used for the Nonlinear Hyperelastic studies. 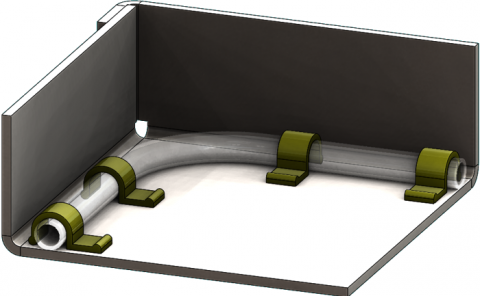 The example model I created is a portion of an enclosure where rubber tubing is routed along the inside edges and secured with tube clips.  For the Finite Element Model, I used a shell mesh for the tubing and excluded the other components to simplify the analysis. In place of the tube clips, I used an ‘On Cylindrical Face’ restraint at the clip locations to restrict radial growth of the tubing.  At the ends of the tubing, I specified a Reference Geometry restraint to prevent the tubing from translating axially.  Then I added internal pressure to the tubing starting at 0.1 psi.  I utilized a Design Study to vary the pressure from 0.1 psi to 10.0 psi and tabulate the results for those multiple pressure loads. 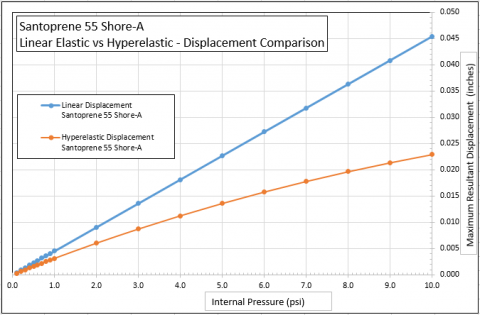 The maximum Von Mises Stress results for Santoprene varied from -3.7% to +13%. 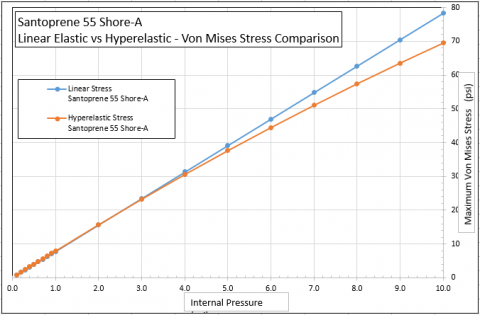 Similarly for the two analyses comparing Viton, the Linear Elastic material model underestimated stress between 145% and 198%. 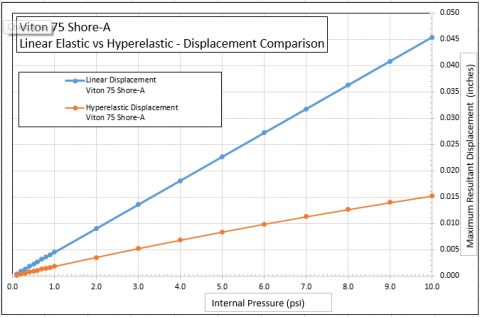 The difference in calculated maximum Von Mises Stress ranged from -7.2% to +1.4%. 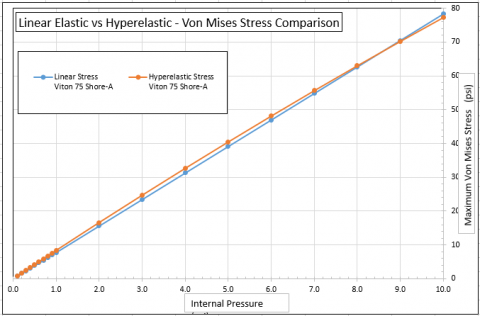 The least difference between the Linear Static and Nonlinear Hyperelastic occurred at the lowest pressure load of 0.1 psi, as expected.  The bottom line for analyzing rubber and similar stretchy materials is have a clear understanding of the assumptions you make.  If you’re going to analyze a hyperelastic material as linear elastic, be certain to acknowledge that this is only valid for very minimal loading conditions.  As long as you clearly identify your assumptions and use appropriate loading conditions, your initial linear static study with a hyperelastic material will get you started on an analysis path.  Just be sure to use the appropriate analysis type and material model for hyperelastics for the most accurate results for your final analysis.  Now go make your products better with SOLIDWORKS Simulation!

SOLIDWORKS Simulation: What’s so Great About Event Based Motion?