If you have ever been to a SOLIDWORKS World conference, you know that one of the big attractions every year since 2000 has been the Model Mania Contest.  This gives all you engineers’ a chance to show off your SOLIDWORKS skills and compete in a design challenge where both time and accuracy are paramount.

Here at CATI, we also host a Model Mania contest every year at our Design Innovation Summit that highlights all the new features in SOLIDWORKS.  This year the model we used was from SOLIDWORKS World 2011.  Each contestant gets 20 minutes from start to finish.  You first model a part from a given drawing.  After modeling the first phase, you are then given a second drawing with some changes.  This mimics the reality of design, in that changes occur, with the goal of getting it done as fast and accurate as possible.

This year, I manned our Model Mania booth and had several contestants comment that “this part is harder than it looks!” and, “what is the best way to model this part?” and, “How would you have done these changes?” If you would like to see how I model this part, watch the video linked here – (12min).  How long did it take you to model the part?  Let us know in the comments below.  Keep in mind that there are multiple ways this part could be modeled.

The part we used this year was a Pipe Connector as shown below. 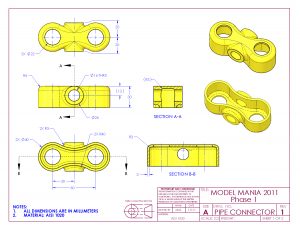 This is the second phase of the contest.  Here you need to modify the model, and run the simulation as shown. 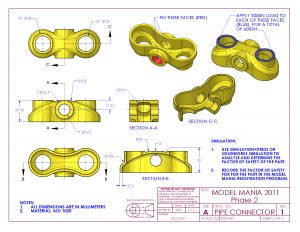 3D Printing a Giant Wrench With the Objet Connex500

Harnessing the power of topology studies in SOLIDWORKS Simulation: Part 1