What is the difference between torque and moment of force? Depending on who you talk to, you will get different and confusing answers. The truth is that moment of force (often known simply as moment) and torque are equivalent. Not so in SOLIDWORKS Simulation, though. We will investigate the differences between the two.

I encountered a small issue with torque loads in simulation and after inspecting the help file, I was still confused. I spent some time to clear up this issue and hopefully you will find this information useful.

The issue that started this quest for understanding was when a torque load applied to a joint did not create the expected magnitude of stress on the beam. A review of the help file found that a torque in SOLIDWORKS can only be applied to faces. Yet the torque feature manage allows users to apply torques to faces, edges, vertices, joints, and beams (see pic below). There was only one way to know for sure; this phenomenon had to be tested.

I needed to apply a torque, a moment, and a direct transfer load to each time of element in SOLIDWORKS. I created a part model with a nine cantilever beams. Some of these beams were meshed solid, some were meshed as shells, and the remaining were meshed as beams. Now that I had every SOLIDWORKS element type (for stress analysis, at least) I applied a torque, a moment, and a direct transfer moment to each of the 3 element types. The results were conclusive. As you may know for mixed mesh studies, SOLIDWORKS will either show stresses on beams or shells/solids, but not both beams and solids/shells at the same time; I had to create 2 stress plots. 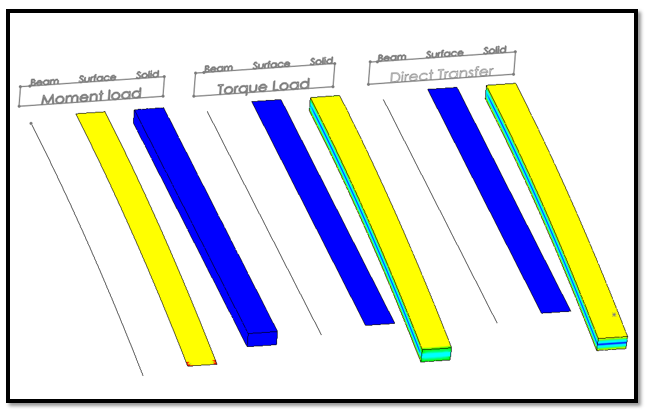 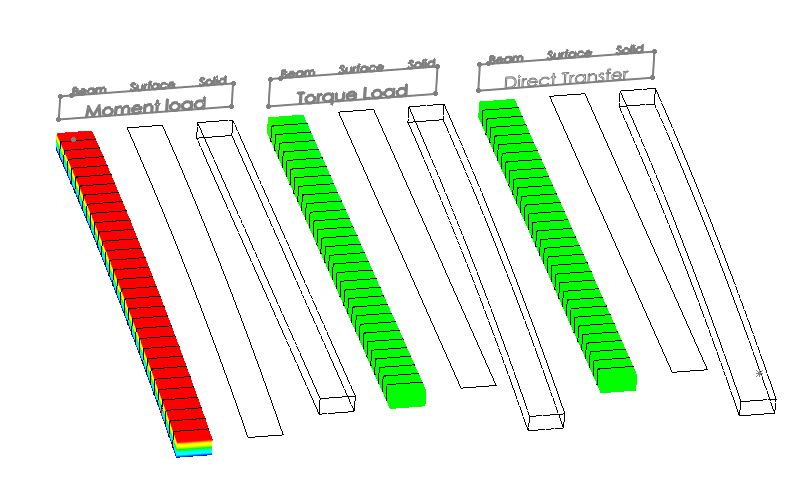 Looking at the beam stress plot we see that only a moment load is accepted for a beam element.

In conclusion, we must use a moment load for both beam elements and shell elements, and we must use either a torque load or direct transfer for solid elements.