The heck with the groundhog and his weather prediction!  The NFL season recently ended in spectacular fashion and spring is right around the corner.  And spring means baseball!  With hardball season fast approaching, now is a good time to clear up the mystery of defining orthotropic material properties in SOLIDWORKS Simulation.  Why?  Well, you might want to solve a few Finite Element Analysis studies with baseball bats and if your material properties aren’t set up properly the results will be invalid. 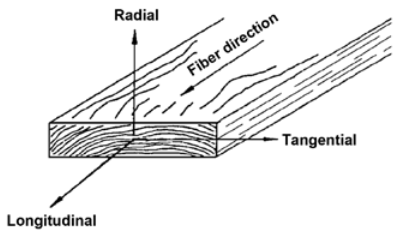 Let’s consider a square profile cantilever beam that is 10 mm wide and 100 mm in length.  I’m making the Front plane and a reference coordinate system visible in the picture.  I will use these two types of reference geometry to demonstrate how an orthotropic material can be defined for analysis. 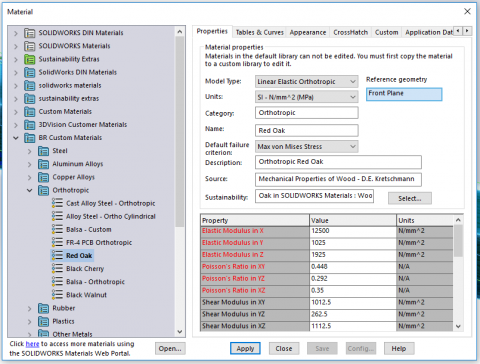 There is a simple rule to follow when using reference planes to define orthotropic materials.  When looking at the positive-normal side of a reference plane, the X-axis is defined from left to right as you read text.  The Y-axis orientation for is from the bottom to the top of the text.  Finally, the Z-axis of the material is out of the screen, perpendicular to the X- and Y-axes (following the right-hand rule), i.e. the positive normal of the Front Plane.  I will verify that this is true using the SOLIDWORKS Simulation Load Case Manager.

In the first Finite Element Model “Load Case Study – Plane” I chose the Front Plane as the reference.  I applied a fixed geometry at the left end of the cantilever beam and three 100N loads on the right end of the beam – a tensile load, a vertical bending load, and a horizontal bending load.  I also set up three sensors to track the maximum displacement in the X, Y, and Z directions for the study.  The results are shown in the picture below. 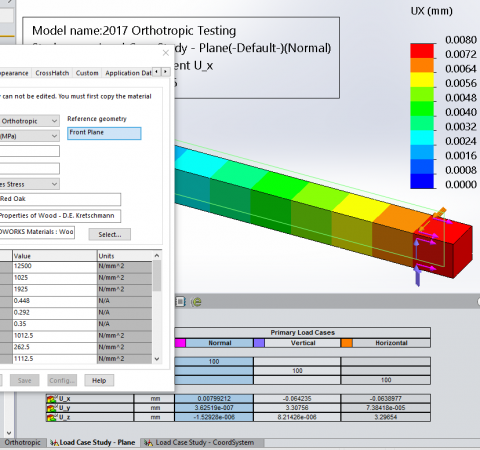 To verify that the simple rule for orthotropic reference planes is correct, I created a coordinate system in the SOLIDWORKS model that matches the global coordinate system of the part.  Then I copied the “Plane” study to a “Coordinate System” study, modified the orthotropic material reference, and re-solved the finite element model, again using the Load Case Manager.  The results for that study are below.  The sensors used to track displacement values are an exact match for results between the two studies. 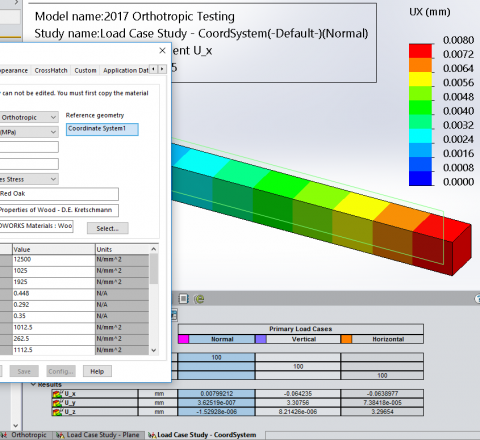 Now that you have a handle on defining orthotropic material orientations in SOLIDWORKS Simulation, you can get to work on your baseball swing.  Even better, maybe now you’ll pay more attention and point the Louisville Slugger logo on your wooden bat towards the sky!  (Yes, there is such a thing as the ‘logo up’ rule.)  Now go make your products better with SOLIDWORKS Simulation!