Here is a screen shot from my SOLIDWORKS PDM Standard data card.

For the material selection, there are actually two controls on top of each other, both pointing to the same “Material” variable. Control logic is used to determine which control the user sees.

First, I add the dropdown that will be used if the user assigns the material type to be “plastic”. (The control has to be a dropdown, you cannot use a droplist.) Connect it to a variable named material. This is the control logic I am using: 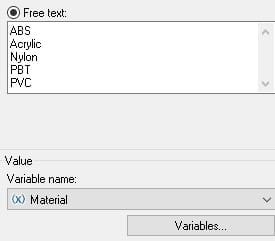 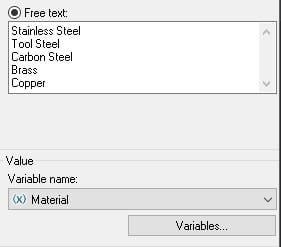 This dropdown will only be visible if the user chooses the material type to be “metal”, otherwise the control will be hidden.

Only one control is visible at a time because of the control logic. Both controls are connected to the same “material” variable, that is why it is important to use a dropdown. If you would have chosen a droplist, the hidden control would not be able to accept a choice not on its list, and that would make it impossible for PDM to store the variable value’s correctly.

This is a rather simple example where we only had two choices for the first category, but does scale up. You simply need to add a dropdown for each category -the control logic is nearly the same. If you find you are doing a lot of these, PDM Pro does this much simpler with dynamically controlled lists. You only need one dropdown/droplist! If you want even more in PDM Pro, PigeonHole is a fantastic tool to use where the logic gets very complex.