Now we reach the crux of the matter. What makes a difference in Graphics performance with SolidWorks? We discussed in our first graphics article (FSWPC-13-#7a) that while some of the graphics related functions were fairly inert other made a significant impact, either positive or negative, but these effects were fairly consistent across the spectrum of graphics card options. So still we can’t tell much of a difference between a Quadro 600 and a Quadro k5000; that is until we start diving a little deeper.

In our testing we ran three models through our functional test.

The large assembly that we used for all of our testing.

A small or medium sized assembly with roughly 700 components. 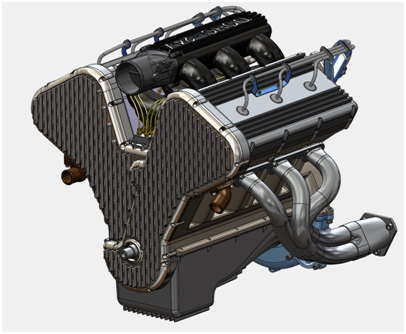 We ran each model set through the exact same benchmark 20 times. Each run isolated a different functional option (ie RealView on or off, display state options, etc…). We then combined the results of each test into a “total runtime” and began comparing results relating different model sets and different cards.

The results were somewhat counter intuitive.

The most interesting conclusion that we have come to is that you cannot expect an increase in graphics performance when working with very large assemblies if you buy a more expensive graphics card.

The maximum percentage improvement found with large assemblies was 1.6% between the k5000 and the others which were practically identical. We found this to be very disheartening but continuing the tests showed the positive side.

Small assemblies and parts showed a much greater tendency to improve performance when increasing graphics card power and capability.

The Small Assembly and Part Model showed that improving the graphics card capability can greatly affect the number of frames a card can paint in a given time thus improving the user experience and comfort. Our tests ran as much as 52% faster with the k5000 rather than the Quadro 600. Knowing what we know about graphics performance this potentially means far smoother graphics transitions resulting in a better user experience.

There is a threshold however. If the graphics card is already pushing out 60 frames per second; will you be able to perceive an increase to 100 frames per second? There comes a point that it does matter if the card is going faster if you don’t get to experience the change due to your own natural limitations.

So it comes to a recommendation. What card will work for your needs? What we have found through our testing and through our many years of SOLIDWORKS experience is that the NVIDIA Quadro 2000 is the best card for SOLIDWORKS users. Realizing that going with a higher level card will not help improve the performance of Large Assemblies and the Quadro 2000 allows us to experience the same level of performance as the higher level cards do to the limitations of the human eye.

The last item to consider when choosing a graphics card is to think about the other programs that you are running on your machine and if they can take advantage of the GPU that a higher power graphics card can offer.