At a recent Evansville SOLIDWORKS User Group Meeting, I presented a Hands-On session using SOLIDWORKS Motion Simulation.  One of the exercises was to throw an object off a cliff.  It’s an interesting application for SOLIDWORKS Motion as many of the details for projectile motion can be calculated by hand.  I’m going to show you how I used SOLIDWORKS Motion to verify the hand calculations.  While I need to leave some of the details of that presentation out of this blog, let’s just say that “baby” “all that matters” when the object gets “down to earth”, that portion of the user group meeting generated more than a few laughs.

The problem statement is as follows.

“We are going to throw an object off a 75-meter high cliff with a horizontal velocity of 10.0 meters per second.  The object is 1.75 meters tall, has a mass of 66kg, and will create a 10cm depression in the ground upon impact.  Calculate and verify the following results:

(1) how long does it take for the object to hit the ground [t, seconds],

(2) what is the vertical velocity at impact, [V_v, meters per second],

(3) what is the final velocity magnitude at impact, [V_f, meters per second],

(4) how far away from the edge of the cliff will the object hit the ground, [H_d, meters], and

(5) estimate the force acting on the object at impact, [F_i, Newtons].” 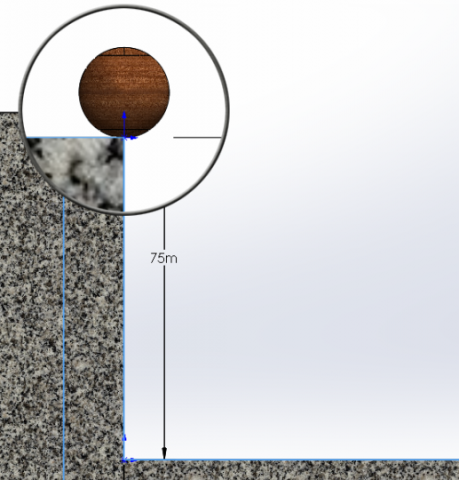 Four of these values can be calculated by hand using equations for projectile motion.  The fifth calculation, impact force, can be estimated using the work-energy principle, which is the change in kinetic energy of an object is equal to the net work done on the object. 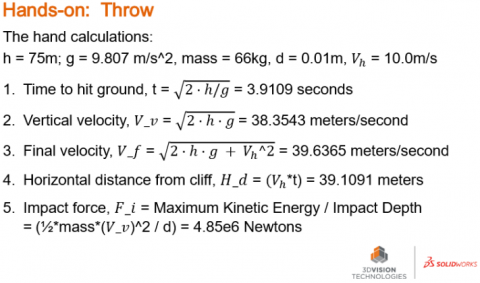 I have already created a 1.75 meter ‘tall’ (diameter) object located at the edge of a 75-meter tall cliff in SOLIDWORKS.  In the SOLIDWORKS Motion study, an initial horizontal velocity is applied to the object.  Gravity also must be included in the Motion analysis.  Knowing the result of the hand calculation for time to hit the ground, I can set the total solution time for the SOLIDWORKS Motion study to less than the default value of 5 seconds.  I solved the Motion study for 4 seconds, though I could have set the solution to milliseconds longer than 3.911 seconds.  There also must be a 3D contact defined in the study between the object and the ground.  The Elastic Properties of the impact are only an estimate, though I can input the specified penetration depth in the Contact Property Manager.  After solving the Motion Analysis, it is time to post-process the results. 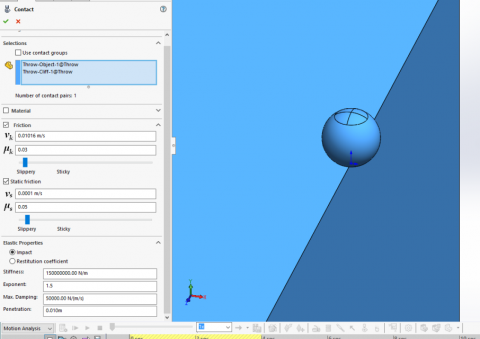 Motion study result plots need to be created to verify the five questions.  Specifically, I will create linear displacement plots for the object in both the x- and y-direction.  I will also create linear velocity plots in the x- and y-direction and a linear velocity magnitude plot.  The last result plot to create is the contact force magnitude between the object and the ground.  I renamed each of the plots for clarity when reviewing the results. 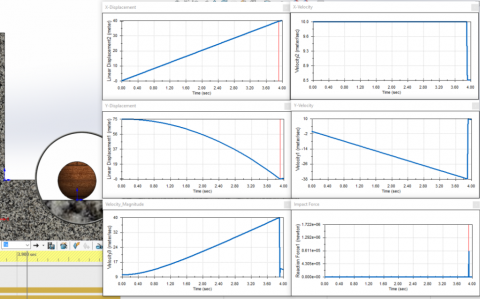 In looking at the plots on the computer screen, it is difficult to determine the exact moment of impact.  I can see where the transition from free fall to impact occurs, but I need more and better data!  The final step in this Motion Analysis is to export the results of each plot to a CSV file so I can review the numbers in Excel. 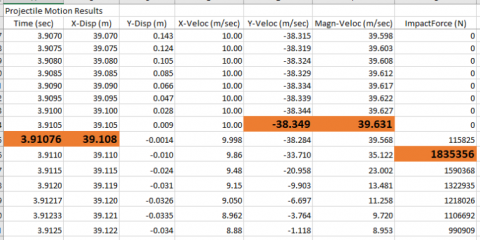 There are a few things to note about the analysis results from SOLIDWORKS Motion.  I am neglecting to account for air resistance as the object falls to the ground.  While the effects of drag could be minimal, it could have been accounted for as a vertical force acting on the object in the opposite direction of gravity.  This drag force could be calculated using SOLIDWORKS Flow Simulation, though I would need an accurate representation of the ‘object’, not a sphere.  And the next time someone asks you about projectile motion, you have two ways to solve it – formulae or SOLIDWORKS Motion.  Now go make your products better with SOLIDWORKS Simulation!