How Do You Get Your FEA Units Consistent?

Unit choice and consistency is a topic that’s very near to a lot of engineers’ hearts.  We tend to have strong opinions about other people’s differing opinions on it, and when we find unit mistakes, they can be some of the most spectacular screw-ups in engineering history.  So how do we avoid embarrassing unit mismatches and surprise dimensional analysis?  With handy reference and clever calculator tools:

Getting Consistent Units: A Helpful Table

Abaqus has no built-in system of units. Therefore, before starting to define any model, we have to decide which system of units will be used. For the analysis results to be accurate or meaningful, all input data must be specified in consistent units. A system is consistent when the derived units (force, stress, energy, power) are correctly expressed in terms of the chosen base units (length, mass, time, temperature). Some common systems of consistent units are shown in the table below (source in manual).

Here are the conversion formulae:

Just Give Me Quick Conversions! 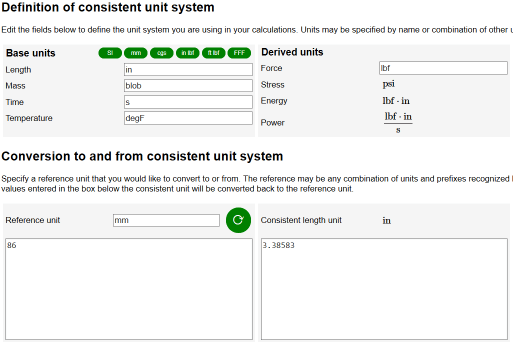 Our technical manager, Carl Osterwisch, has created a very useful FEA unit conversion tool.  It will take your base units of choice (length, mass, time, and temperature) and give you consistent derived units (force, stress, energy, and power).  The calculator will also take units of any system and convert them into your system.  Extremely handy.