Per the SOLIDWORKS 2015 What’s New documentation, the FFEPlus solver has improvements to connector formulation and contacts.  The new Intel Direct Sparse solver is available for static, thermal, frequency, linear dynamic and nonlinear study types.  Like you, I want to see how these changes affect the solution times for my finite element studies.  Faster solutions are always welcome!

Using SOLIDWORKS Simulation 2014 and 2015 I solved several different study types to compare solver performance.  The benchmark files I used were a combination of SOLIDWORKS Simulation Training files and customer files from technical support cases.  All of these files were originally in SOLIDWORKS 2014 format.  For testing these models in 2015, I used Pack-and-Go to create a version to update.  Once I opened the files in 2015, I forced the model to rebuild then saved them to the 2015 file format.  In Simulation, I updated the components for the FEA study and re-meshed the finite element model.  Finally, after the solution completed, I recorded the solve time for each study type and solver combination using the Solver Messages information.  The results of my testing can be seen in the included picture. 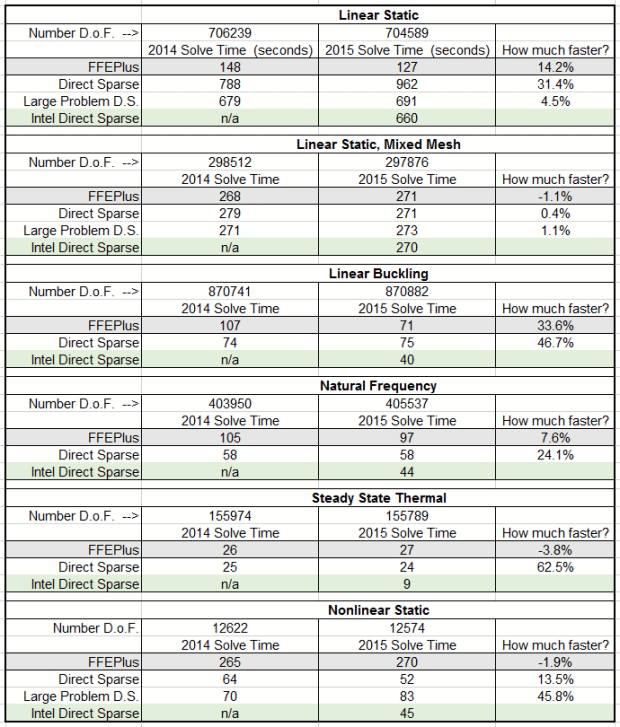 With the majority of our work, what we care about most is getting the job done.  With regards to Finite Element Analysis, this means getting the study to calculate to completion.  If that study can be solved faster by choosing one solver over another, all the better!  For SOLIDWORKS Simulation 2015, I think I’ve identified my default solver of choice – the Intel Direct Sparse solver.  Now go make your products better – faster – with SOLIDWORKS Simulation!