The summer season is getting kicked into gear and that means several things to baseball junkies. I’m not just talking about baseball, hot dogs, and apple pie either! The College World Series is underway in Omaha. Major League Baseball is in full swing. I get asked ‘does a curve ball really curve’. The usual early June fare!

Wait! You didn’t know a curveball does curve on its way to home plate? You thought those pitch trackers showing the flight of the ball were just made for TV? The answer to those two questions are, yes, a curveball does move laterally from the pitcher’s hand to home plate and, no, baseball isn’t a reality TV series.  Now I may not be able to convince you that baseball isn’t reality TV, but it is possible to use SOLIDWORKS Flow Simulation and SOLIDWORKS Motion to show that a baseball does move laterally as it flies towards home plate.

If you want to know why a curveball (or most pitches for that matter) move laterally, it is due to the Magnus Effect.  The spin of the ball creates uneven pressure around the ball which makes it move towards the direction of low pressure.  The speed of the pitch, orientation of the spin, and spin rate of the ball affect how the pitch moves.  Curveballs, sliders, and four seam fastballs have been well analyzed.  But when it comes down to a real pitch, give me the big, nasty pitch.  Give me the knuckleball every time!

Why do I think the knuckleball is the greatest pitch?  You might be tempted to look at one of the creators of the knuckleball, Toad Ramsey, who played for the Louisville Colonels, my hometown team, from 130 years ago!  Interesting, but incorrect.  I am a fan of the knuckleball because of Tim Wakefield, one of my favorite players from my favorite MLB team, the Boston Red Sox.  Now a knuckleball doesn’t move like most “normal” pitches.  A knuckleball should float, flutter, and erratically dance its way to home plate.  It does this because, unlike most “normal” pitches, a knuckleball has almost no rotation.  The movement of a knuckleball isn’t due to the Magnus Effect, rather it is due to an asymmetric wake behind the ball as it moves through the air.  The asymmetry is caused by the orientation of the seams slightly changing during the ball flight, changing the forces acting on the baseball.  Let’s look at how to analyze a knuckleball pitch with SOLIDWORKS Simulation tools.

The first thing to do is set up a SOLIDWORKS Flow Simulation project with the SOLIDWORKS CAD model of a baseball as an external, transient flow analysis.  The setup includes a fluid (air) velocity of 65 miles per hour, a real wall condition of 60 RPM for the ball, 0.7 seconds of real time, and goals to track the forces acting on the ball.  The real wall condition of 60 RPM solved for 0.7 seconds will rotate the ball just under one revolution as the pitch moves from the pitcher’s mound to the catcher’s mitt.  The rotation is about an axis tilted 25 degrees from horizontal, the ball rotating with backspin.  For the transient results, I saved the SOLIDWORKS Flow Simulation solution every 0.025 seconds, which will provide 28 data points for the pitch from start to finish.  The data I’m interested in are the goals specified for the project – the drag, lift, and lateral forces acting on the baseball during the pitch.

After the SOLIDWORKS Flow Simulation project has finished solving, I created a Goal Plot of the forces acting on the baseball and then exported the data an Excel file.  I also created a few cut plots to visualize the pressure and velocity of the ball in time.  In this picture, the top portion shows the slight uneven pressure around the baseball at one instance in time, looking at the baseball from the pitcher’s viewpoint.  The bottom portion of the picture shows a side view of the baseball at that same instance in time as it travels towards home plate (to the left). 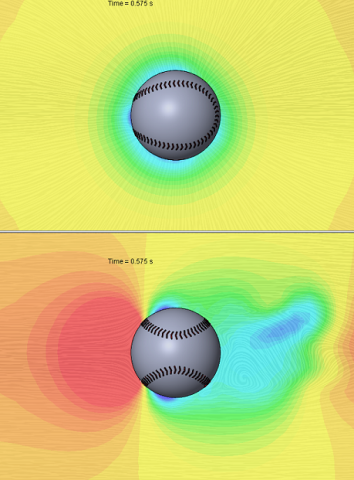 This animation shows how the pressure changes around the baseball during the 0.7 seconds of travel.  Like the bottom of the prior picture, the ball is ‘moving’ right to left towards home plate.

Of course the primary objective of the SOLIDWORKS Flow Simulation project is to collect the drag, lift, and lateral forces acting on the baseball.  That data, from the exported Excel file, will be used in a SOLIDWORKS Motion study to create the actual knuckleball pitch.  Be sure to look for the second half of this blog where I discuss how to take the baseball forces and use those to throw a knuckleball with SOLIDWORKS Motion. While you anxiously await that blog post, if you want to see the Magnus Effect in action, try this video.  Now go make your products better with SOLIDWORKS Simulation!