To read ‘SOLIDWORKS Simulation Tools and the Knuckleball, Part 1’, click THIS LINK.  In the first installment, I explained how I utilized SOLIDWORKS Flow Simulation to calculate and collect the drag, lift, and lateral forces acting on a baseball during a Knuckleball pitch.

After gathering the aerodynamic forces acting on the baseball, I now focus on creating the Knuckleball pitch using SOLIDWORKS Motion.  I created a baseball field in SOLIDWORKS, complete with a pitcher’s mound and rubber, all the bases, including the chalked in batter’s box!  For the SOLIDWORKS Motion study, I only need from the mound to home plate, so when I get to the SOLIDWORKS Motion analysis I will cut down the size of the field. (Why did I create the entire baseball field then?  Who knows… maybe I’ll use it in a future blog about hitting a home run!)

The next step is to create an assembly in SOLIDWORKS for the SOLIDWORKS Motion study.  The assembly needs to include several details to create the pitch.  There are mates to locate the baseball above the pitcher’s mound rubber close to the pitch release point.  I also created a sketch of the strike zone at home plate.  This sketch was used to create an additional reference sketch for the initial direction vector of the pitch, from the origin of the baseball to an aim point above the strike zone.  The initial aim of the pitch is towards the middle of home plate but above the strike zone to account for the vertical movement of the baseball during the pitch.  With all the components set in place, it’s time to “throw” the knuckleball!

I created a SOLIDWORKS Motion study in the assembly and made certain I changed the pull-down from Animation to Motion Analysis.  Then I set up the initial velocity of the pitch by right-clicking on the baseball component from within the SOLIDWORKS Motion study feature tree.  The baseball is assigned an initial linear velocity of 1144 inches per second (65 mph along the pitch aim sketch) and an initial angular velocity of 60 revolutions per minute (about the 25-degree axis that was used in the SOLIDWORKS Flow Simulation project).  Next, I added gravity aligned with the assembly Y-axis so it will correctly affect the ball during the pitch.  The next steps are to bring in the forces acting on the baseball during the duration of the pitch.

Back to the Excel data.  When I exported the goals data to an Excel file there were nearly 6000 lines of data, one line for every iteration of the SOLIDWORKS Flow Simulation project.  While I could have converted it to a CSV file for import into SOLIDWORKS Motion using the Function Builder, I chose to create text files with the solved iteration data every 0.025 seconds.  To my knowledge there is not a limit to the number of data points I can import with the function builder, but using all the saved data points isn’t necessary for my knuckleball.  Prior to creating the SOLIDWORKS Motion study, I made three text files, one each for drag, lift, and lateral force.  These text files will be imported individually when I set up forces acting on the baseball.

Just like a Tim Wakefield knuckleball, correctly setting up the forces acting on the baseball is quite tricky!  After adding a force to the SOLIDWORKS Motion study, I changed the ‘Force Function’ to Data Points which starts the Function Builder dialog.  I selected the interpolation type to be ‘Akima Spline’ and clicked the ‘Import Data’ button to bring in the (text file) data for drag force.  After accepting the input, in the Force/Torque dialog I click on the baseball as the ‘action part’ the force is applied to.  I also need to select a reference direction for the force, a horizontal axis that bisects both home plate and the pitcher’s mound.  Due to the baseball rotation, I also need to specify that the force acts relative to a selected component, a ‘Reference sphere’ that I created and inserted into the assembly. 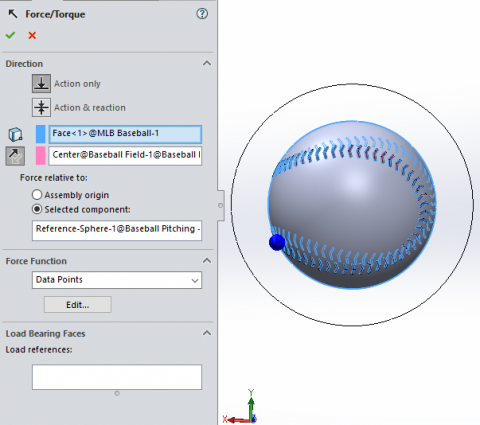 The reference sphere’s origin is mated coincident with the origin at the center of the baseball.  There are three additional mates to keep the alignment of the reference sphere constant, all parallel mates between the reference sphere primary planes and the assembly primary planes.  Without this important step, the orientation of the drag force would change as the ball rotates during the pitch.  I’ll repeat this process to import both the lift and lateral forces also acting on the baseball.  I also added an additional reference sphere to the assembly that will only have the gravitational force acting on it to aid in post processing the results.  The final steps for the SOLIDWORKS Motion study are to change the analysis time to 0.7 seconds and solve the analysis.

If I were to continue my investigation into analyzing the knuckleball, I would make a few changes to the SOLIDWORKS Flow Simulation setup.  Specifically, I would solve Flow projects changing the rotation axis orientation, pitch velocity, and rotational direction of the baseball.  Each project setup would generate a new set of drag, lift, and lateral forces acting on the baseball.  Each of these data sets could then be used in a similar SOLIDWORKS Motion study to determine the movement of the knuckelball.  Eventually I could come up with the perfect knuckleball!  And when I did, I would give Tim Wakefield a call to see if he’s ready to join the Boston Red Sox bullpen for a few relief innings!  Until then, I’ll watch my favorite MLB team from afar and hope a new knuckleballer prodigy gets signed.  Now go make your products better with SOLIDWORKS Simulation!