Classic SOLIDWORKS Colors Are Back

I wonder if Pablo Picasso was referring to SOLIDWORKS when he said “Colors, like features, follow the changes of emotions”?  Based upon the number of technical support phone calls and emails we have received since SOLIDWORKS 2016 was introduced, there is no denying the emotional attachment we users have with our CAD interface!  If you’ve been using SOLIDWORKS long enough, you may recall the uproar over the graphical user interface (GUI) changes from 2007 to 2008, as well.  Then, just like today, the users had plenty to say about SOLIDWORKS!

Let’s focus on the SOLIDWORKS 2016 graphical user interface changes that occurred with the release of SP0.  There were several reasons the GUI was updated for 2016 including support for 4k monitors, remove clutter, and a few much needed bug fixes, etc.  I think those were good reasons for the update.  But it did take me a while to get used to the GUI and find those icons I had become so accustomed to for years.  SOLIDWORKS 2016 SP3 has solved that – we have the option to revert the GUI back to the familiar colorized version we know and love!  Here is how to make those changes in SOLIDWORKS.

As you would expect, the GUI changes are a System Option (Tools… Options… System Options… Colors).  The 2016 SP0 “Icon color”, i.e. interface, is called ‘Default’.  This is what we get with an out-of-box installation of SOLIDWORKS 2016.

To revert your GUI to the 2015 (and prior) version, change the ‘Icon color’ pull-down menu to ‘Classic’ combined with changing your Background to ‘Medium Light’.  The ‘Classic’ GUI will update most of the frequently used icons on the Command Manager to a colorized version.  The ones you’ll notice are for features, surfacing, sheetmetal and similar commonly used commands.  The Classic interface does not update every Command Manager tab, but I think it does enough to appease most users.

This is the 2016 ‘Default’ graphical user interface. 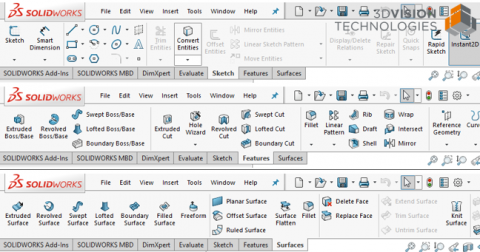 This is the 2016 ‘Classic’ graphical user interface. 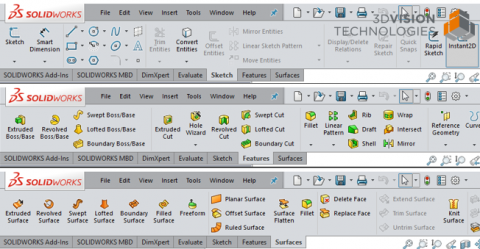 There are a few other subtle changes you will find with the ‘Classic’ interface such as icons for folders, bodies, hidden components and a few others you might notice as you peruse your “new” Classic interface.  While the release of SP3 is still a few weeks away, if you cannot wait, download and install 2016 SP3 EV today.  Then try the Classic interface to verify that it is what you and so many other users wanted.  Now go make your products better with SOLIDWORKS!

SOLIDWORKS: How Does SOLIDWORKS Save Files?

How to show what you want- SOLIDWORKS Assembly Drawing Section