From a 30,000 foot view, Dassault Systemes has an extremely powerful and diverse set of tools to manage and organize data in not just engineering data, but also into other aspects including Change Management or Manufacturing etc.

In this blog article, we will dissect one piece of that and focus in on why users see different connector options in the 3DEXPERIENCE Platform and even more specifically how if you already own SOLIDWORKS the two different options you may be presented with to launch and why you may or may not be seeing them.

There are different Bundles or Packages that Dassault Systemes sells related to SOLIDWORKS CAD, but it boils down to two different icons users may end up with when logging into the 3DEXPERIENCE Web Login when those customers already own or have SOLIDWORKS CAD. There is a 3rd option I will mention at the end of this article but it’s different enough that I will not make it confusing and go into that until the very end of the article.

The two captures below show the two different but Similar Icons, and this blog article will focus on those two variations highlighted in Blue and Yellow respectively and how/why you see those icons to demystify why you are seeing what you do.

If you own SOLIDWORKS and purchased the 3DEXPERIENCE to manage those files, you will ultimately need to have the SOLIDWORKS Connector to communicate between the CAD tool and the 3DEXPERIENCE Platform. There are other connectors to other CAD tools, however that is beyond the scope of this blog.

If you see the SW icon with a BLUE set of rings as shown above, that indicates you have purchased one of the various bundles that INCLUDE the Design with SOLIDWORKS application (or connector).

In my example and screen capture on the left above, if you look under “My Roles” when logged into your web interface, you will see the 3 applications associated with that role: Derived Format Converter, Design with SOLIDWORKS and Render with SOLIDWORKS Visualize.

The presence of the rings themselves indicate that it is a “Connector” and I like to think of the Blue color merely is a way to distinguish that it is part of a larger “Role”, which you can filter through and pick etc.

In comparison, on the right side we also have the rings shown, and again that means it is a “Connector” between the CAD Software and the 3DEXPERIENCE Platform Software, but this would only be visible if you have the Additional Apps enabled under your user profile.

If you are an administrator, then you can go into the Members Management, locate a user who uses SOLIDWORKS and then you may under the “Additional Apps” tab, check the SOLIDWORKS Add-in.

If you DO CHECK that box, then the user will be able to see the “White Ringed” Connector Icon as also highlighted in yellow to be consistent with the above screen capture. 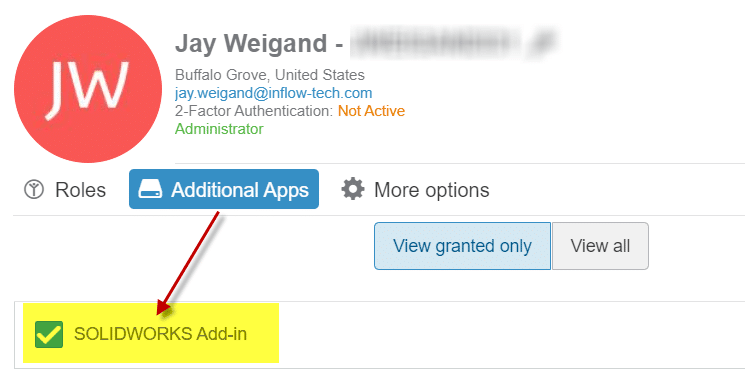 In some cases, depending on how the history of licensing has transpired, you may get into a situation where you show both the Blue Rings AND the White Rings for the connector, and that is because you were granted a role that contains the Blue Style Connector and you also have in your user’s license, under additional apps the SOLIDWORKS Add-in which gets you the White ring style connector.

My general suggestion to the 3DEXPERIENCE Admin, to keep things less confusing with having duplicate Icons, is to not enable under Additional Apps, the SOLIDWORKS Add-in as shown in the above capture, but instead Assign the roles you would normally for the end user, then have that user login to the system and have them check to see if they already have the SOLIDWORKS Connector there with the BLUE rings, if not, then it is OK to enable the checkbox above to share out the White Circle Connector.

TIP: You can search for SOLIDWORKS or even Solid in your apps and quickly filter to show any connectors you may have access to.

Regardless of whether you have BLUE or WHITE ringed Icons, the basics are still all the same.

Here is a quick rundown of how you would install the Connector (blue and white) without getting into specific details.

If you have never used the connector, you pick the DOWN arrow in the icon (blue or white icon has a very similar install), then if you don’t have Java Installed, which is what the connector uses, it will give you a hyperlink to install one of two Java variations, we always use the Adopt Open 64 Bit Java Runtime Link, which is the 2nd hyperlink option, get that installed and then you can continue the install of the connector. Once completed it will want you to reboot your computer which is a very good idea. Once rebooted, then again login to the web side and pick the Down arrow key one more time to make sure you have the latest version of the software. The Down arrow key will check to see if you have the latest version of the software and if so, it will present you with an option to create a Windows Desktop Shortcut. The 1st time you launch the Connector you should always do it from the WEB INTERFACE. The reasoning for this is that 1st launch from the web properly creates all of the files the SW CAD tool needs to function and communicate properly. To best summarize this, after the connector is installed, REBOOT, then login to the web and launch the connector (Blue or White Ringed Icons) from the web side and you will be all good. After you have successfully launched from the web to SOLIDWORKS and have connected to a the Right Collaboration Space (ask your admin if not sure) then you can from that point on just use the Windows shortcut and skip logging into the web interface if you so desire… OK maybe that wasn’t quick but it’s still good info! 😉

The connector uses a Java component and it’s suggested to use the free version, which is the Adopt Open 64 Bit JRE. There was a bug a while back where the install path moved and the connector didn’t like that, but in the later versions of the connector, it is ok to use the latest version of the JRE again instead of an older one, which had an install path that worked that the software could communicate with properly.

Every week or so, I also suggest if you are a cloud customer, to pick the down arrow again on your (blue or white ringed connector) to see if there are any minor releases that may have been released, and if there are, it will give you the option to install to the latest patched version of the connector. Good communication between the engineers/designers and the 3DEXPERIENCE Admin is appreciated here because sometimes in a larger company, they may have a few test users make sure to update to the latest sub version ahead of everyone else to spot check for any bugs or major issues and then if it seems ok, then everyone else can update. In most cases it’s safe to just check with the down arrow and grab and install the latest patched release, which is there to fix bugs that they found on that major version release of the connector software.

The basis of this article is to show that you have two very similar ways to have the connector and depending on how the licensing is granted and roles granted, you may have one or the other “Connector” with blue or white rings.

Beyond the article now is the 3rd variation and I only want to mention it below in case you do have that and are not seeing anything like I’m talking about above, but still purchased SW CAD with the 3DEXPERIENCE.

Dassault Systemes has yet another option to purchase the 3DEXPERIENCE with SOLIDWORKS together called SOLIDWORKS Connected. This variation is geared more to customer who don’t have SW CAD at all and since they are purchasing both SW CAD and the 3DEXPERIENCE. The SW install is wrapped up together with 3D Experience install, which is much different of an approach for installing than what this article deals with, even though it’s end goal is just about the same.

Have a great week! 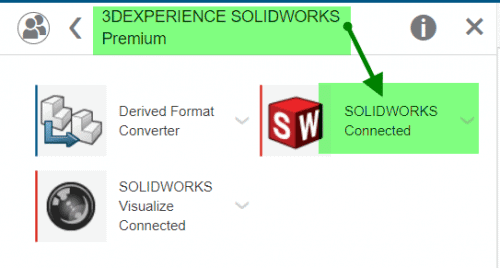