A SOLIDWORKS Certified Mobile Workstation WITHOUT a Discrete GPU? 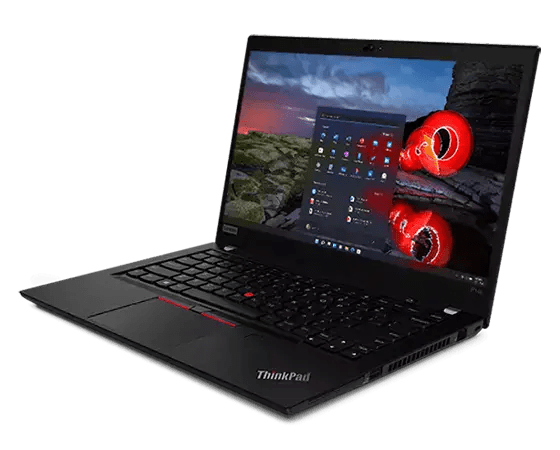 Ultraportable, lightweight laptops are all the rage now. People love to take their web browsing, their video streaming, their office work wherever they go, and a super-thin system allows them to do just that. Intuition would say that such a minimalist laptop comes with less computing capability, but how true is that? In 2022, can you do SOLIDWORKS on a power-efficient laptop with NO discrete GPU? AMD provided CATI with a SOLIDWORKS Certified Lenovo ThinkPad P14s Gen2 so that we could find out.

Until recently, system builders have favored Intel and NVIDIA for the components of their engineering workstations. AMD has made great strides in the last couple of years, and they now boast highly competitive lineup of CPUs and GPUs for SOLIDWORKS users to consider. These additions to the marketplace are what make this particular laptop so interesting to CATI – it is the first all-AMD system we’ve ever felt the need to test with SOLIDWORKS, and we suspect many more will follow in the coming years.

The heart of the Lenovo ThinkPad P14s Gen2 and its light profile is the AMD Ryzen 7 PRO 5850U processor. It’s not just a CPU – it also contains a GPU within the same die, eliminating the chassis space, battery consumption, weight, and cost that a discrete graphics card would demand. The 5850U resides at the high end of this portable, low-power processor line, containing 8 cores/16 threads of AMD’s latest Zen 3 CPU architecture and 8 cores of integrated Radeon graphics. Our ThinkPad is outfitted with 32 GB of DDR4 memory (configurable up to 48 GB), 1 TB PCIe SSD storage, and a 14” anti-glare IPS display panel, at a price point that is comfortably below $2000.

Our first impression was that the laptop is very light, but surprisingly sturdy. It weighs in at 3.24 pounds of fiberglass-reinforced plastic with a magnesium frame that feels exceptional. You don’t have to worry about it taking a swan dive from your hand to the floor, but we don’t recommend trying this. The screen is touch-capable, with about a 45° viewing angle, and its hinges allow it to open a full 180° to lie flush with the keyboard. Speaking of which, the keyboard is, in our opinion, superb for a 14” footprint, though it lacks a numpad.

For those of you who are unfamiliar with CATI, we put great effort into SOLIDWORKS benchmarking, and we regularly give talks on the topic at SOLIDWORKS/3DEXPERIENCE World and throughout the year in CATI and partner webinars. We have been testing hardware for SOLIDWORKS performance for ten years and have developed a custom-built test suite to run standardized, common operations on a variety of real world-representative models. Our data captures true SOLIDWORKS capability far beyond what the built-in SOLIDWORKS benchmarks can do.

Our CATI Standard Benchmark is a battery of tests we can run on several SOLIDWORKS models representing different levels of assembly complexity:

The test operations include opening and saving assemblies, Pack and Go, assembly and part creation, and many other daily operations SOLIDWORKS users perform. This test is typically dependent on the CPU’s single-thread performance. SOLIDWORKS settings can greatly impact the results, so, when we conduct the full battery of tests, we run the CATI Standard Benchmark in 14 settings configurations:

The results of this test are measured in minutes to complete the sequence of operations, meaning lower is better. You can think of it as a relative measure of how much “waiting on SOLIDWORKS” you’ll be doing as you try to get your job done.

To evaluate 3D viewport graphics performance, we have our CATI Standard Graphical Benchmark, which automates on-screen model manipulation and records frames per second. This is a measure of the graphics card’s capability to deliver smooth visual output as you manipulate your 3D model. Using propriety techniques, we perform series of pans, rotates, and zooms on our benchmark models, recording SOLIDWORKS display refreshes over the test duration.

The results of this test are measured in average frames per second. In this case, higher is better (it will look smoother and feel snappier) – but only up to a point. This is because a computer monitor is limited in how many frames per second it can display. This limit is called the monitor’s refresh rate, measured in hertz. If the GPU delivers frames faster than the monitor can refresh the display, the excess frames will be discarded.

For example, if your GPU delivers 200 FPS to a 60 Hz monitor, you will only actually see 60 FPS. Therefore, when interpreting graphical benchmark results, keep in mind that your monitor’s refresh rate (the industry standard is 60 Hz), is the highest performance you can experience.

“High refresh” monitors are becoming more common (they can feel quite a bit more responsive), but you may have to compromise on price, panel size, resolution, or color gamut. It is also important to note that the graphical benchmark results are an average, so it makes sense to seek a little headroom for FPS dips.

For our SOLIDWORKS Simulation benchmark, we apply a 5000 lbf linear static load on a 2,000,000-node model with 6,000,000 degrees of freedom. Results are measured in minutes to complete the analysis. The faster the analysis, the sooner you can get back to work. 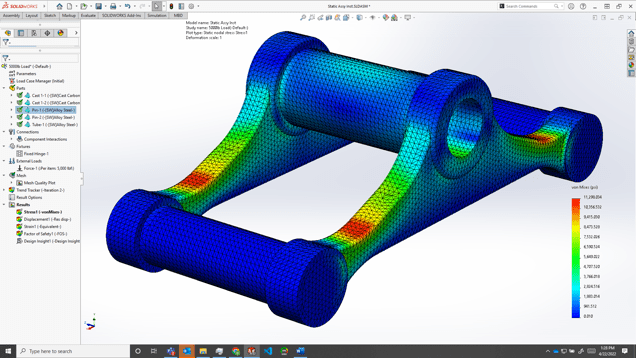 For our SOLIDWORKS Plastics benchmark, we run the fill-cool-warp cycle on a smoke detector’s plastic casing, an official SOLIDWORKS demo model. Results are measured in minutes to complete the analysis. The faster the analysis, the sooner you can get back to work. 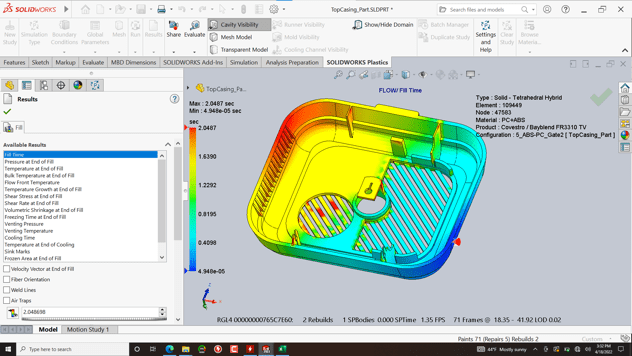 In testing the Lenovo ThinkPad P14s Gen2, we’ve compared it to a range of desktop and laptop systems that represent the kinds of workstations a current SOLIDWORKS user might be familiar with:

For the CATI Standard and Standard Graphical Benchmarks, we focused on model MD01, which has 480 unique and 1509 total components, as we felt this best model matched the intended use case of this machine. We left SOLIDWORKS settings at default, with Large Assembly Mode automatically toggling on, as the test model exceeds 500 components.

For the CATI Standard Benchmark, this laptop is comfortably situated amongst the other SOLIDWORKS workstations. It should provide a familiar quality of CAD experience. Performance in this test is dependent primarily on the CPU, and the 5850U can consistently run at or near it’s 4.4 GHz maximum boost speed. As a result, while the ThinkPad may not win out in most cases, it comes very close, and it does so using a tiny fraction of the desk space and electricity of a desktop or larger laptop.

At 84 FPS, the graphical benchmark results are good, and the system provides a smooth experience. These results were obtained with “Enhanced graphics performance=off”. Typically, we are not concerned with this setting as discrete certified graphic cards have dedicated high-speed video RAM. The 5850U shares system RAM with the video frame buffer, so we need to toggle this setting off to maximize performance for the model size recommended. This does not have any impact on the content or cosmetic effects of the SOLIDWORKS graphical display.

SOLIDWORKS Simulation is an opportunity to test the multithreading capabilities of the CPU. Unlike SOLIDWORKS 3D CAD, SOLIDWORKS Simulation can run many calculations in parallel and see major gains by adding more cores (up to a point). The Ryzen 7 PRO 5850U does an excellent job of keeping up with the pack of recent processors. This puts the 5850U in a great price- and power-to-performance spot.

In SOLIDWORKS Plastics, the ThinkPad more or less matches the older but more expensive Precision laptop. This demonstrates that 2019’s high-end mobile performance can now fit into a smaller, more affordable package.

As a low-power processor, the Ryzen 7 PRO 5850U did well to keep the ThinkPad’s 3 Cell Li-Polymer 50Wh battery going under various workloads. After using the P14s as a daily driver for a few days, we observed the following results:

The Lenovo ThinkPad P14s Gen2 clearly shows that, by the numbers, AMD can bring a fully competitive entry-level SOLIDWORKS experience to the ultralight laptop form factor and price point. One thing stands out with this AMD version of the P14s Gen 2 is the performance vs power consumption. The P14s Gen 2 comes in 27% faster than Intel’s 9th Gen 45W 8-core laptop CPU, and consumes significantly less power that the current Intel 12th Gen 125W 16-core desktop CPU. It boasts middle-of-the-pack SOLIDWORKS performance with good battery, which is no small feat in such a tiny and affordable package. It should work well with SOLIDWORKS assemblies under 1000 components. SOLIDWORKS Simulation and Plastics also ran well leveraging the multi-core performance.

If there were any issues to be found, they would be heat. While testing large models in SOLIDWORKS that really pushed the processor, this machine got very hot. There is no escaping the laws of physics, especially in such a thin and light laptop. While testing large models that really pushed the processor, this machine did get noticeably warm if we weren’t careful to allow airflow through the vents. We found that propping up the back end of the machine to allow more air circulation under the machine did make a difference.

The P14s Gen 2 provides four USB Ports, two USB-C and two USB-A ports and a single HDMI. One of the USB-C ports is part of the side dock connector which we would recommend using a compatible ThinkPad Workstation Dock for use at your desk for more connected devices and monitors.

All things considered, the Lenovo ThinkPad P14s Gen2 is a great choice for light-to-moderate CAD users (even those who occasionally need FEA) who just don’t want to lug around a heavy machine that costs a fortune. It’s a small, lightweight mobile workstation that will serve well for anyone needing basic SOLIDWORKS CAD on the go.