Addition by Subtraction in SOLIDWORKS Composer

We have all heard the phrase ‘Addition by Subtraction’ before.  Often times it is referring to a sports team getting better by getting rid of a player that is bringing everyone else down (a strategy the Cleveland Browns regularly try to no avail!).  Well, SOLIDWORKS has applied that mentality to SOLIDWORKS Composer in 2016.

If you have recently upgraded your SOLIDWORKS Composer license from 2015 (or earlier) to 2016, you may have noticed that you have one less Filter option than you had before.  The ‘Show Location Keys Only’ filter is gone!  No need to worry though, this is a good thing.

This feature allowed you to see just the keys related to the locations of the actors when in Animation Mode.  Combined with the ‘Show Keys for Selected Actors Only’, you could then further break it down to specific actors.  This was needed because the position and property keys of the actors were all grouped under the same track in the timeline.  The filter was a nice way to break this down, but it was still a bit confusing to try and decipher which keys were which when they were all stacked on top of each other. 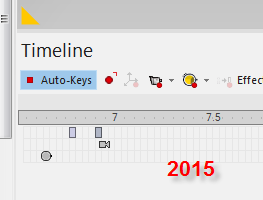 Now, in SOLIDWORKS Composer 2016, these keys have been updated for much more ease of use, clarity, and added functionality.  As you can see below, with the timeline track headings, there are eight tracks for keys as opposed to the three that were there previously. 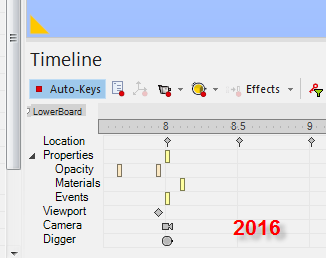 The camera and digger tracks remained the same, but the actor tracks were split into Location, Properties, and Viewport tracks; not only in different rows, but also different key icons to easily distinguish between the different types.  The properties are broken down even further, into Opacity, Materials, and Events, making it that much easier to choose the correct keys.  Thus, the subtraction of the ‘Show Location Keys Only’ filter is a welcome addition.

Have you used this function already or want to learn more? Let me know by using the comments section below.