If you’ve heard of the organization FIRST (For Inspiration and Recognition of Science and Technology), you probably know that it is directly tied to STEM and STEAM, other common acronyms used in today’s classrooms that stand for: Science, Technology, Engineering, Art, and Mathematics.

You may not realize that FIRST was founded way back in 1989 “to inspire young people’s interest and participation in science and technology.” For me, the FIRST program has accomplished just that, as I have directly benefited from the features of STEAM that come into play every day during robotics. I am currently a sophomore at Dundee High School, in Dundee, Michigan and our team is the Dundee Vi-Borgs. 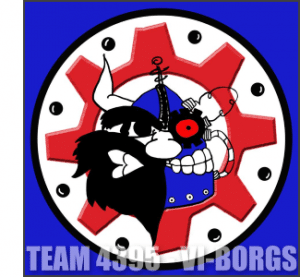 Our team consists of seven people. Vince and Arianna work on the mechanical side, while Josh works on the Electrical and programming side. Carson and I work on anything that needs help. Josh and Arianna are also the “drivers” of the robot during the competition. Josh controls the robot’s movement on the field while Arianna controls the mechanical game playing elements. These include the gear collector, ball retriever, and ball launcher. Cecily and Aubrey work on the artistic side of the team. This includes team logos, banners, garnishing the robot, and anything needing adornment.

Teams normally have six weeks to design, build and program robots for competition. We started late in the season with transferring concept sketch designs into SOLIDWORKS, so we focused on the main game playing features of the robot, primarily the ball loader. This summer, I will focus on getting the entire robot into SOLIDWORKS. We’ll start with base chassis with multiple configurations to prepare for next year’s challenges and work on possible wheel configurations.

We went through many versions of the components on our robot as we worked through testing and observing. Without the generous help of our sponsors, we would not have been able to make nearly as many prototypes for the parts composing the robot. Fisher Unitech’s support was instrumental in getting the materials needed, not only in the initial versions of the robot but also as we continued to improve and change the robot through the season.

So far this season, we have attended competitions at Pioneer High School in Ann Arbor, MI, Woodhaven High school in Brownstown, MI, and in Lake Superior State University in Sault Ste. Marie, MI. The video of how the competition game works can be found here. 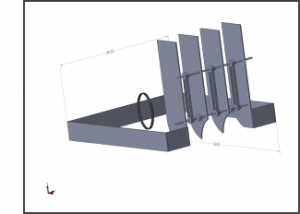 During the build competition, one of the main challenges we faced was the design of the ball feeder and its placement on the robot. Unlike the main chassis of the robot, which could be easily sketched out and followed because of its square nature, the ball feeder was a little more complicated.

The design of the feeder was not always agreed upon because everyone had slightly different ideas of what it should look like. It was decided that making a model of the ball feeder in SOLIDWORKS 3D CAD would be the best plan of action. One of our mentors, Mr. Mackenzie, made a 3D model of the ball feeder design in SOLIDWORKS and printed it. This allowed everyone to know exactly what the feeder was supposed to look like and also allowed for a faster completion of this portion of the robot. 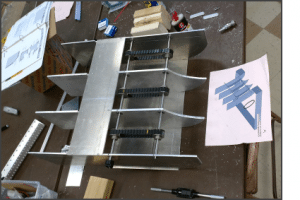 SOLIDWORKS helped us overcome obstacles commonly faced in the robotics classroom. It helped us collaborate better, which helped us complete the component designs much faster. The ball feeder would have taken a considerably longer time if it were not for the software.

In later blog posts, we will go into challenges faced at each of the competitions and how our team overcame these obstacles to have one of our best seasons since the inception of the FIRST Robotics program at Dundee High School. 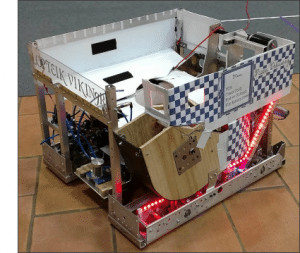 For me personally, the experience in the FIRST Robotics program at Dundee has pushed me much further into wanting to become an Electrical Engineer or to get a degree in Mechatronics. One of my friends suggested for me to join, and initially, I helped in building the main mechanical components. As I learned more about the electrical and wiring aspects, I learned some programming and observed the construction of the components on the robot.

What I did not expect, was the overall time commitment required because of our team size. It was not out of the ordinary to spend at least five evenings in the week working on the robot. However, every bit of that time in the classroom was jam packed with new learning opportunities. It has overall greatly increased my aspirations for going into an engineering field and has given me insight into the development of robotic machinery.

How the STEM Program Can Help Shape our Future Engineers


SOLIDWORKS and its Impact on our Future Generation

Ethan Harper is a student at Dundee High School in Dundee, Michigan. He has been learning SOLIDWORKS since the beginning of this year. He joined the Dundee Vi-Borgs FIRST Robotics team in the fall of 2016 and plans to be a part of the program for as long as he can. Follow the team’s adventures online here.