Steampunks, STEAMworks, and SOLIDWORKS in the 2017 FIRST Robotics Competition

I was a very shy, introverted kid who, although open to trying new things, would never imagine growing up to be the outgoing person I am today. I owe much of who I am to the FIRST Robotics team at Jefferson Township High School in New Jersey.

The FIRST Robotics team started when I was a junior. One of my woodshop teachers suggested I get involved and here I am nine years later. I was on the team for my junior year and co-captain of the team during my senior year. I have been a mentor for the team ever since I graduated high school. Our team is Team 2600 or Team Falcon.

A little about FIRST

For those who don’t know, FIRST stands for “For Inspiration and Recognition of Science and Technology”. FIRST has different programs for different levels of students. There is FIRST LEGO League Jr. (FLL Jr.), FIRST LEGO League (FLL), FIRST Tech Challenge (FTC) and the FIRST Robotics Competition (FRC). 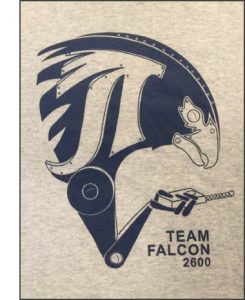 Team Falcon is located in Jefferson Township, New Jersey. The students are at the high school level and therefore participate in FRC. Every year, a new challenge is developed by FIRST and presented to students in the beginning of January. From that time, teams have six weeks to design, build and test their robot. The building of these robots is no small ordeal. Some years, robots can reach up to five feet in height depending on the needs and regulations of the challenge.

Like any team, it all comes down to the group of people who will be working on the project. We are led by Mr. Januszeski, a robotics, woodshop and engineering teacher at Jefferson. Mr. J has also been there from the beginning of our team back in 2008. Together, we lead a small group of students with big ideas.

They are some of the most dedicated students I have ever worked with, even volunteering their Saturdays to come into school and get the robot done. You’d probably think that school is the last place students want to be on a Saturday, but that is exactly where these students were: in school overcoming challenges, thinking their way through problems and working as a team towards a common goal.

The FRC challenge this year was steampunk themed and involved a game that had overtones of the classic adventure novel “Around the World in 80 Days”. The challenge named STEAMworks included not only the steampunk theme, but also the acronym STEAM, which stands for Science, Technology, Engineering, Arts and Math. All of which are areas of skill that FIRST Robotics team members are exposed to.

For this year’s STEAMworks challenge, teams could build a robot to pick up and launch balls to “fuel” a boiler, or a robot to retrieve gears and bring them to their airship to be placed in a gear system that would allow the rudders of the airship to spin. At the end of the match, the robots would need to climb a rope in order to be “docked” on the airship and ready for takeoff. Students could choose to complete one or all of the challenges presented.

There was also the added challenge of running the robot autonomously in the beginning of the match. This means that students could program their robots to either throw the fuel or deliver gears without a human driving it. Some teams even attempted to do both during autonomous.

Our team chose the functions of our robot based on number of points earned in the game. Gears and climbing were the most points therefore, that is what we chose to focus on. The design process is filled with early mornings, pencils and paper, white board drawings, friendly discussions, prototyping, SOLIDWORKS and, of course, donuts. 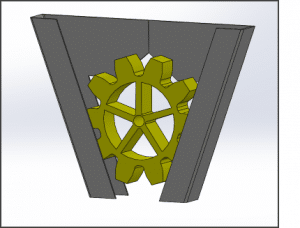 There was one major area of the design that we weren’t quite sure how to create. We had to bend our sheet metal to create the gear catcher. This was a major part of the design. We needed to have a gear catcher if we hoped to pick up and deliver gears to our airship and soar away to victory. Luckily, we were able to use the Sheet Metal capabilities of SOLIDWORKS to not only design our gear catcher, but actually print and use as a bend template on our sheet metal blank.

With the use of SOLIDWORKS, we were able to reverse engineer our pattern by sketching and creating the completed body first and then flattening the bends to 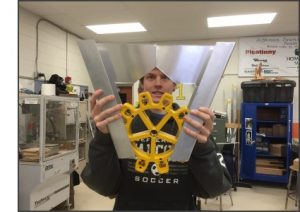 get the flat pattern. We started by drawing a gear in SOLIDWORKS in order to get our dimensions and fit of the gear. We then designed the gear catcher around the gear itself. Before ever building the real-life counterpart of the model we had created, SOLIDWORKS was able to show us the fit of the gear within the gear catcher. Because SOLIDWORKS is so intuitive and easy to use, we were able to design, print and bend our sheet metal part much faster and much more accurately than if we had to draw it out by hand. The team had the part designed, tested within SOLIDWORKS, printed, cut and bent within the hour and we were back on track to do some live testing with the actual parts. Time is not something to waste when you only have six weeks to design, build and test a full size robot. 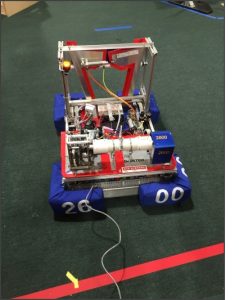 The actual competition sneaks up quickly when you’re building robots, and this year was no exception. Teams in the Mid-Atlantic Region go to two district competitions and therefore have two events to show what they’re made of and qualify for the regional championship. During our first competition, the team was able to see how our robot performed in the actual arena. Like any good designer/engineer would do, they re-evaluated the design and tweaked it throughout the competition so that they would be ready for the next one. During the second competition, the students brought their A-game and took it all the way to the finals. Their hard work and determination got us second place in the district. This was a big year for us as we have never made it so far!

What’s next for the team? They are taking on new challenges as they are currently changing the program in which they code in and thinking up new projects for themselves in between seasons so they can be ready for next year’s season. I’m told they are making robots to race around the school. You can’t have a whole lot of learning without a little (or a lot) of fun!

Why have I kept going back to FIRST Robotics all these years? Why drive a few hours back to my home town every Saturday for six weeks? Why spend countless hours guiding a group of kids who are building a robot? The answer is easy: It’s not about the robot. It’s about the kids who are building the robot. They teach you as much as you teach them. The students and teachers at Jefferson have always welcomed me to mentor them. They are smart, they are driven and they are passionate about what they do. I am so proud of them and proud to be part of the team. I think FIRST put it best: we are not building robots; we are “building machines that build the people who will change the world”. That is what matters most.

FIRST has inspired the team in many ways. Many of our team members will be going on to careers in the trades and others to college for engineering, science and other degrees. No matter what we do in life, students remember this experience and it has a lasting impact. I know it has on me. Try going to a competition and you’ll see why. You’ll catch “FIRST Fever”.