The Future of Manufacturing: Innovations in 3D Printing

3D printed prototypes have allowed designers and engineers to turn their ideas into reality with parts they can physically hold and manipulate. This technology 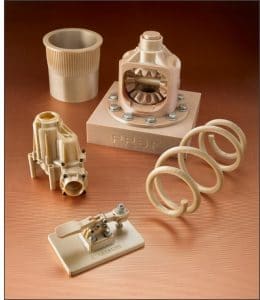 has spurred innovation across multiple industries and changed the way people approach challenges. From a 3D printed splint that clears a baby’s airway to an aerospace part created in half the time, the benefits of rapid prototyping are numerous.

3D printing companies have known the benefits of their products for years and are now getting others up to speed on this innovative way of creating solutions. Stratasys, for example, has been in the industry for more than 25 years and fostered relationships with manufacturers, engineers, and designers around the globe. The company recently released a video highlighting how their products’ capabilities have tapped into people’s imaginations and accelerated progress across industries.

The video makes an important point about what 3D printing has already solved for us, and it hints at what the technology could do in the future. Here are four industries where 3D printing is making a difference—and where it might go next.

3D printing is getting a lot of buzz for its life-saving applications in the medical field. The Food and Drug Administration (FDA) lists a number of 3D-printed medical devices that are currently commercially available, including instrumentation, implants, and external prostheses. These devices can be “patient-matched” to a person’s particular anatomy and are regulated by the FDA—an organization that even has its own 3D printers to test device quality. However, in some cases, emergency clearance is made. One little boy, for example, received experimental treatment in the form of a 3D printed splint made of polycaprolactone to help clear his airway.

Medical 3D printing has allowed people to quickly and inexpensively create prosthetics, and technology moving forward should result in more custom, fluid models that can improve the lives of thousands. And although functioning, 3D-printed organs are not yet a reality, science is working on getting there!

3D Printing in Aerospace and Aviation 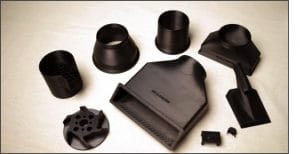 In industries where stronger, lighter materials are crucial, 3D printing is becoming a solid investment. Aircraft and aerospace companies alike are using 3D printing to rapidly prototype parts that are difficult to produce with traditional manufacturing using materials such as the Nylon 12 material. The end result? Lighter, more effective parts that can be changed more easily by designers and engineers.

Stratasys has helped companies in these industries save significant time and money by moving away from traditional manufacturing. Rocket Crafters, for example, used Stratasys’ Fortus 3D Production Systems platform to produce large grain sections in a stable polymer that is more consistent and less expensive than when it is produced manually. In the future, we can expect more aerospace companies to continue adapting 3D printing in order to solve complex problems, as well as prototype more quickly and efficiently to create better products at a lower cost.

Similar to the aerospace industry, manufacturers are seeing big benefits from utilizing 3D printing technology. Rapid prototyping allows manufacturers to quickly see what works and what doesn’t, saving them time and money—especially when you consider that 3D models can shave months off the design process.

3D printing is also changing what companies manufacture. According to a study cited by Forbes, 11% of manufacturing companies have already switched to producing 3D-printed end-use parts or products. This article also points out that companies requiring low volume production can do so in a much more cost-effective way because there aren’t set-up costs with 3D printing. And the same technology that can produce your parts in bulk can also make a single, customized piece with ease.

It would not be surprising if entire business models will change along with 3D printing, as companies continue to adapt in order to make cheaper, but still effective products.

Professionals aren’t the only ones using 3D printing technology—students are also getting in on the game. 3D printers are now being built to accommodate a wider variety of environments and with more user-friendly features. This allows 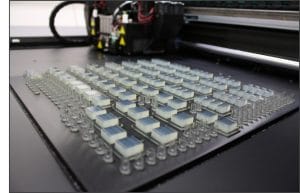 students to get more experience with design and engineering. The University of Alabama Huntsville, for example, needed to accommodate a higher number of students looking to make more complex models. According to Stratasys, the school eventually selected a Fortus® 3D Production System for its ability to quickly produce complex models. The case study highlighted that students find the printer easy to use and are now garnering interest from the community in their 3D printing capabilities.

While 3D printing is taking off in a variety of industries across the globe, new 3D printing material capabilities that were once thought imaginary is now taking form.

Metal 3D printing began to surface just a few years ago and has become increasingly popular in a variety of different industries. Due to its practicality, metal 3D printing is often used for the production of prototypes, jewelry, consumer goods, and automotive manufacturing, among others.

Systems like the Desktop Metal Studio System and Production system can often produce parts that are equal to or even better than traditionally manufactured parts eliminating prototyping steps and help you to get to end-productions faster.

The production of 3D printing electronics is still relatively new, but sparking a lot of interest. Nano Dimension lets users print 3D printed circuit boards with their Dragonfly 2020 Pro system. This ultimately provides an end-to-end process in-house beginning with electrical and PCB CAD software which can then be printed, prototyped, and tested on the Dragonfly 2020.

The Future of 3D printing

With industries across the board continuing to adapt and innovate with 3D printing, we can only guess at what the future may hold. While we know it will save time, money, and even lives, 3D printing alone can only take us so far. It’s up to the world’s designers, engineers, and manufacturers to utilize this technology and turn their ideas into reality!