Splitting a face of geometry in SOLIDWORKS can be very useful in FEA for a number of reasons:

There are two methods to split a face in SOLIDWORKS that the user can exploit for analysis purposes:

This tool can be used after creating a sketch that represents the region to be split. For example, to split a face into two, the user can draw a line running across the face, and use Split Line to create two faces by selecting the sketch and the face. The user can also draw closed contours (like circles, polygons, ellipses etc.) and split a face to match the contour. As seen in the adjoining figure, the split line tool is being used to split the face of the rectangular block into two independent faces with the help of a straight line. 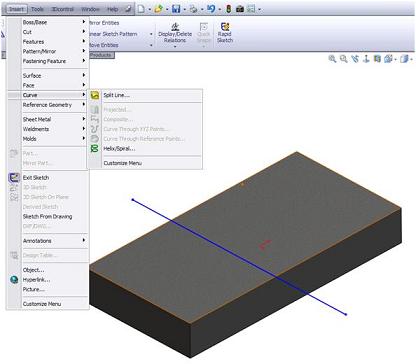 NOTE: Only one closed contour can be used for every split line. Hence, to create 4 new regions, the user must create 4 split lines, with 4 underlying sketches.

This tool can be used after creating a single sketch that contains multiple closed contours. For example, if a face has to be divided into 10 different regions, the user can draw closed contours representing the 10 regions all in one sketch, and use this command to divide the face. As seen in the adjoining figure, the wrap tool is being used to split the face of the rectangular profile into multiple faces. 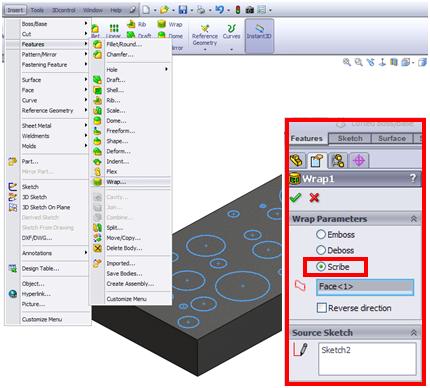 NOTE: Choose the sketch before entering the WRAP command, and select the Scribe option when picking the face to be split.

Once such independent faces have been created, it is very simple for a user to select the face(s) to apply different boundary conditions in COSMOS.