Had a little scare yesterday and since misery loves company I thought I would share it with you.

Yesterday I received an email with this image: 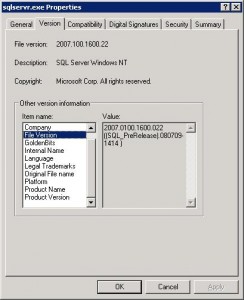 These are the file properties of the Microsoft SQL 2008 install that comes with SOLIDWORKS Enterprise PDM. Look closely, it says that it is a prerelease! Yikes! Using a prerelease for production data?

I’ve done some checking and this SQL build (also known as 10.0.1600.22) is a a RTM build. [Reference] I have no idea why it says prerelease in the version information.  If you are concerned, there is a service pack can be downloaded from the Microsoft web site.

Heart attack averted. As you were.

Women in Engineering: Taking a Step to Bridge the Gap

I Need To Use A Non-True Type Font