Every Wednesday of SOLIDWORKS World they show the top ten enhancement requests for their next design cycle. Enhancement requests are submitted by users (through the customer portal or via other means) and are an important tool used to determine the direction of future releases. SOLIDWORKS announced that over the last ten years, 70% of all top ten enhancements read at SOLIDWORKS World have made it into the released version of SolidWorks. 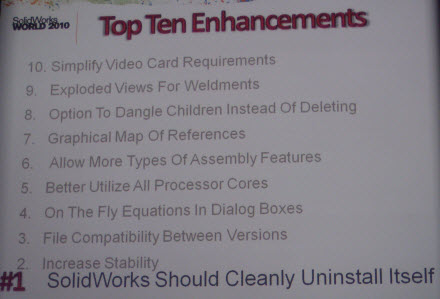 While I can appreciate all of these enhancements, and would love to have them in the product today…how did #1 become #1? #1 would only affect users a few times a year, how could users pick something that would be used so seldom compared something that could help them perform their everyday tasks? Of these ten, here is how I would have ordered them:

10. SOLIDWORKS should cleanly uninstall itself. (..and many others before this one!)
9. Graphical map of references
8. On the fly equations & Dialog boxes
7. Option to dangle children and not have to delete them
6. Exploded views for weldments
5. Better utilization of CPU/cores
4. Allow more types of assembly features
3. Increase stability
2. Simplify video card requirements (almost the same thing as #3)
1. File compatibility between versions