Update References for adding files into the vault

Look at Johny sitting over there in the cubical next to yours balancing a spoon on his nose. You often wonder how he became an engineer, well actually you don’t – he’s the owner’s kid. You’re the one always stuck cleaning up his mess.

Johny is not not very careful about where he saves his files. He saves most of the files in the vault but it is not uncommon for many of them to exist only on his local hard drive.

You found this very nice feature in SOLIDWORKS Enterprise PDM that would forbid an assembly from going into EPDM if files were outside of the vault, but you were scolded for stifling Johny’s creativity. (Jedi’s note: this option is a great option to have on – for everybody. Assemblies in the vault should only reference files inside the vault, if it references files outside of the vault a messy future you will have.)

Luckily new in EPDM 2011 the “Update References” tool makes it easy to automatically pull referenced documents into the vault.

Sit down on Johny’s machine, highlight the assembly and choose “Update References” 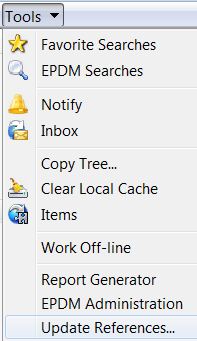 Highlight the files outside of the vault and click the “Add files to vault” button. 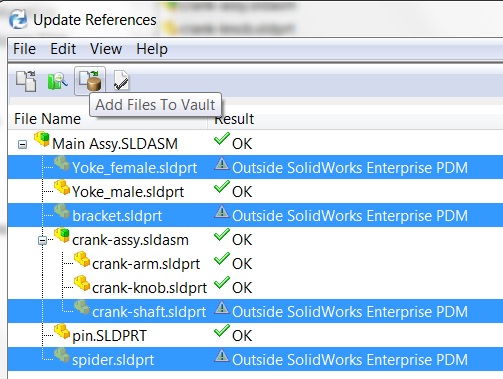 You will then be asked to select where in the vault you want these files added, then “Update References” will copy the files and fix the references in the assembly.

Find the status of your EPDM search

Give each EPDM project its own part numbering scheme