This year’s DriveWorks World began with “What’s New in DriveWorks 8 and DriveWorks Solo”. I was very excited to see how much they have added to the user input forms. Controls’ position are now programmable plus they can be represented by images instead of traditional Windows looking controls. Now your user input forms don’t have to look like a typical Windows form that you might build with Visual Basic, but they can be much richer and professional looking. Imagine radio buttons being pictures of the actual options, not words. Now a user can click on an image of his chosen “material” options, not its name. 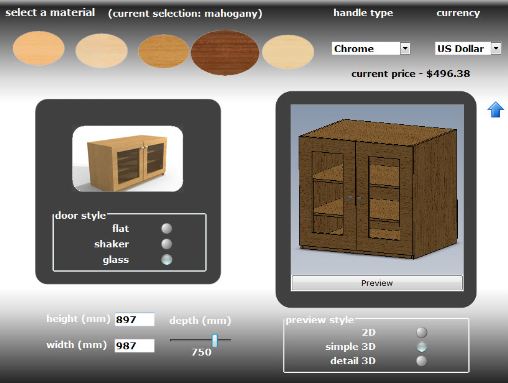 (In this image, the material selection in the top left-hand side is really option buttons, where mahogany is selected. Notice the new slider control near the bottom? How about the “The Rectangle of Inevitable Coolness”…a.k.a a preview window? Yeah, you can now have a nice 3D preview right within the form!)

DriveWorks Solo also has some nice form enhancements, but what I think you will really like is the new “Layout Mode”. This new mode will allow you to run your specification over and over and add your new clones to an upper level assembly. Imagine being asked to fill a kitchen with cupboards. You would start off with your kitchen walls and existing furnature and start your Solo’s cupboard project. Once you have generated a set of cupboards you can place them in your kitchen, then run the project again and again, placing your cupboards as you go.

After our “What’s New” presentation, I attended a session lead by Phillip Stears. Phillip started the session by surveying the room. His survey revealed a surprisingly small number of people in the room have incorporated “specification flow” -a feature introduced in DriveWorks 7. Phillip threw down his gloves and did an impromptu demonstration of how specification flow can be used to help companies track and manage orders as they may change during sales process. His impromptu demonstration ended up taking all of our alloted time, but I found it informative and now can answer any question out there about specification flows…go on ask me!

My last session of the day was with Paul Gimbel. (Don’t bother following the link, it is to his blog that he hasn’t updated since I was a little Engineering Data Specialist.) Paul’s topic was a rather clever about strategies for building SOLIDWORKS models. Certainly DriveWorks can drive any SOLIDWORKS model, but he had some nice little tips to use to give your models more flexibility than you typically would have.

As part of the presentation, Paul did show us a nice SOLIDWORKS option that I had never thought of…

This option is a huge time saver for drawings if you use DriveWorks to delete features and don’t want those deleted features’ dimensions to be displayed. Until now, I had been doing this by putting them on layers and manipulating the layers. Points to Paul for saving me time.

I still don’t have my own license codes yet, so I’ll certainly tell you more once I can install DriveWorks 8 it myself.

Starting off with SOLIDWORKS Surfacing

Stratasys F120: A Conscious Choice for a Unique Industry