SOLIDWORKS 2012 has a great NEW feature in Sheetmetal that a lot of people have been asking for over the years. It is the ability to EXCLUDE certain faces from trying to flatten, thus making it possible to create things like strengthening ribs on a bracket. 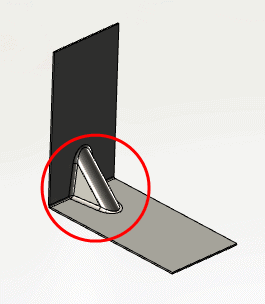 In the past you could of course model this, but when you tried to get the flat pattern it would fail.
Now in SOLIDWORKS 2012 you can EDIT the FLAT PATTERN feature and just select the “rib faces” (on BOTH sides) in the new “Faces To Exclude” box. Then the Flat Pattern will “ignore” those faces and flatten just fine.

It even has some really cool new functionality of being able to just right click a face and use “Select Tangency” to get the faces in a couple quick clicks rather than picking them all individually AND it is smart enough to not run the tangency selection past the fillets!
Pretty cool stuff !! Give it a try !

2 comments on “Strengthening Ribs in Sheetmetal – NEW in SW2012”