SOLIDWORKS Composer provides a way for technical documentation authors to leverage CAD data towards the development of powerful, dynamic illustrations. Bringing these models into Composer, in itself, is a meaningful task that requires some forethought. There are plenty of options to control what information is transferred and how it gets transferred, but I just want to focus on two here: “Open” and “Merge into a new document.”

Both of these options can successfully bring CAD files into Composer, though there are some structural differences that may affect your ability to evolve the project. Let’s take a look at where they diverge.

When you use “Open” to load a model into Composer, the software puts that model at the top of the hierarchy in the assembly tree. Composer refers to this top-level entity as the “root.”

The results of the “Open” method are displayed in the picture below. As shown in the tree, the imported Cabinet assembly file is the root (indicated by the globe icon), and its components are listed underneath. This is similar to the SOLIDWORKS FeatureManager for this assembly.

This organization method can cause some confusion if you need to insert other CAD files, though. If any other models are added to the document later on, they will also be listed under the root, making it appear as though they are components of that assembly rather than separate files.

In this case, a Lamp assembly from SOLIDWORKS is brought in using the “Merge into the current document” option from the Open command. Even though the Lamp model has no relationship with the Cabinet in SOLIDWORKS, it is listed in the tree amidst the Cabinet assembly’s components.

For what it’s worth, Composer would show a different icon in the assembly tree if the Lamp were truly a subassembly of the Cabinet: Rather than the white “L” seen above (denoting the Lamp as an “internal structure,” or simply a “group”), it would use the typical SOLIDWORKS assembly logo (a yellow upside-down “T” with a blue cube in its upper-right corner). Regardless, the intermingling between the Lamp and the Cabinet components might lead to the assumption that the Lamp is part of the Cabinet model, potentially causing confusion in BOMs or other documentation during the illustration process.

Merge into a new document

If “Merge into a new document” is selected when importing, Composer creates a top-level Root folder within which the model is stored. This essentially adds a tier to the hierarchy—the CAD file is no longer at the top, but rather it is a sublevel of the Root.

The image below shows the results of a “Merge into a new document” operation with the Cabinet. The Cabinet is recognized as a group of geometry actors nested inside the Root.

With this approach, any other models that get merged into the document following the initial import will appear within the Root folder but not within the existing model, making it easy to understand the relationships—or lack thereof—between the actors.

When the Lamp is inserted into this document, the assembly tree separates it from the Cabinet assembly. Unlike with the “Open” method above, there is no ambiguity as to the relationship between the Lamp and the Cabinet; they are simply distinct groups within the Root. 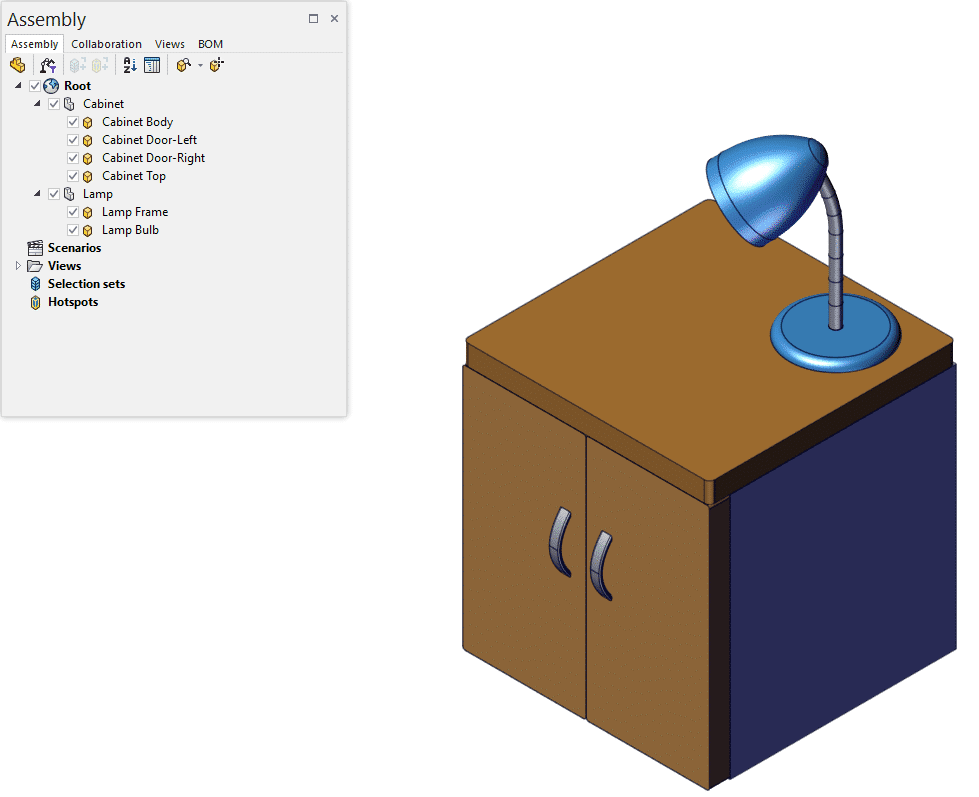 There are also some differences in the way these two methods handle multiple files. If two or more CAD models are selected when you use the “Open” option, each one will get its own document. If “Merge into a new document” is enabled instead, all models will be added to a single Root folder.

I, personally, think “Merge into a new document” makes the most sense of the two approaches. If your scope expands to encompass multiple CAD files, this method will ensure your assembly tree always distinguishes unrelated models. Still, if you’re confident you will only need to detail a single CAD model and you want to avoid the extra layer of the Root folder, you may prefer the “Open” approach. Whichever you use, I hope this explanation has at least given you enough information to feel confident in your decision.