Back in the year 2000, a new American television series aired on Comedy Central called BattleBots. The name alone conjures up images of fighting robots, but exactly what kind of robots? Simply put, remote controlled machines designed for combat that would fight to the death in an arena. Funny yes, but also ingenious.

BattleBots ran for a couple of years, then took a hiatus only to return to ABC TV in 2015. Imagine the evolution of technologies and materials that took place over those 15 years. Fast forward to 2017 and today’s fighting robots are more sophisticated and fiercer than ever. The ingenuity continues from spinning blades to clamping jaws and 250 pounds of heavy armor. BattleBots now has a global following with more than 150 countries soon broadcasting the show.

What kind of person builds fighting robots in his or her spare time? Turns out 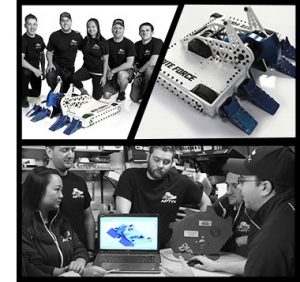 people of all ages and professional backgrounds do. Everyone from retired plumbers to aerospace engineers. Yet something they all have in common, whether it’s an engineering degree or not, is a whole lot of passion, innovative designs, and a knack for entertainment—which is why it takes a team to build one.

With names like Team IceWave, Team BiteForce, Team LockJaw, and Team Brutus, you get a sense that these people are not only serious about their combat robots, they are in it to win it. All efforts point toward building a champion fighter, no exceptions.

So when it comes to the development process, these teams all use SOLIDWORKS 3D CAD tools to turn their ideas into robots that, when you get down to it, are really complex machine assemblies.

SOLIDWORKS tools include design functionality for mechanical, electrical, and printed circuit boards (PCB) as well as product data management (PDM) so team members can collaborate on designs together or remotely in a secure data vault. SOLIDWORKS tools also include virtual simulation and analysis. With a virtual simulation environment, a team can evaluate how the robot’s components would perform in a real-world scenario and make design changes early in the development process without going through time-consuming and expensive physical prototyping and testing.

Whether you are a robot enthusiast or not, it’s hard to take your eyes off of a BattleBots show. You can see some footage of the teams talking about their innovations and robot fights in action here.