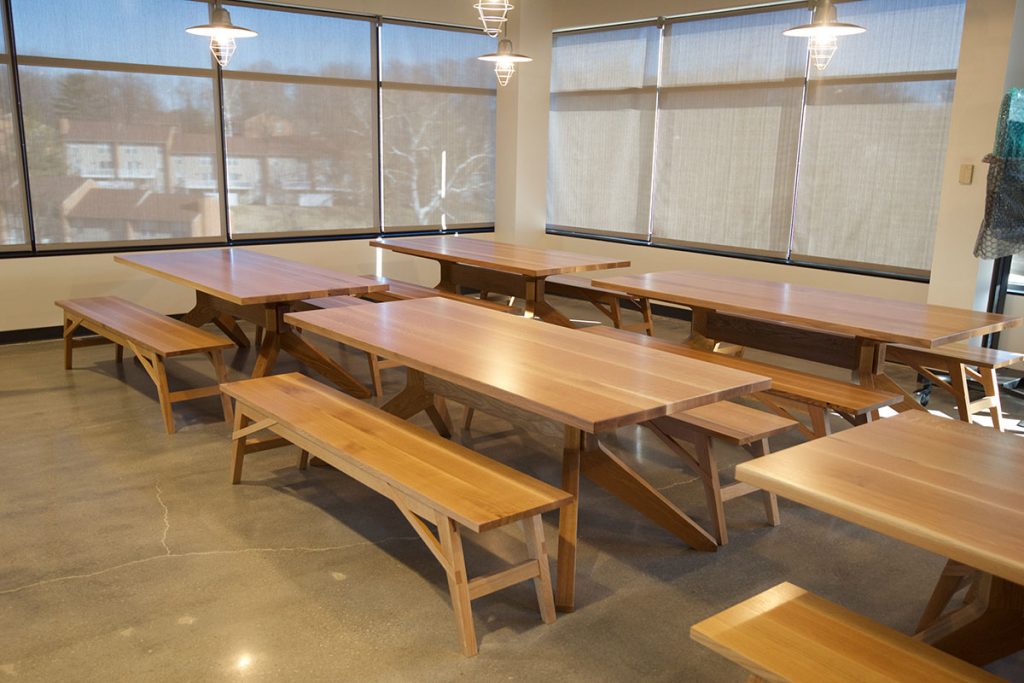 Most people think of top-end, bespoke handcrafted furniture as in opposition to the quick work SOLIDWORKS makes of prototyping and design. For Martin Goebel, president and design director at Goebel & Co. Furniture in Saint Louis, Missouri, the two go hand in hand. Martin has made it his mission to marry traditional, analog furniture-making to modern, digital design. He started out with a traditional European apprenticeship in northern California when he was 19, working under a renowned handmade furniture maker, before going on to get his Master’s in Furniture and Product Design at Rhode Island School of Design. “I was never in the digital realm before graduate school,” says Martin, “but the recession especially gave me this kick in the teeth about you can’t just be making $5,000 coffee tables and expect to be busy all that much. Oddly enough, now we can do that all day. So, my Master’s program at RISD was the first exposure to digital design, and I did my Master’s degree in furniture design on that basis of taking the craft process and synthesizing it to be able to produce more.”

After completing his Master’s, Martin worked in the mass-manufacturing furniture industry before returning to his hometown of Saint Louis in 2010 to start Goebel & Co Furniture. “We’re finally getting to the point where we are expanding our shop to about 13,000 square feet and bringing all of the automated production in-house now,” says Martin. “So, we’re going to have CNC equipment running on our floor, as opposed to outsourcing those components.” Currently, Martin and his team have been using subcontractors from all over Missouri for completing furniture pieces. “We’re mainly a wood manufacturing facility, but we still design for stone, metal, glass composites, any number of things,” Martin says. “With SOLIDWORKS models, I can just design it, export it directly to these various subcontractors in various file-types, and then they’re creating with the same actual models that we are.” Martin has found that using SOLIDWORKS makes it easily compatible between various vendors, eliminating some of the frustration and rework of trying to communicate a cohesive design from start to finish without things getting lost in translation.

Martin walks us through a typical design process for Goebel & Co. “Everything we do is designed in SOLIDWORKS,” Martin says. “We take the entire composition of furniture, we chop it into components, and then we either create them by hand, or we create them digitally through the CNC process using the SOLIDWORKS drawings. Generally anything with a curve in it is created with a CNC machine based on the SOLIDWORKS drawings.” But not all of their projects can be fully automated. Sometimes, a curved piece can come out to 95% accuracy with automation, and rather than it taking two or three more hours to get up to 98% perfect with the CNC, Martin says that’s when they take matters into their own hands—literally. “There’s a point in which the automation becomes inefficient, and we bring the components back in, we finish them by hand, we assemble them with the other handmade components, and then we sell to any number of people.” 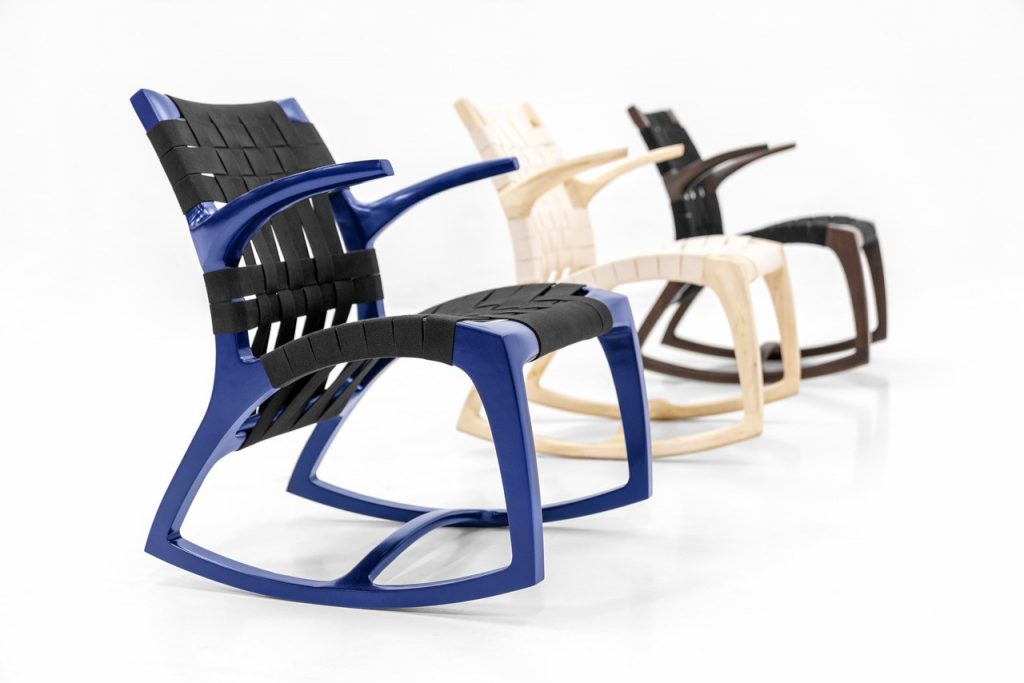 Says Martin of their output with SOLIDWORKS, “Our company produced a little over 1,200 pieces last year, and we did that with two full-time craftsmen, a shop manager, and then office staff, and myself. Now, there’s six on the floor full-time today and another four part-time. But, the only way to do that volume is to be leveraging the digital. If they were doing purely handcrafted furniture, there’s just no way to do that volume of work. But in the case that we’re having components produced by any number of people, we’re able to push a lot of work to a level that just far surpasses the output of a few people doing it purely by hand. One plus one equals two; one plus one plus technology equals 20. That is exponential when you have more people, because it’s just all a matter of a system working as one as opposed to individuals working individually.”

It might seem counter-intuitive, but digital design has helped Martin, as head designer, with more ergonomic forms. “What SOLIDWORKS allows you to do is work organically,” says Martin. “So, it is a ones and zeros thing, but now I can design things that are more based on human geometry and curvatures. Using the surface modeling, as opposed to the solid modeling, you can really get curvatures that are repeatable. I equate it to someone who can bake the greatest chocolate chip cookie in the world, but then can’t remember how they did it. What SOLIDWORKS does is write down that recipe, because now if I make one perfect piece, or even if I make one that’s 99% there, I can go back and tweak that last one percent with my next iteration in the prototyping process.” And the time that saves without sacrificing handicraft? That’s exactly what Martin is looking for.

So, what’s Goebel & Co. working on today? Martin says that his custom furniture has found a niche market for custom pieces in Southeast Asia, where common American types of wood—oak, maple, cherry—are considered exotic. In addition to that, a hotel in Zürich with French designer Philippe Starck, and a project going with CATI customer Nike’s corporate offices in Oregon.

“In the past I was a purely hand craftsman and wrote my Master’s thesis on how this is done. When I was a purely hand craftsman, there were significant hurtles that I couldn’t get over because I just didn’t have any way to quantify what I was doing. I could be the best illustrator in the world, and draw beautiful drawing, but unless I can quantify very, very incremental differences, it’s sort of a moot point. Or more importantly, even if I do draw this wonderful thing, translating that into a physical object from a 2D sketch to a 3D something, there’s no one-to-one there. This is now the bridge between concept and product.” 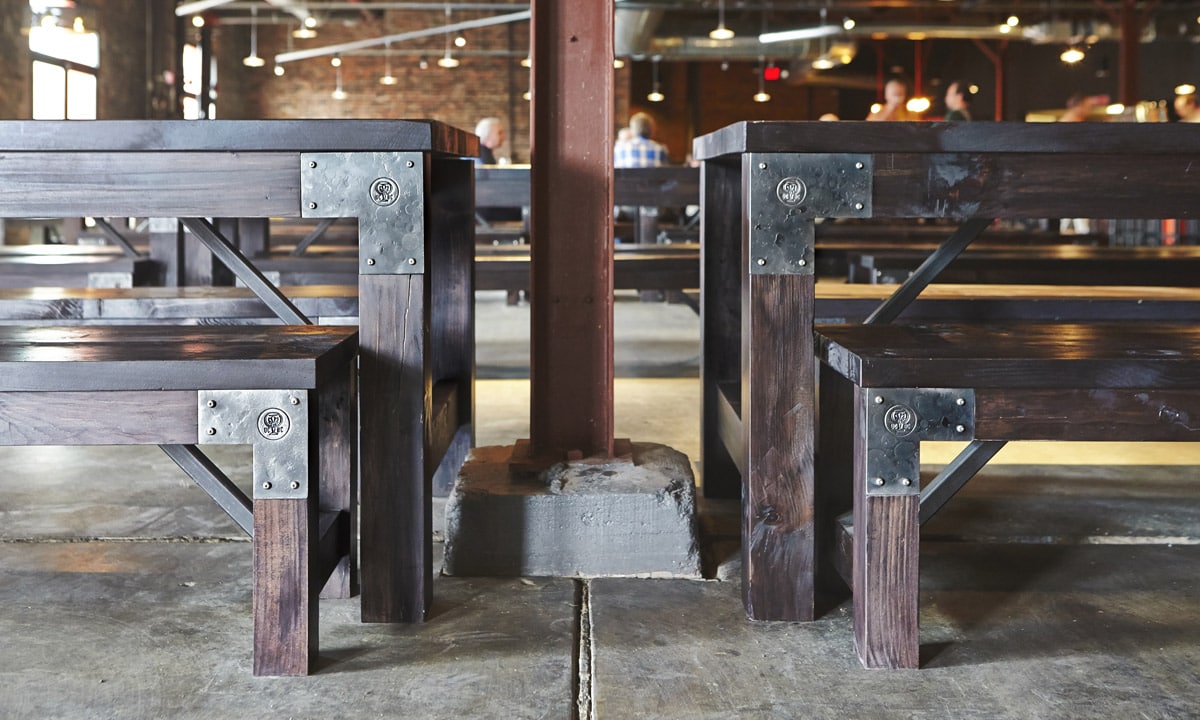