There’s a commercial that used to play all the time. It wasn’t long ago, probably within the past year. The essence of the commercial is that you wouldn’t take your child on a space mission with you because he/she will just click every button. Can you imagine the never ending question, “what does this do?” Well when people start using SOLIDWORKS PDM for the first time, that tends to be the first question our of their mouth. This week, we’re starting a new blog series – SOLIDWORKS PDM: What does this feature do? In this series, we’re going through some of the functions of SOLIDWORKS PDM. This isn’t a “how-to” series, but more an informative series. Instead, we want to explain some of the tools that might be a little confusing. First up, Delete or Destroy in SOLIDWORKS PDM.

What’s the difference between Delete and Destroy?

This is, naturally, an early question for PDM users. Nobody wants to accidentally delete their files. But what the difference between delete and destroy? First, what does the delete function do?

Similar to how it works in Windows, just clicking Delete on a file doesn’t delete it forever. This might seem strange to some people because in many cloud systems, deleting a file from a folder means it’s gone forever. Delete simply sends the file to the parent folder’s recycling bin. So, to recover the files, you can go back to the recycling bin and recover the files.

This is great news because the files still exist when you delete a file in PDM. It also means that not everybody has full rights to completely remove a file. But it does mean that you may go looking for a file and not be able to find it right away. 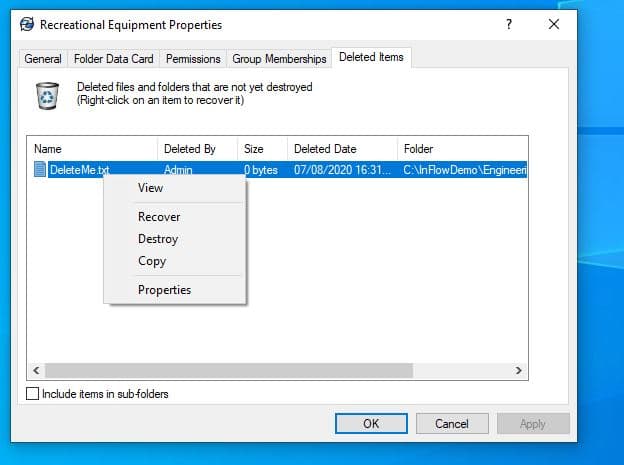 Well, in SOLIDWORKS PDM, you can right click on a folder, go to Properties, and then the deleted items tab. This tab contains every deleted file from that folder. Additionally, you get information such as who deleted item and when. You can right-click a file and recover it if you come across one that was deleted by mistake.

Also, I want you to notice the different options I have available to me. I can recover or destroy a file because I’m logged in as an administrator. However, if you are logged in without permissions to destroy a file, you will notice that Destroy is not an option.

Let’s talk more about destroying a file and what that means. While it may seem clear that destroying a file removes it from the folder for good, it’s important to remember that SOLIDWORKS PDM runs with a SQL database behind the scenes.

You’re only going to allow some users to destroy a file. This seems pretty obvious. What if you hired an intern last week and they accidentally deleted a file or two? You don’t want those files lost forever, so PDM helps take care of that.

When you destroy a file, it does more than just remove the physical file from the folder. In addition to that, the record is also removed from the SQL database and the file is removed from the archive. This clears up space in the database and on the disk, but also destroys the file. Therefore, and I say this as a caution, be very careful and mindful of which files you destroy. The difference between doing a delete or destroy can be critical to how you recover from a mistake.

When you want to destroy a file, there are a couple of ways to do it. The first is to delete the file and then go into the Deleted Items and click Destroy. But that’s a lot of clicks, and personally, I would want a faster way. Well, lucky for me (and you) there is another way. Just like in Windows, you can hold down Shift and press Delete. When that happens, you’ll get a dialog asking if you’re sure you want to destroy the file. If you say you are, the file will be removed from the system.

So… Delete or Destroy?

That wraps up our first edition of, ” SOLIDWORKS PDM: What Does This Do?” Check back next week as we go through another function in PDM: Branch and Merge