Mate References With and Without Names

Just as a quick reminder, a Mate Reference allows you to realize the benefits of drag & drop mating (SmartMates) without the requirement of having the part open. You can pre-identify and store in the part model the faces, edges, or vertices that you would like to use to mate with. Then it’s just a matter of dragging and dropping the part (from the Design Library for example) into your assembly and having it snap in place when you get close to where you want it.

Named vs Not Named…

Mate References (found under Insert > Reference Geometry) have two different ways they can be utilized. Both ways allow for up to 3 different faces, edges, or vertices to be specified for mating. A mate reference without a name uses the Primary, Secondary, and Tertiary references in that order. When you insert the part into an assembly SOLIDWORKS looks for potential things to mate to. If the primary entity is not valid for the entity your pointer is over, then the secondary entity is used. If neither the primary nor secondary entities are valid, then the tertiary entity is used. When a part with a mate reference with a name is inserted into an assembly it seeks out components with a “matching” mate reference them together.

Consider the example below. This is an example of a Mate Reference without a name. It just shows the default of “Default” for the name…. 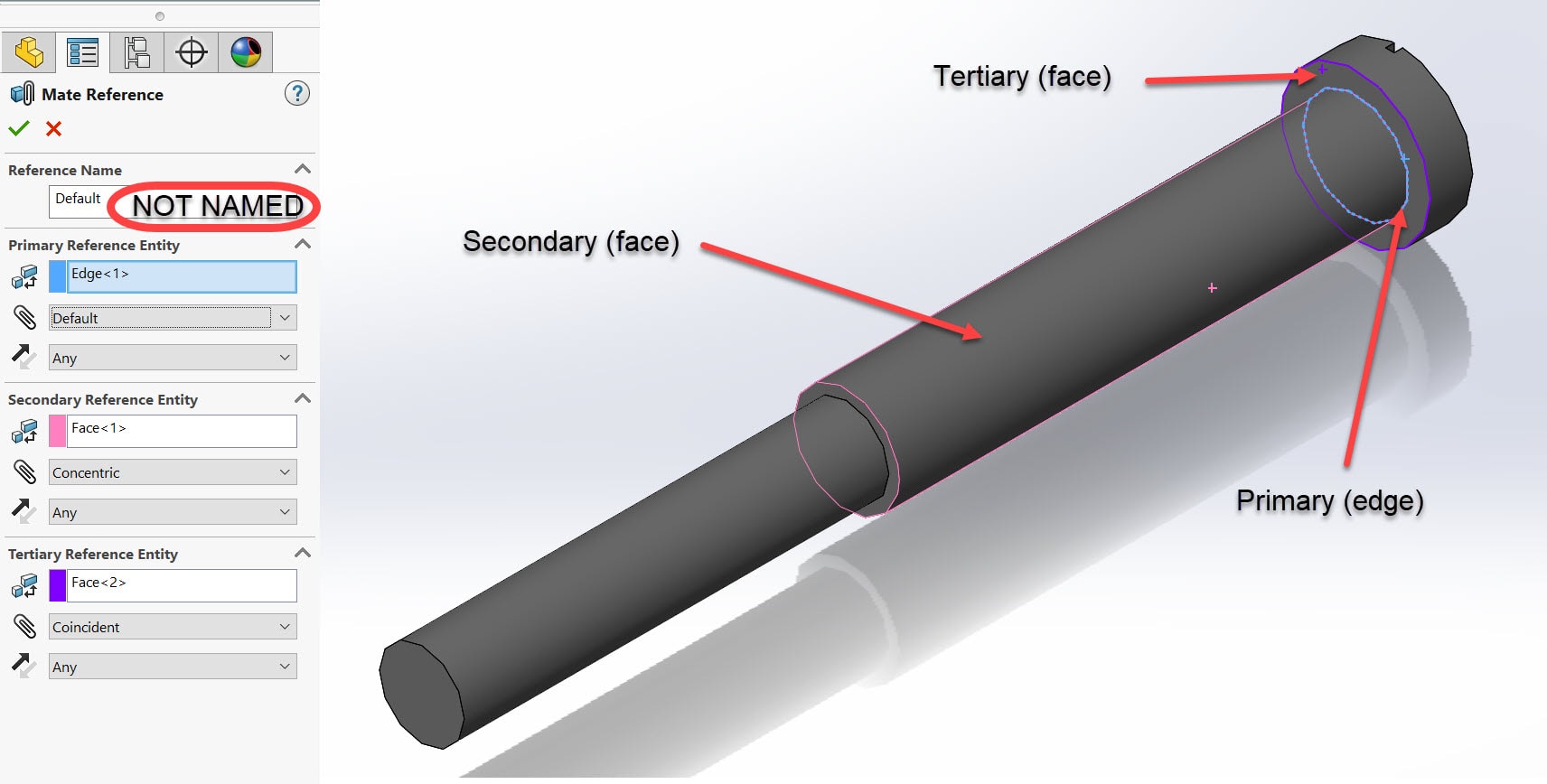 The circular edge under the head is chosen for the PRIMARY reference. This is the “best case scenario” that would give us 2 mates (Coincident and Concentric) if the user dropped it onto another circular edge. The Secondary and Tertiary references do NOT have to be specified, but in this case, they are being used as “back up” possibilities. For example, if the user does not drop the part onto a circular edge and the Primary is not satisfied, then at least if they drop it on a cylindrical face it will mate Concentric to it. If all the user does is drop it on a flat face then at least the underside of the head will be mated Coincident to the flat face.

Now consider this example of a Mate Reference with a name…

Once you give it a NAME it works totally differently. The order that you select the faces for Primary, Secondary, Tertiary isn’t for priority anymore. They are ALL going to be used. 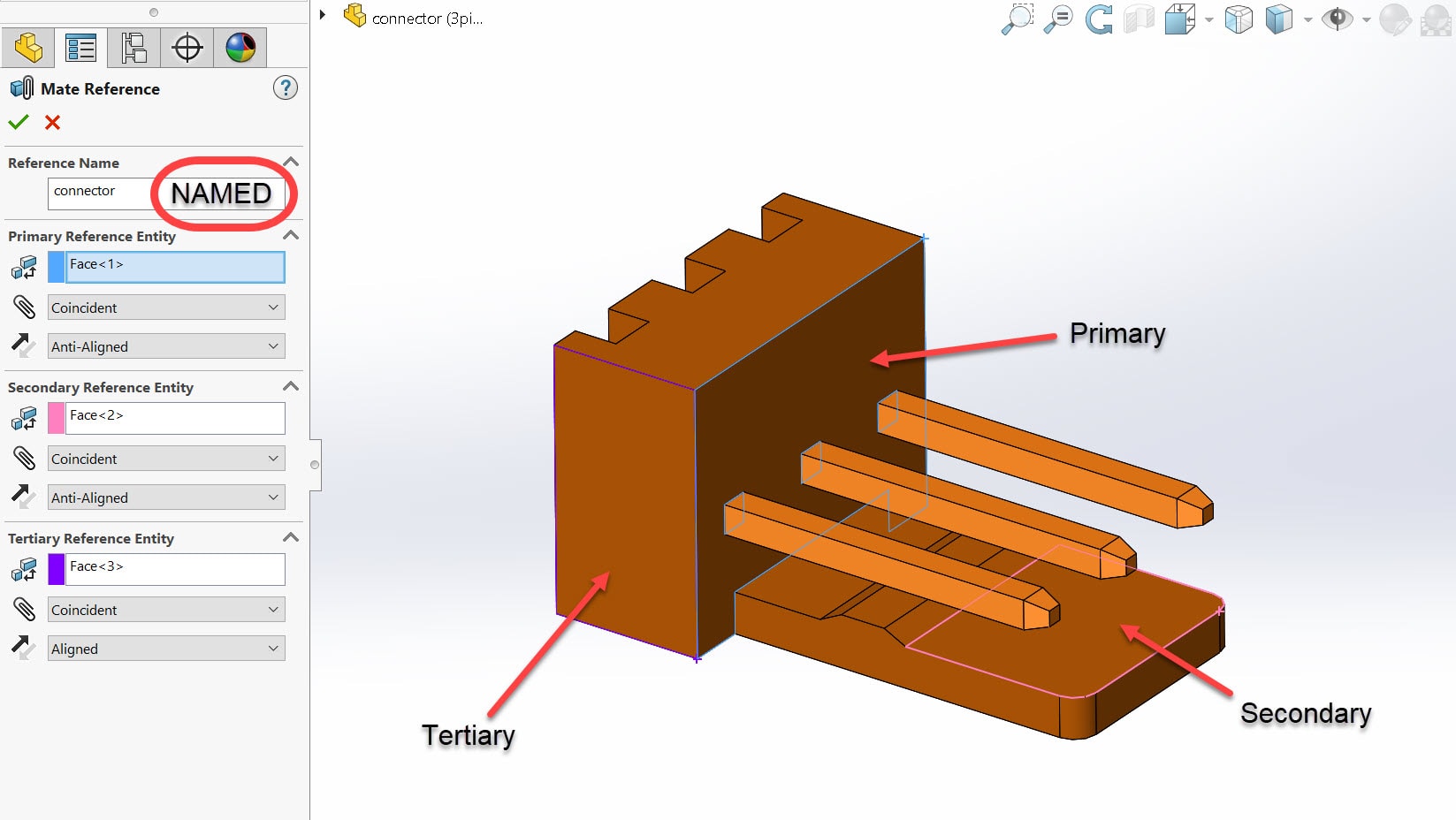 We also have another part with a Mate Reference with a name, AND more importantly has corresponding faces that “match” and they were selected in the same order for the Primary, Secondary, and Tertiary… 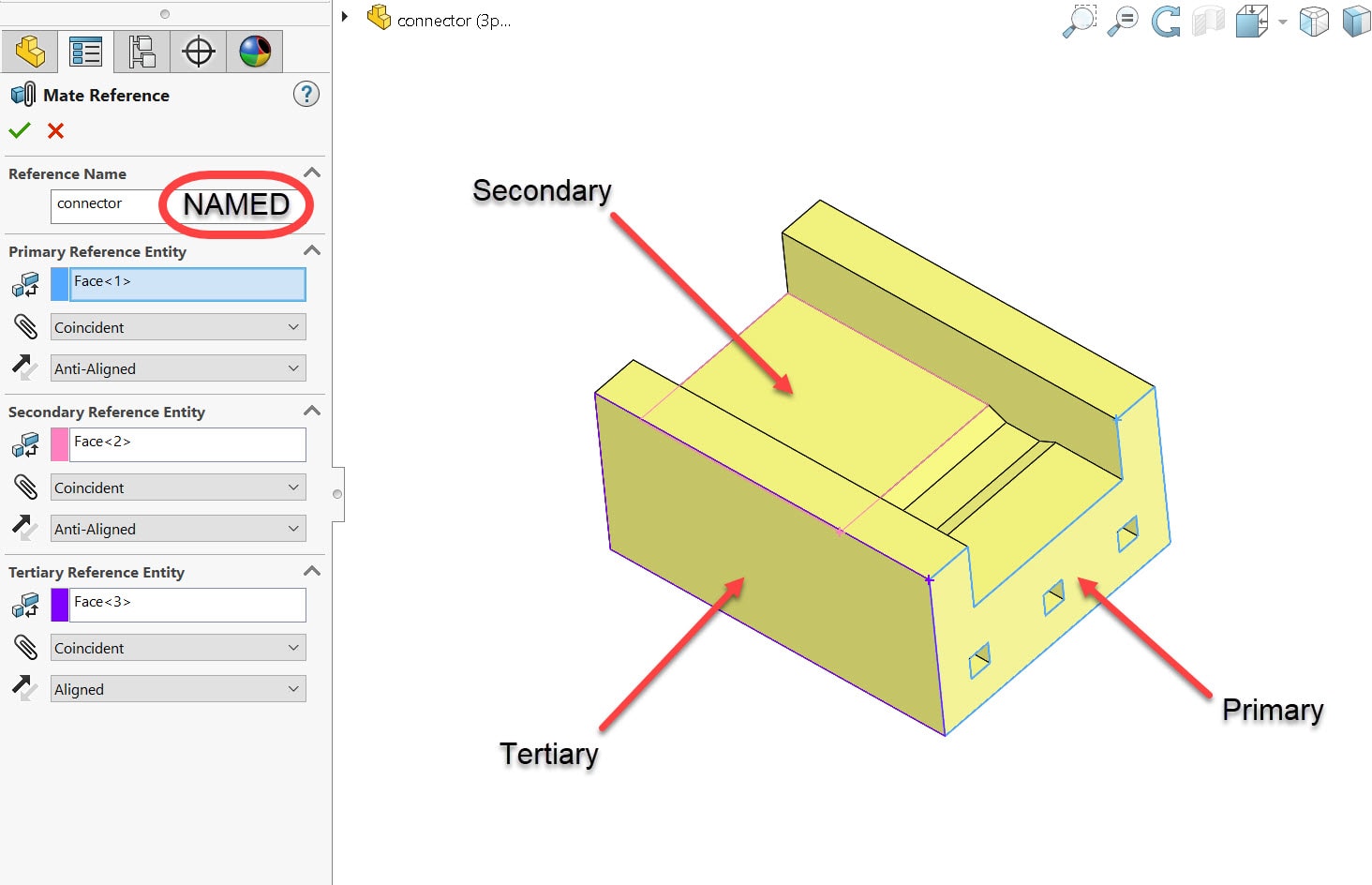 When you get these two parts into an assembly and you get them close to each other they will snap together and use ALL 3 references to fully define the position of the component!

Both of these methods can save you a ton of time assembling your next project if you just invest a little time up front creating some mate references in your frequent parts! Give it a try!

NOTE: It is widely misreported in many places that the names of the Mate References have to MATCH for this second way to work. THAT IS NOT TRUE. They just need to have the same number of faces, edges, etc and be selected in the same order. The NAME is NOT important.