New "Bounding Box" in SOLIDWORKS 2013 (NOT just for Weldments) !

If you attended one of 3DVision’s “What’s New in SOLIDWORKS 2013” rollouts or even if you were a good user and read the “What’s New” guide for 2013, you hopefully saw something about the new automatic BOUNDING BOX that gets created for plates in Weldments.
But, if you don’t do weldments you may have also thought, “SO WHAT ?!”

Well here is WHAT…

You can use the new automatic bounding box tool for ANY kind of part !!

Say for example you want to find the material needed to machine a part.
Once you get any SOLIDWORKS part modeled (or imported), use the INSERT–WELDMENTS–WELDMENT feature to “turn it into a weldment” (even though it really isn’t), then Rt+Clk the “Cut list” item in the Feature Tree and choose UPDATE.  Expand the “Cut list” item in the tree, Rt+Clk the “Cut-List-Item1” folder that got created, and choose CREATE BOUNDING BOX. 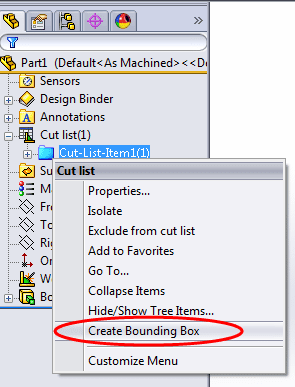 You could add reference dimensions to the bounding box if you wanted to actually show some dimensions, OR if you just want to know what the dimensions of the box are, guess what you Rt+Clk on ??
Yep, the “Cut-List-Item1” folder once more, and this time choose PROPERTIES.
In here you will see the Thickness, Length, Width, and Volume of the 3D Bounding Box !

AND of course, if you make ANY changes to the size of the part file, the bounding box updates !

Pretty great new feature in SOLIDWORKS 2013 that can save you a lot of time and definitely NOT just for Weldments!!