Everyone loves SOLIDWORKS PDM’s data cards, they are used in so many ways. One limitation though is their values in drop-lists is rather limited. You can control the lists based on one other variable, but if you need something more advanced you are going to need PigeonHole. It can make your drop-lists significantly more advanced.

A lot of people like PigeonHole for its ability to have SOLIDWORKS PDM Pro’s droplists filter each other. As an example if you were selecting a wooden lift gate, you wouldn’t want all of the width selections available in the “Width” droplist, -only 16’. 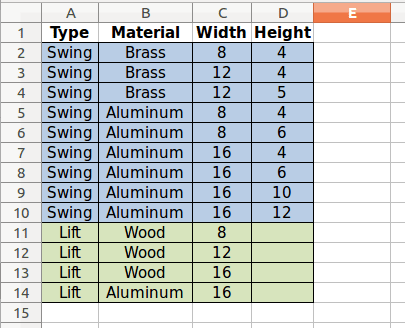 You can actually use an Excel spreadsheet like the one above and connect it to PigeonHole. Excel can technically be used as a database.

Now, as a warning, just because you can does not mean you should! At least in a production environment. Excel is not built to have many people accessing it at once, and it isn’t built for speed when accessed in this manner. If your lists are very long, you will quickly notice that PigeonHole takes some time before the droplists are refreshed with new information after you make a selection. However we all make Excel lists (you’ll notice the image above is an Excel screen shot) when we preliminary plan our droplist filters.) and the ability to test the logic quickly by connecting PigeonHole to a spreadsheet is VERY handy!

So test with Excel, then when you are happy with your logic either import your Excel table into a SQL table (if you know how to write SQL queries) or use PigeonHole’s native list building capabilities.