One of my favorite new features in SOLIDWORKS Visualize Professional 2019 is the ability to create decals using video images. We can now apply decals using *.mp4 and *.avi files, just as we would with static image files in the past. This functionality makes simulating screens in animations, like the video below, incredibly easy.

Notice that in this video, the animated decal actually emits light into the scene. Just like standard decals, we can control appearances, mapping, and more with video decals. Let’s take a look at some other cool effects and tricks that are possible with video decals in Visualize.

The Seattle Sounders just finished a roller coaster of a season that unfortunately ended in elimination at the hands of the rotten Portland Timbers. To commemorate this season, I wanted to animate a Sounders crest model with some highlights from the season. I started by importing the model into Visualize using an appearance grouping. 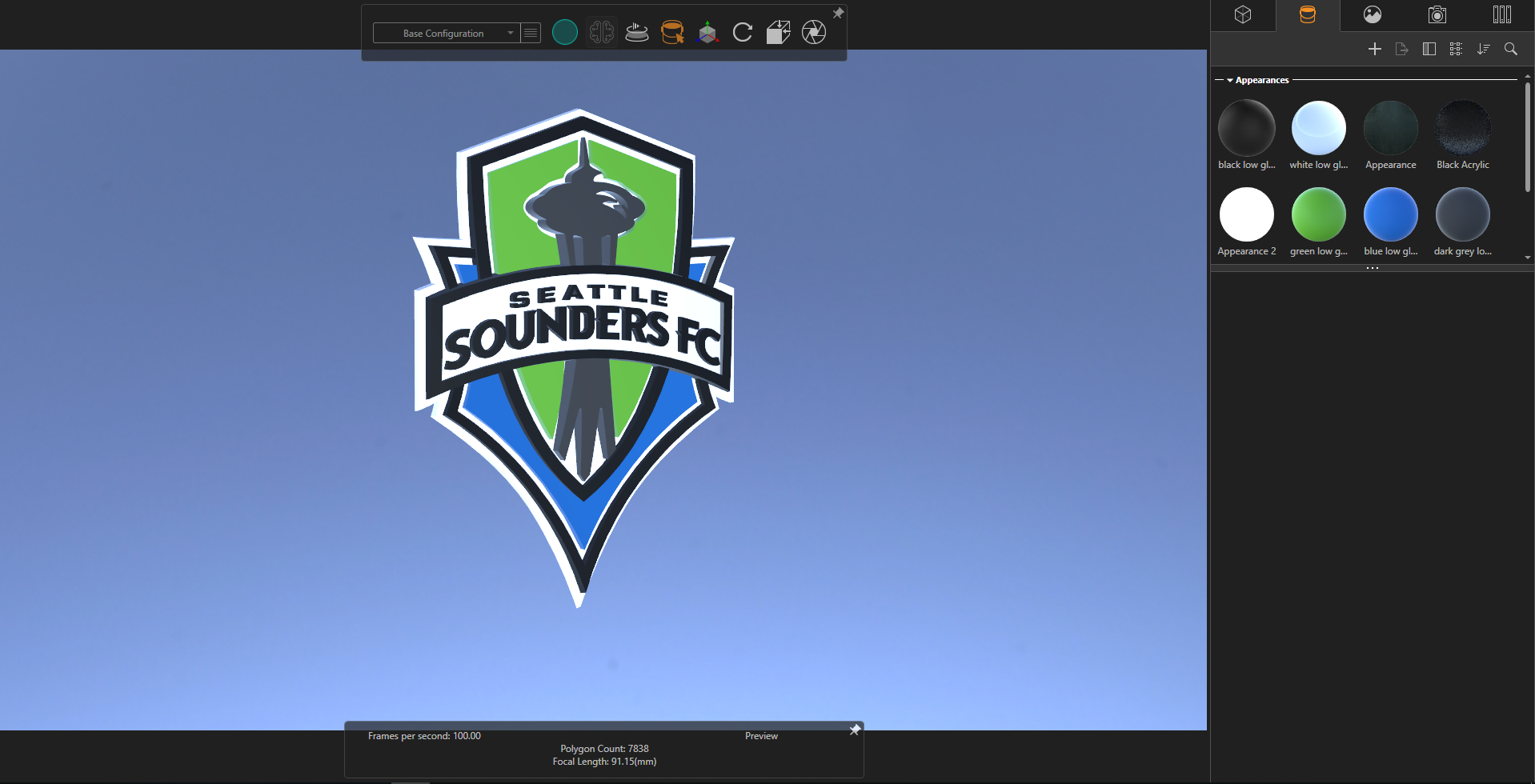 Since all the colors had already been set up in SOLIDWORKS, this process was easy. After tweaking the colors to get them just right and adjusting the background and lighting, I was ready to apply the video decals. Simply right-clicking in neutral space in the appearance tab, mousing over “New Decal”, and choosing “Video…” opens a window to choose a video file for the decal. 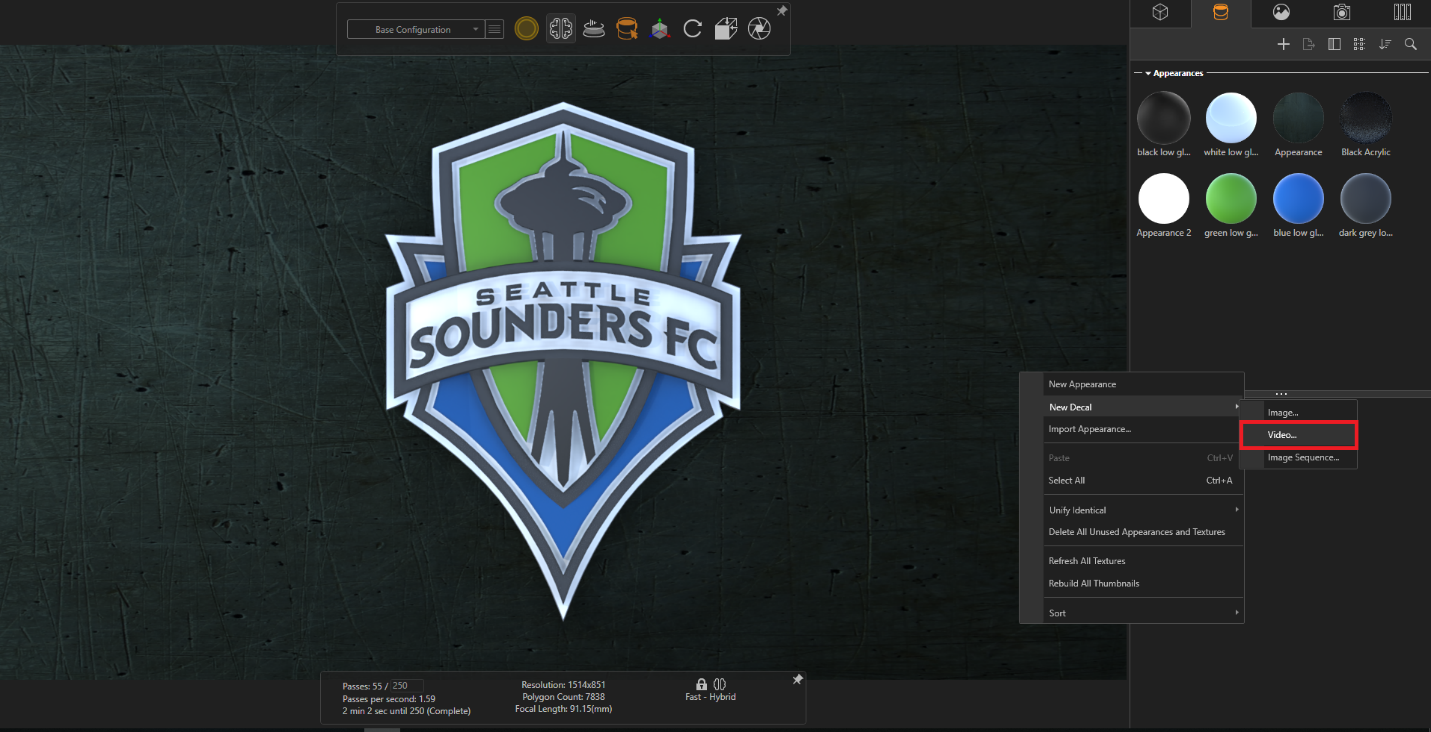 Importing the video inserts the video’s timeline into the Visualize timeline. This allows the video decal to be perfectly synced with the animation. We also have full control over the mapping: in addition to standard Planar, Spherical, and Cylindrical mapping, we can even use UV mapping. I went with a Planar decal map here and adjusted the size and position to fit the back of the shield. 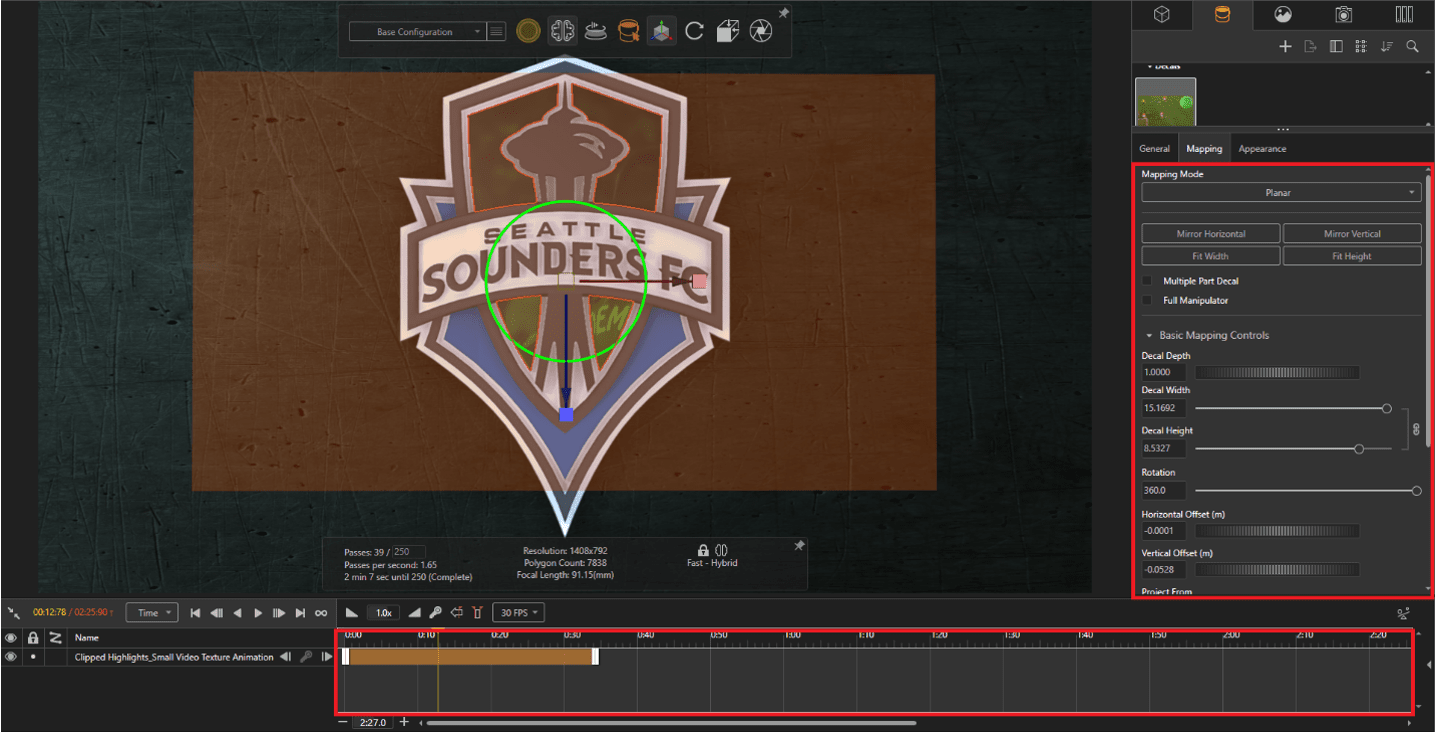 Since I wanted to selectively apply this decal to other portions of the crest, I imported the video two more times and matched up the mapping. I also applied the existing colored appearance to the decals to retain the colors in the crest. 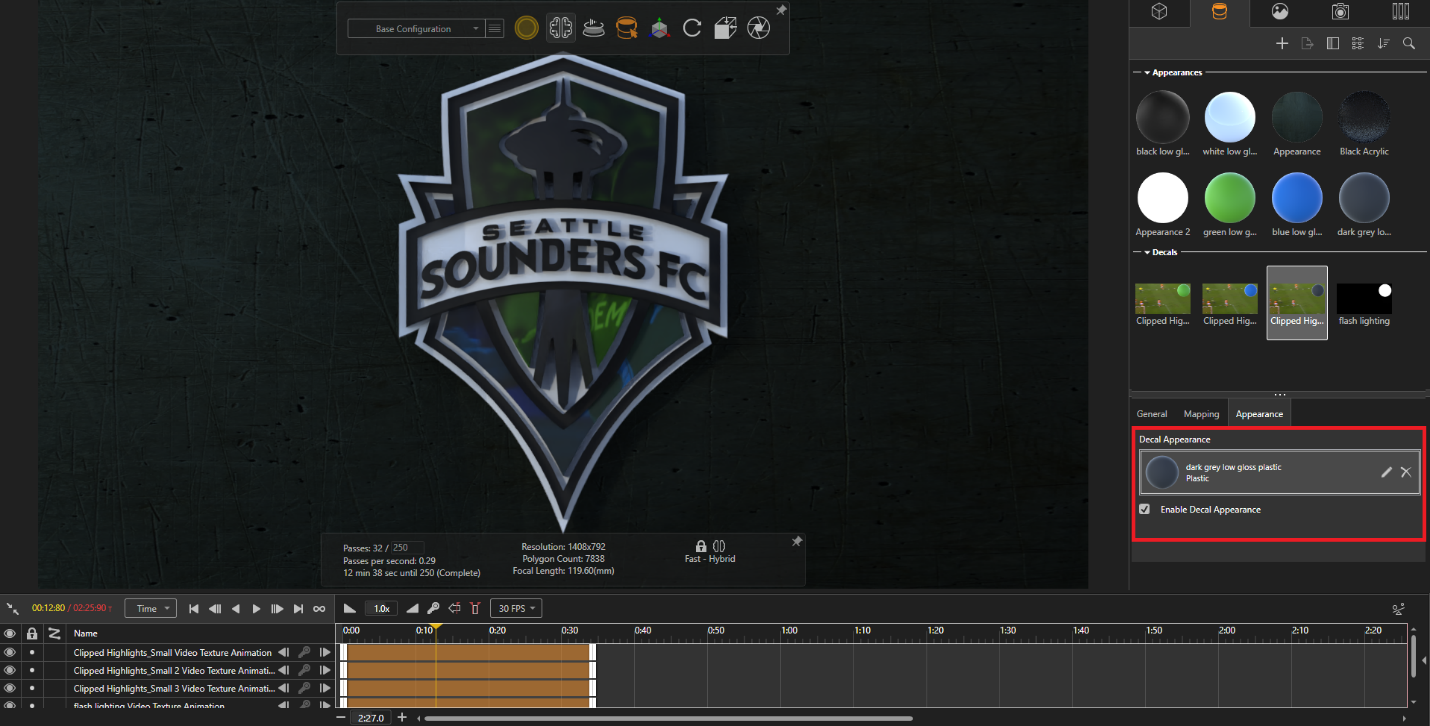 I wanted a way to add some time-based lighting to the project. To accomplish this, I added a curved surface and applied another video decal of some stock footage of camera flashes (video located here, if you’re curious) to it to mimic stadium lighting flashes. Applying an emissive appearance to this decal allowed it to cast light into the scene when flashes occur. 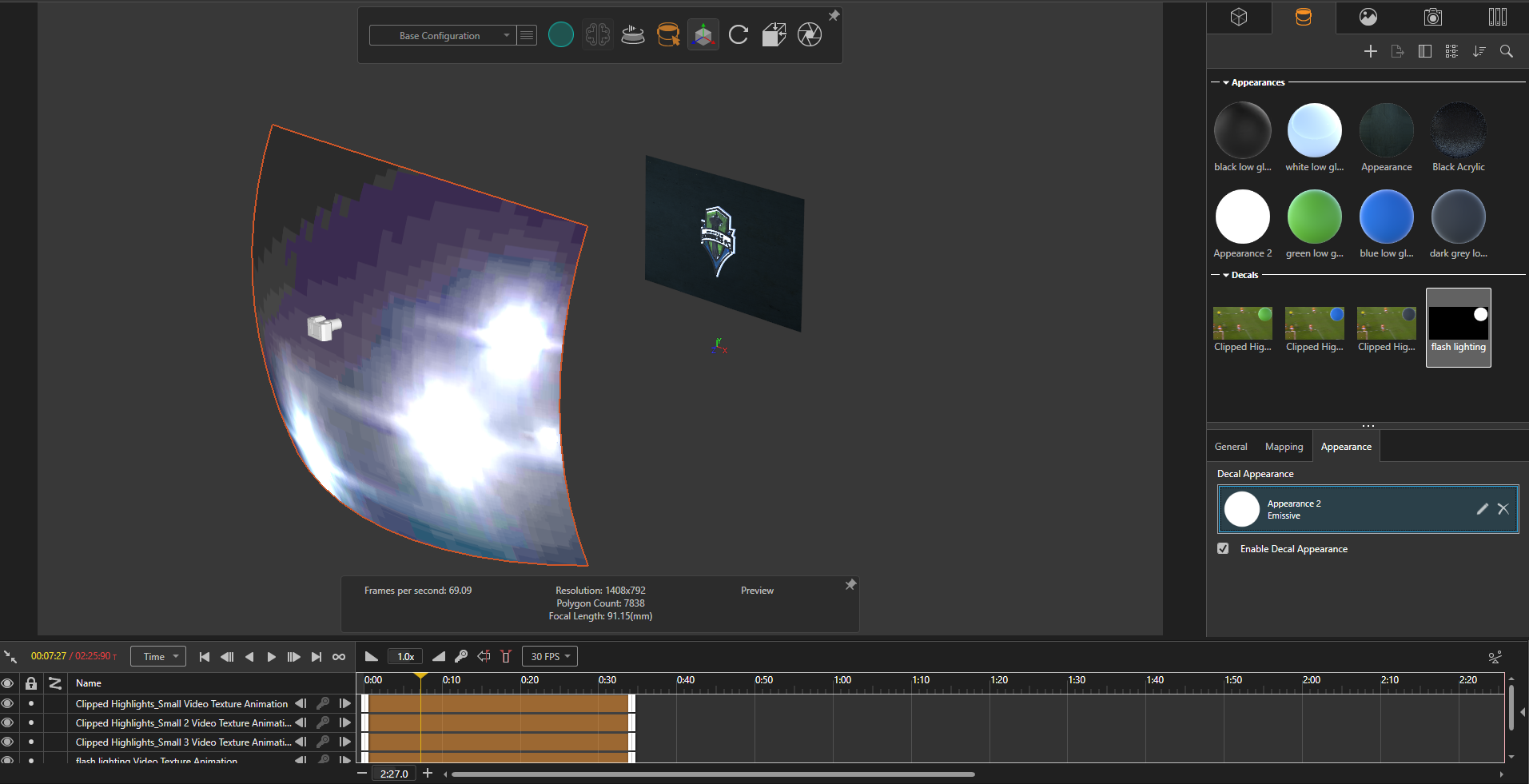 This made for an incredibly easy (seriously, I can’t stress how easy this was. SO EASY) way to simulate dynamic lighting without actually having to create any lights in Visualize. After the lighting was set up, the animation was ready to be rendered! Below is a link to the final render.

You do need to watch out for the increase in render time when working with video decals. Visualize has to decode each frame of the video decal in its rendering process. Even with the new denoiser, using video decals can increase render time significantly. To get an understanding of how much that time increases, I did a render of the 30-second long animation with the decals suppressed in preview mode and compared it to a preview mode render with decals on. The differences are tabulated below.

As you can see, with the four video decals on render time increases by a factor of about 6. In other words, each video decal increased render duration approximately 1.5 times. The resulting decal render time,

can be approximated using the following equation:

Number of video decals in the project

This project was admittedly a proof of concept, as I was curious to see how Visualize would handle video decals. In reality, you most likely will not have as many decals in one project. That said, using a technique like this to set up lighting was so easy that I wouldn’t hesitate to use it again and queue a render job overnight or over a weekend.