SOLIDWORKS World 2017 - Creating the New, the Next, and the Never Before

Over 5,000 people are gathered at the Los Angeles Convention Center until February 8th for SOLIDWORKS World 2017, which started yesterday amid the buzz and excitement of the Super Bowl.

As if SOLIDWORKS World alone isn’t enough buzz for SOLIDWORKS software enthusiasts. Every year, this passionate and global community of engineers, innovators and partners gather together to share ideas and learn about the latest in 3D design. 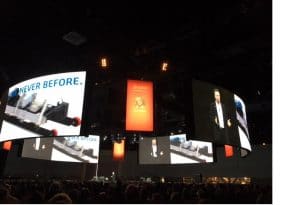 This morning, the general session began with magician Justin Flom from Illusion Projects known for the design and manufacture of magic act props involving sawing people in half among other jaw dropping tricks. Gian Paolo Bassi, the CEO of SOLIDWORKS, Dassault Systèmes who was on stage to deliver his Special Welcome speech became part of the magic show when the magician asked him, “Would you trust your life to something made in SOLIDWORKS?” He was referring to a table saw type of machine on the stage designed in SOLIDWORKS for magic tricks.

Sure thing, Mr. Bassi put his head on the table saw machine and after the blade went across and the trick was done with no pain or blood involved, the audience clapped. Not only was Mr. Bassi a good sport, he believed in the power of SOLIDWORKS to design a reliable machine that would work as it was intended to.

Breaking the Bounds of the Possible

In his Special Welcome presentation that followed, Mr. Bassi looked out at the audience and said, for the next few days together we will discuss the future of engineering and design. To illustrate his point, he showed a series of customer example videos from automotive to aerospace and defense to industrial equipment and robotics. Innovators who are using design technology to break the bounds of the “possible” and create the next great thing that has never been done before. A theme he called “Creating the New, the Next and the Never Before”. 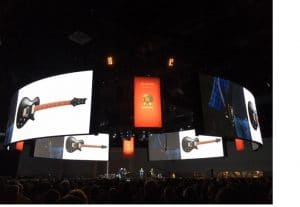 After Mr. Bassi’s inspiring presentation, the audience was treated to an example of SOLIDWORKS used for rock n’ roll. Paul Reed Smith and Jon Wasserman from PRS Guitars joined Mark Tremonti, guitarist of Alter Bridge and Creed, to share the story of their collaboration for the design and development of the Mark Tremonti Signature guitar. Mr. Tremonte demonstrated the guitar with guitar solos that rocked the audience.

On the Cutting Edge of Technology Trends

Bernard Charlès the Vice-chairman and CEO of Dassault Systèmes and Monica Menghini the EVP and CSO of Dassault Systèmes each delivered presentations that highlighted how the company is providing more connected, collaborative, and efficient ways of designing to help customers usher in the next generation of amazing products and innovations to change the world. Technologies highlighted included the Internet of Things for smart products and smart manufacturing and augmented reality, and additive manufacturing.

The Future is Now

Jason Silva, best known as host of National Geographic’s hit TV series, Brain Games, took the stage to round out the topics with his perspective on the role of technology in design and manufacturing for today and the future. His presentation followed a stream of thought on everything from innovation, futurism, creativity and imagination.

After a day of inspiring presentations, networking and talking to exhibitors in the partner pavilion day one of SOLIDWORKS delivered on its promise of bringing together its passionate community to share ideas and learn about the latest in 3D design…and more.