The Secrets of SOLIDWORKS Service Packs

Most times, when we talk about the version of SOLIDWORKS we use, we describe it in yearly terms such as 2015, 2016, or 2017. There are also times when we’ll specify a bit further, including the SOLIDWORKS service pack we’re using such as SP0.0 vs. SP5.0.

Every year, the newest version of SOLIDWORKS is showcased in launch events to show people top highlights of the new enhancements and features they can expect. However, with service packs, most people don’t get a great deal of visibility into what changes have been made between, for example, SP0.0 of a given year’s version and SP1.0 of that same release.

In this post, we’ll go over the basics of what a service pack is by answering some common questions we hear people ask. We’ll also cover some of the lesser known facts regarding SOLIDWORKS service packs. 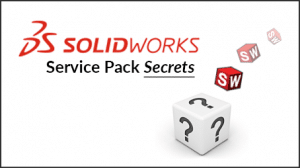 What is a SOLIDWORKS service pack?

SOLIDWORKS service packs are service patches that append fixes/new functionality to your software. Each yearly installment of SOLIDWORKS begins at SP0.0. Historically, each yearly release sees about five or more additional services packs after the first.

Subscription customers can download and install the newest service pack of SOLIDWORKS as they’re released. You can access them by logging into your Customer Portal account, Check for Updates, or via background downloader provided filesets on your computer.

Will I see an impact on the performance of my installation if I install the latest service pack?

The responsible answer here is “maybe.” As SOLIDWORKS scales in its offerings, it naturally includes more functionality and more code. We’ve also seen the “type” of user SOLIDWORKS attracts expand rapidly. Some of us use the software to make simple, small parts. Others make colossally-huge assemblies. These usage cases involve vastly different types of features.

What if I’m on a different service pack of SOLIDWORKS than my coworker? Does that matter?

This is a great question. In terms of interoperability, you should be able to open and work with your coworker’s files if, for example, you’re on 2016 SP4.0 and he/she is on 2016 SP5.0.

If your company is using SOLIDWORKS PDM, there may be other considerations to consider. In SOLIDWORKS 2017, PDM Standard and PDM Professional can be on separate service packs of the same major version. For example, if your vault is version 2017 SP0.0, you can connect to it with a client machine installed at version 2017 SP1.0.

How does SOLIDWORKS decide what will be worked on or enhanced for a particular service pack?

SOLIDWORKS uses a combination of customer feedback and aggregated performance data to influence what R&D works on for a particular release. It prides itself on being a customer-driven engineering company.

That sounds nice, but how can I make sure my company’s voice is heard?

If your company has an idea for a performance improvement or a new feature, the best way to let SOLIDWORKS know this is by filing an Enhancement Request via your Customer Portal account. In the interest of fairness, the position of your request can improve based on the impact of the request and the amount of similar requests created by your peers.

If you feel a certain part of SOLIDWORKS, small or large, is not performing as designed, we encourage you to contact CATI’s technical support. We’ll take the time to examine the issue with you. If needed, we can make sure your inquiry is processed directly to SOLIDWORKS and give you an idea of where the inquiry currently stands.

Once my enhancement idea is processed, how will I know whether it ever gets approved or scheduled for a future release?

When your requests are processed, your email address is tied to your particular request. Your local technical support representative is also attached to this request. When your request is formally scheduled, you will both receive an email providing its scheduled release date.