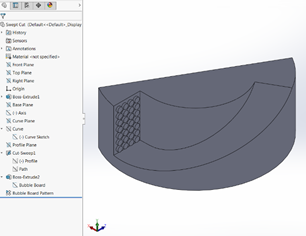 Shown to the right is the final part. This part involved creating; a boss, profile sketch, path sketch, projected curve, swept cut, second boss, and a linear pattern. That Swept Cut required a few separate sketches in order for it to be successful.

A Swept Cut needs a:

The trick to a swept cut such as this is making the Profile Sketch larger than the boundaries of the part. The reason why it is good practice to do so is because on complex curves often it will create a zero thickness geometry error. Making sure the sketch extends beyond the edges of the part relieves the possibility of this error occurring. 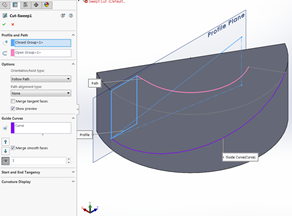 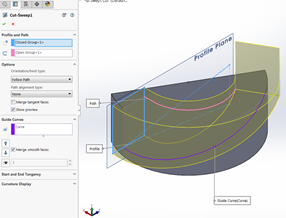 The Profile Sketch shown on the left had its sketch aligned with the boundaries of the part. This Profile would not even generate a preview, and when attempting to accept the Swept Cut you receive the error "Sweep operation failed to complete".

The Profile Sketch shown on the right had its sketch extended beyond the boundaries of the part. As you can see, it is not only shown in the preview of the cut but it is shown to have zero errors when the command was accepted.

Just remember that when creating a profile for a command such as a Swept Cut, make the profile extend beyond the edges of the part for a successful command.