Tips for Faster Dimensioning in SOLIDWORKS

In the CAD world, there are few things that might be more important than correct dimensions. And like all parts in the design process, the quicker the better. SOLIDWORKS has designed a variety of methods that allow for quick and efficient dimensioning.

Let’s first take a look at all of the dimensioning options. They are found on the far left of the Sketch tab on the CommandManager. 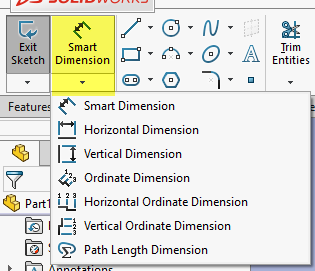 For me personally, I by far use the “Smart Dimension” command the most. This will do all of the different dimension types except for ordinate style dimensions. There are also a variety of methods to start a dimension that are quicker than going up to the CommandManager each time new dimensions are needed. Most of these tips come from practices I have observed while teaching:

Tip 1: Unless your standards require Ordinate dimensioning, USE “SMART DIMENSION”!

It does not matter if you are doing a vertical, horizontal, diagonal or path length dimension, it does them all. It’s practically the one stop shop of dimensioning.

When dimensioning a line that is not set to be vertical or horizontal or when dimensioning two points that are likewise not constrained; as mentioned above it will give you the option of creating a horizontal, vertical, or diagonal dimension. Oftentimes, this can be very finicky and can jump from one to another by moving the mouse very slightly. To lock the dimension into the desired style, move the mouse to a location giving the correct style and right-click. This will allow you to position the dimension and create it.

Tip 4: Don’t use the CommandManager!

There are alternatives to the CommandManager: 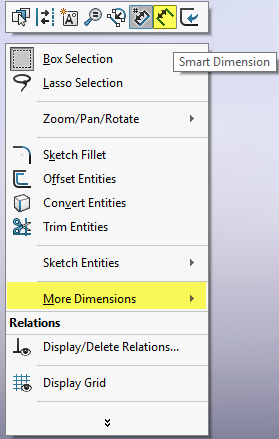 I hope these tips help to make your design process faster than ever.