Switching CAD Software: What Improvements Should You Expect?

Switching to a new CAD software system requires an investment in time and money. Which raises the question of what kind of a return can you expect on that investment? Tech-Clarity, an independent research firm that specializes in CAD and related technology, recently surveyed 192 companies that have switched CAD software systems to find out what benefits they had achieved and was it worth the effort?

The survey showed that companies have reported significant improvements, starting with a substantial reduction in the amount of time required to bring new products to market. Top performing companies reduced product development time by 19% and time to implement engineering change orders (ECOs) by 15% while average performers reduced product development time by 14% and ECO time by 8%.

The changes were achieved despite the fact that the efficiencies provided by the new CAD systems enabled top performers to increase the number of design iterations by 17% while average performers achieved a 9% increase. Increasing the number of design iterations made it possible for these companies to add new features, increase product performance and improve design quality. 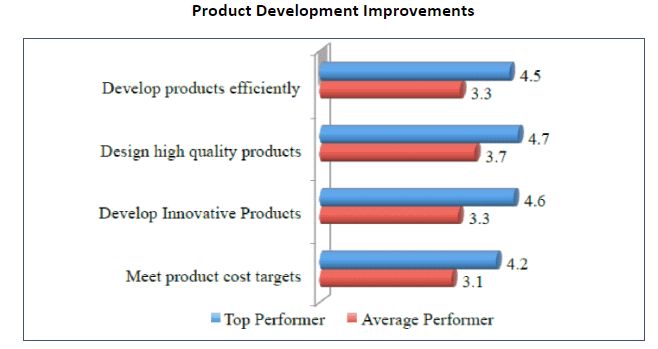 Both top performers and average performers reported substantial improvements since implementing their new CAD software as shown in the graph above. By the way, top performing companies were identified through a question that asked companies to rank their performance relative to their competitors on a scale of one to five with five being extremely effective and one being not very effective. The top 20% were defined as top performers.

As a case in point, Induce Design, a design services company, switched to a new CAD software package that is easier to use and offers more complete modeling capabilities. The software can also be extended with design for manufacturability tools. Since implementing the new CAD software, Induce Design has reduced design cycle time by 30% and shortened the time to make design decisions by 30%. Hrishikesh Borude, Owner and Principal Designer of Induce Design, attributes these improvements to the intuitive user interface of the new CAD software and its ability to help the firm communicate more effectively with its clients. 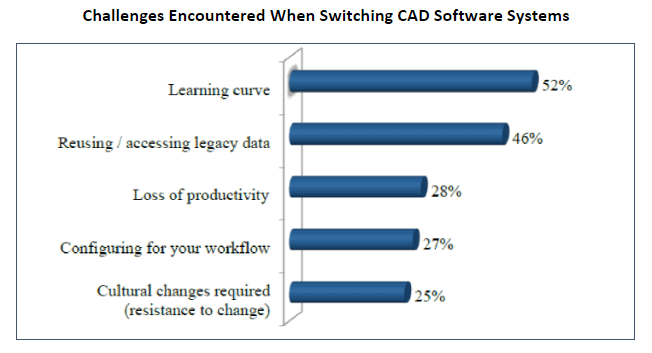 These improvements are impressive but they raise the question of how much time and effort is required to switch CAD software systems? Tech-Clarity asked the companies what challenges they had encountered when switching. As the graph above shows, 52% of the companies encountered a significant learning curve while 46% experienced challenges in reusing and accessing legacy data.

Tech-Clarity dug deeper by asking the survey respondents to quantify the time spent implementing and their satisfaction with their new CAD system. Here again, top performers led the pack by taking 13 weeks to regain the level of productivity they experienced with their old system and 46 weeks to achieve a complete payback of their investment in their new CAD system. Average performers regained their previous productivity levels in 21 weeks and achieved payback in 50 weeks. Both top performers and average performers told Tech-Clarity that they were happy with their decision to switch CAD software systems but, as you might expect, top performers were the most satisfied, ranking their satisfaction at 4.7 on a scale of 5 as compared to 4.0 for average performers.

The overriding conclusion from the survey is that companies that implemented new CAD software systems experienced challenges but then went on to overcome them and achieve substantial benefits that have helped them bring better products to market in less time.

The survey finds that: “Quickly developing high-quality, innovative products more economically helps companies differentiate and stand out from competitors. Investments in the design process can help companies achieve this… In many cases, companies have found a switch in CAD tools has had a very positive impact on their business.”